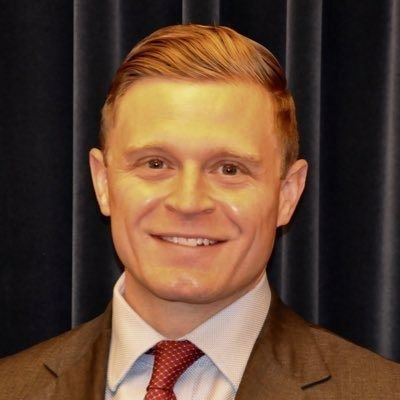 The short special election campaign in Iowa House district 37 has been a costly affair, as expected. Disclosures filed last week show the Iowa Democratic Party has spent $306,470.21 on behalf of Andrea Phillips, while the Republican Party of Iowa has spent $234,327.12 supporting Mike Bousselot.

As is typical for targeted Iowa legislative races, the bulk of the spending has gone toward television and digital advertising: roughly $285,000 on the Democratic side and just under $230,000 from Republicans.

Bleeding Heartland analyzed the introductory ads for Phillips and Bousselot here. During the last two weeks of the campaign, I've seen more negative advertising about both candidates on Des Moines-based broadcast and cable television. The difference is that the Democratic ads highlight truthful claims about Bousselot's past work, whereas the Republican ads are wholly false--much like the spots they ran against Phillips in 2020.

I apologize for the poor quality of these videos. One of my longstanding pet peeves is that Iowa legislative candidates (from both parties) post their positive ads on social media but don't share the negative spots. Even when the commercials are entirely accurate, and the candidates should have nothing to fear from being fact-checked, I've had trouble obtaining a video from the campaign. For that reason, I recorded these ads using my phone while watching local newscasts in early September.

LIES ABOUT A SUPPOSEDLY "ALARMING" AGENDA

Viewers are told Philipps' "agenda for Iowa is alarming." First, the ad claims Phillips signed an "extreme left wing pledge" to defund the police, leaving Ankeny residents vulnerable to violent crime. But the Future Now Fund pledge did not refer to "police" and did not call for cutting law enforcement funding, according to a letter from Phillips' attorney Shayla McCormally (enclosed in full at the end of this post) and a copy of the pledge obtained by Gavin Aronsen.

Furthermore, Phillips told Bleeding Heartland, during a September 1 candidate forum organized by the Ankeny Chamber of Commerce, she said directly, in Bousselot's presence, “I do not support defunding the police; I never have.”

The commercial then repeats another lie Republicans aired on tv in 2020, when Phillips was challenging State Representative John Landon. Viewers are told that "for a decade, Phillips worked closely with the Chinese government" on deals to outsource American jobs to China. In reality, Phillips served on the Board of Governors of the American Chamber of Commerce in Shanghai, advocating for U.S. businesses and briefing companies seeking to export goods to China.

McCormally wrote to Bousselot on September 3, demanding that his campaign take down the "false, misleading and defamatory" commercial. Neither the candidate nor his representatives replied to the letter, nor did they pull the ad.

Phillips released a video "setting the record straight" on September 8.

In a September 10 email to Bleeding Heartland, Phillips described the GOP strategy as "dirty, underhanded politics," adding that "it’s a real shame that they’re getting away with making up blatant lies. It’s an unethical, unprincipled, unscrupulous way to win an election, and it tells you a lot about how he would govern." Voters in House district 37 "are sick of this kind of politics," she said.

One more point worth noting: after I wrote about Bousselot's positive ad, several readers reached out to ask about the baby the candidate's wife is shown holding. Bousselot's bio says he "lives in Ankeny with his wife Holly" but does not mention any children. Sources who know the family told me to their knowledge, Bousselot and his wife do not have a baby. The candidate didn't respond to my emails or Facebook messages, so I wasn't able to ascertain whose baby is pictured—or get answers to any of my other questions. The ad is clearly designed to imply the Bousselots are parents of a young child, as are many Ankeny residents.

The negative ad funded by the Iowa Democratic Party highlights work Bousselot did as a senior staffer for then Governor Terry Branstad. He was the main person in the governor's office working on Medicaid privatization.

The spot cites three newspaper articles from 2015. Jason Clayworth reported for the Des Moines Register in August of that year on a possible "game of pay to play," as Branstad and top legislative leaders "accepted tens of thousands of dollars in campaign contributions from some of the companies that vied for lucrative contracts to manage Iowa’s annual $4.2 billion Medicaid program."

Clayworth reported in October 2015 on emails that showed Chris Rants, a lobbyist for one of the for-profit companies, met with or spoke to Bousselot repeatedly during a "blackout period" when such communication was prohibited prior to the state awarding contracts.

The violations led to one company (WellCare) losing the opportunity to offer managed care to Iowa Medicaid recipients. The Cedar Rapids Gazette reported in November 2015 on Administrative Law Judge Christine Scase's decision. The Democratic commercial quotes from this part of that article.

In her ruling, Scase indicated she was troubled by the contact. She wrote that Bousselot was 'certainly in a position” to influence the content of the bidding documents, as well as the 'ultimate decision.” In referring to the communication Rants had with him, she wrote, 'this conduct violated” bid rules.

The only fact this ad got wrong was the date in August 2015 that the Register published Clayworth's "pay to play" article. The substantive claims were accurate. Bousselot is a political insider. He gave special access to insurance company lobbyists, who were aware of plans to privatize Medicaid long before Branstad announced that policy to the public. Bousselot also tainted the bidding process by communicating with a lobbyist during the blackout period.

I have no idea whether either party's negative ad will resonate with Ankeny area voters. We'll find out in about 48 hours.

Final note: the Polk County elections office had received 3,366 completed absentee ballots as of September 11, staff told Bleeding Heartland. That includes people who voted early in person as well as those who mailed ballots.

Of those ballots already at the county auditor's office, 2,344 came from registered Democrats, 757 from Republicans, 260 from no-party voters, and five from people with some other registration (likely Libertarian or Green). Phillips' lead may or may not be large enough to hold up; Iowa Republicans tend to turn out mostly on election day.

Some 330 absentee ballots requested by House district 37 residents were not back at the county auditor's office before this weekend. Voters should not mail ballots on Monday or Tuesday; any ballot that doesn't arrive by 8:00 pm on September 14 will not be counted.

Voters who haven't yet returned an absentee ballot now have two good options. They can hand-deliver their ballot to the Polk County elections office (120 Second Avenue in downtown Des Moines) by 8:00 pm on September 14, or take the ballot to their polling place between 7:00 am and 8:00 pm on election day. At the polling place they will be able to surrender their absentee ballot and vote with a regular ballot.

Appendix: September 3 letter from attorney Shayla McCormally to Mike Bousselot. Neither the candidate nor his campaign staff replied to the letter, nor did they pull their false advertising. 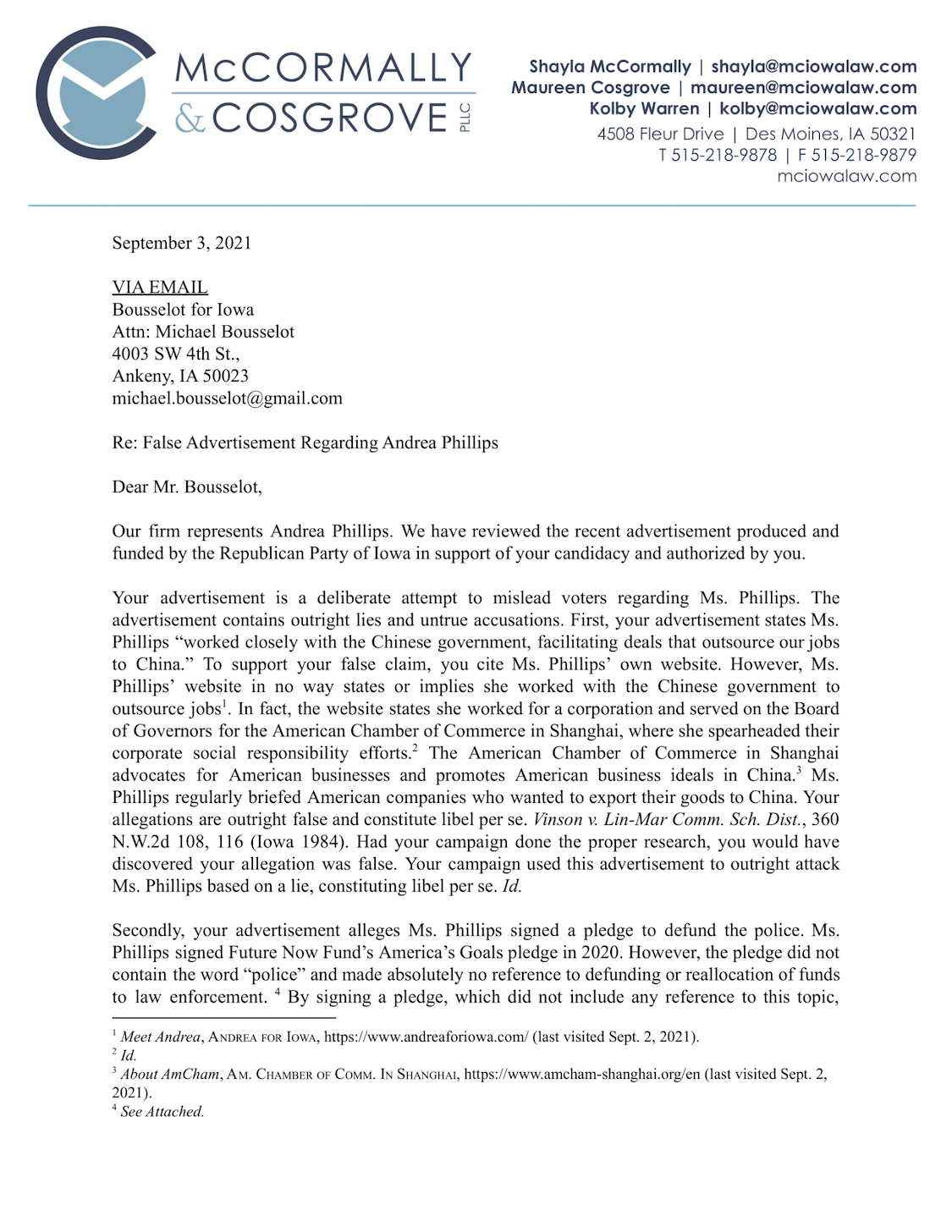 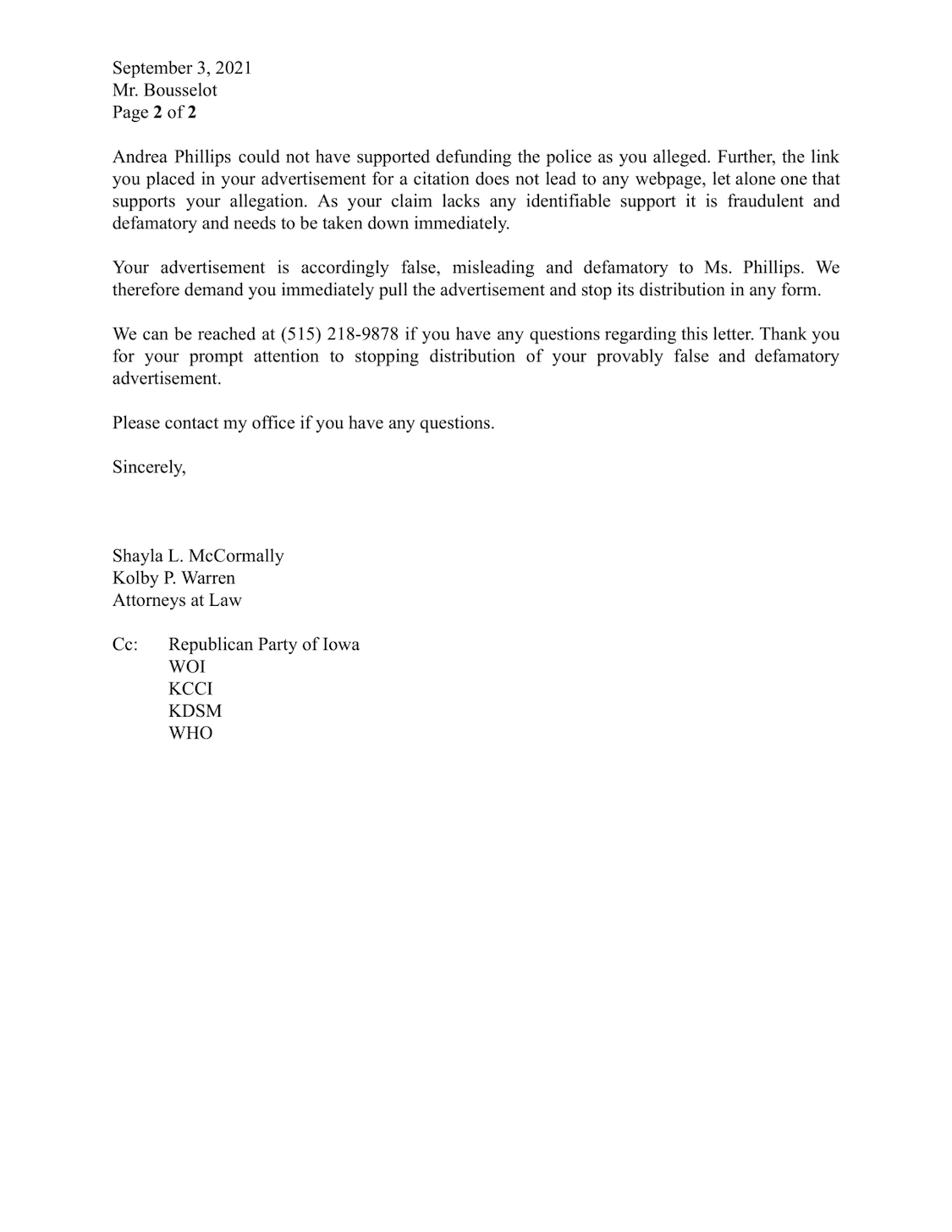