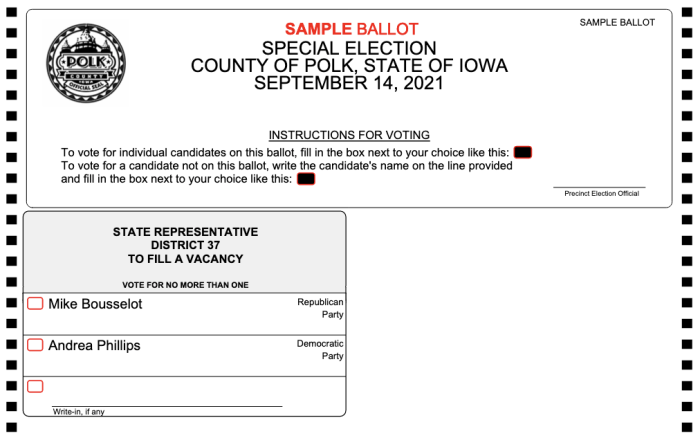 Two weeks before voters will elect a new state legislator to represent parts of Ankeny and northern Polk County, Democrats living in Iowa House district 37 had requested more than five times as many absentee ballots as Republicans.

Polk County Elections Office staff told Bleeding Heartland that 2,818 residents of House district 37 had requested an early ballot by 4:00 pm on August 31. Of those, 2,261 were Democrats, 398 were Republicans, and 159 were affiliated with neither party.

The vast majority of absentee ballots sent to voters have not yet been returned. As of August 31, the Polk County auditor’s office had received 375 completed ballots from registered Democrats and 36 from Republicans.

First, Iowa Democrats have been more likely than Republicans to cast an early ballot in recent election cycles. That pattern was especially pronounced last year. Surging COVID-19 cases and hospitalizations created more incentives than ever to vote by mail, but President Donald Trump and some of his allies discouraged supporters from voting early. According to the statewide statistical report for the 2020 general election, about 76 percent of Iowa Democrats who turned out voted before election day, but only about 52 percent of Republican participants cast an early ballot.

Second, early vote leads don’t always hold up. Democrats led by thousands of absentee ballots in several battleground legislative districts they ended up losing in 2020, including House district 37. Republican GOTV in this state has focused on mobilizing election day voters. While Mike Bousselot and his volunteers have been knocking doors in Ankeny, they didn’t push absentee ballot request forms as hard as did the Democrats getting the vote out for Andrea Phillips.

Third, the population of House district 37 far exceeds that of a typical Iowa House district, and turnout here was very high in 2020. So while we don’t know how many voters will participate in the September 14 special election, we can say that a lead of a couple thousand absentee ballots may be less durable in this district than in one with an average-sized electorate.

Fourth, most of the absentee ballots mailed to House district 37 residents have not yet been returned. Pushing early voting is a gamble for Democrats, because under a wide-ranging voter suppression law Republicans enacted this year, only ballots that arrive at the Polk County auditor’s office by 8:00 pm on September 14 can be counted. Adding to the difficulty, campaign volunteers can no longer pick up completed absentee ballots and hand-deliver them to the county auditor.

Anyone who dawdles and mails their ballot too close to the deadline risks leaving their vote on the table. (Under previous Iowa law, any ballot mailed and postmarked before the election could be counted if it arrived by the Monday after the election.)

HOW TO VOTE EARLY IN PERSON

It’s too late to request a mailed absentee ballot in House district 37, even if you were confident the U.S. Postal Service would deliver your ballot on time. However, supporters of Phillips or Bousselot still have many opportunities to bank their votes before election day.

The Polk County Elections Office at 120 2nd Avenue in downtown Des Moines (just south of Court Avenue) will be open for early voting in person from 8:00 am to 5:00 pm every weekday through September 13, and also from 6:30 am to 2:30 pm on Saturday, September 11.

In addition, district residents can cast ballots at Ankeny First United Methodist Church (710 NE 36th St) on Friday, September 10 from 9:00 am to 3:00 pm.

I prefer voting early in person to using the mail, because you never have to worry about whether your absentee ballot will arrive on time. In addition, election workers who staff early voting sites are trained to spot common mistakes (such as forgetting to sign the affidavit envelope) in time for voters to correct them.