Why you should vote early, even if you don't want to

Today is a dark day for the United States.

We can't change the fact that Republican senators gave a brazen liar who sexually assaulted women a lifetime seat on the U.S. Supreme Court, using a sham FBI investigation restricted by White House officials as cover.

But we can diminish Republicans' power to keep harming our country and our state, starting on October 8.

Iowa Republicans are traditionally more reliable voters than Democrats, especially in non-presidential years. That was true not only in the GOP landslides of 2010 and 2014, but also in 2006 (a Democratic wave) and in 2002 (when Senator Tom Harkin and Governor Tom Vilsack won re-election by comfortable margins).

All numbers in this table come from the statewide statistical reports on the Iowa Secretary of State's website for the 2002, 2006, 2010, and 2014 general elections.

Iowa Democrats cannot perform well in November with voter participation resembling that of 2010 and 2014. The party needs to mobilize at least 60 percent of registered Democrats, ideally closer to 65 percent. Republicans may not be as energized as they were in the last two midterms, when Barack Obama was president, but we can't count on GOP turnout being as depressed as it was in 2006, when George W. Bush's approval ratings were hitting new lows.

With many polls showing President Donald Trump and key Republican policies are unpopular among independents, it's also critical to identify and mobilize no-party voters who are inclined to support Democrats. As the table shows, turnout drops off much more among independents than partisans in non-presidential years.

DEMOCRATS DEPEND MORE ON EARLY VOTING

Republicans shortened Iowa's early voting window to 29 days as part of the voter suppression law enacted in 2017. At no time during the state House or Senate debates did GOP lawmakers provide evidence of problems caused by the 40-day voting period.

The obvious motive was to blunt the expected Democratic advantage in early GOTV by giving volunteers two fewer weekends to "chase" absentee ballots.

About 41 percent of Iowans who participated in the 2014 or 2016 general elections cast early ballots. Registered Democrats and women, who usually skew toward Democratic candidates, were more likely to vote before election day. All numbers in these tables come from the relevant statewide statistical reports.

A strong absentee ballot drive is no guarantee of success: remember, 2014 and 2016 were Republican waves in Iowa. Nevertheless, early voting may have saved a few Democratic incumbents who were re-elected by narrow margins. Republicans clearly saw an electoral advantage in giving Iowans fewer days to cast ballots.

Since you're reading a website dedicated to Iowa politics, you probably never miss a general election. So why does it matter whether you vote on November 6 or a few weeks before?

Every committed Democrat who casts a ballot in October can be crossed off the list for last-minute phone calls and door knocks in November, when there are never enough hours in the day to contact everyone who needs persuading. You may be confident you'll vote on November 6, but the field organizers who draw up lists for canvassers and phone bankers don't know you. The longer you and your family members wait to vote, the more volunteer time will likely be wasted on your household.

Side benefits for voters:

• Once your country auditor has processed your ballot, you should stop receiving unsolicited phone calls and knocks at the door.

• You won't have to worry about bad weather, unexpected work obligations, a severe illness or injury, or some other family emergency stopping you from getting to the polls on election day.

• You won't have to deal with delays on November 6.

Two changes to Iowa election law will likely increase wait times at polling places. First, all voters will be asked to either show ID or sign an oath attesting to their identity. Second, straight-ticket voting will no longer be an option, forcing many people to spend longer than usual marking their ballots. In the last midterm election, more than a third of Iowans who voted filled in the Democratic or Republican ovals.

Many politically engaged people are attached to the ritual of voting on election day. You may enjoy bringing children with you to the polling place, or going out for breakfast with your partner afterwards. Mailing an absentee ballot isn't the same experience.

I have good news: you can continue all of your favorite traditions while voting early in person.

Starting on October 8 and running through November 5, all 99 Iowa county auditors' offices will allow early voting during regular business hours. I prefer this method and usually vote on the first day some other errand brings me to downtown Des Moines. Voting at the Polk County Elections Office (on Second Avenue just south of Court) has never taken me more than ten minutes.

At a county auditor's office, early voters sign a ballot request form, then receive a ballot immediately. You will not be allowed to take the ballot home to fill out later, so make sure to research candidates for all races before going to vote. Sample ballots are available on county auditor websites, so voters can find out the options ahead of time.

County auditor's offices have accessible ballot marking devices for those who need help to fill out their ballots.

Voting early in person increases the chance your vote will count, because as you hand your ballot over, an elections official will confirm that you sealed the secrecy envelope and signed the affidavit envelope.

This method also conserves volunteer resources. Contacting voters who have not returned their absentee ballots is labor-intensive, and many people are hard to reach by phone or at the door.

If you need transportation to your county auditor's office, a ride can probably be arranged by calling your local Democratic candidate, county party, or field office.

Satellite voting may also be available near you on certain days over the next month. (Not every county offers his option.) The process is the same as for early voting at the auditor's office: you sign an absentee ballot request form, receive a ballot, and must fill it out and turn it in immediately. You can't take the ballot home, so research any down-ballot races ahead of time.

Common locations for satellite voting include public libraries, community centers, or churches. They are required to be accessible to people with disabilities. The schedule will be available on your county auditor's website. Here is this year's list of satellite voting dates and locations in Polk County. 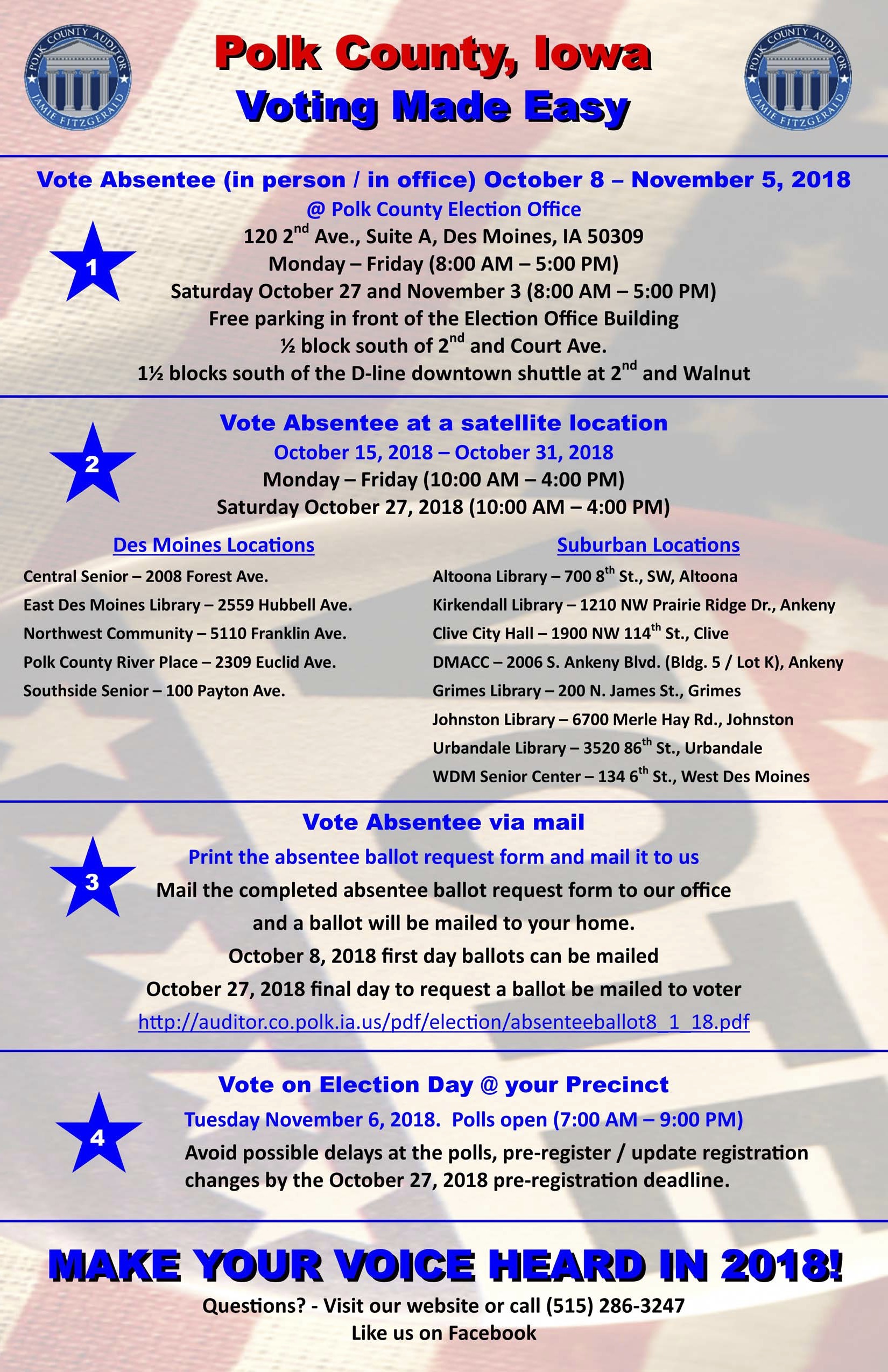 HOW TO VOTE BY MAIL

For Iowans who prefer to vote early by mail, county auditors will process all absentee ballot requests received by 5 pm on Saturday, October 27. Forms are available on the Iowa Secretary of State’s website and on every county auditor's website, if you haven't already received one from a campaign or a canvasser.

You should receive your ballot within a week of sending in the form. Auditors will begin mailing absentee ballots on October 8 to most voters who already requested them. Those serving in the military or living overseas may already have received their ballots.

If you make a mistake while filling in your absentee ballot, you can send it back to the county auditor, writing "spoiled ballot" on the return envelope, and request a replacement ballot.

After mailing your absentee ballot, you can use this tracking feature on the secretary of state's website to confirm it arrived at the county auditor's office.

Mailed absentee ballots must be postmarked by Monday, November 5. I encourage voters not to procrastinate, because post offices no longer routinely postmark all mail. If your ballot arrives at the county auditor's office after election day with no postmark proving you mailed it by November 6, your vote will not be counted. Hundreds of ballots have gone uncounted in past Iowa elections for that reason.

Some people request a ballot by mail and either forget to send it back or decide later they would prefer to vote on election day. The Secretary of State’s website notes,

WILL MY VOTE BE COUNTED?

Unfortunately, a colossal screw-up in Dallas County left thousands of 2016 general election ballots uncounted. The Secretary of State's office should have more safeguards in place this year to catch any major errors at the county level.

Unlike some states, Iowa does not allow counting of absentee ballots submitted by voters who died before election day. County auditors will pull those ballots if notified of the voter's death in time.

Any relevant comments are welcome in this thread. No matter how upset you are about the travesty that just played out in the U.S. Senate, Ari Berman is right: "Voting is the best revenge." The sooner you bank your ballot, the better.

UPDATE: John Deeth notes that in some counties voters can cast an early ballot in person at any site, regardless of the precinct they live in. In contrast, if you show up at the wrong precinct on election day and insist on casting a provisional ballot, your vote will not be counted. You need to go to the correct polling place on November 6 in order to cast a valid ballot.