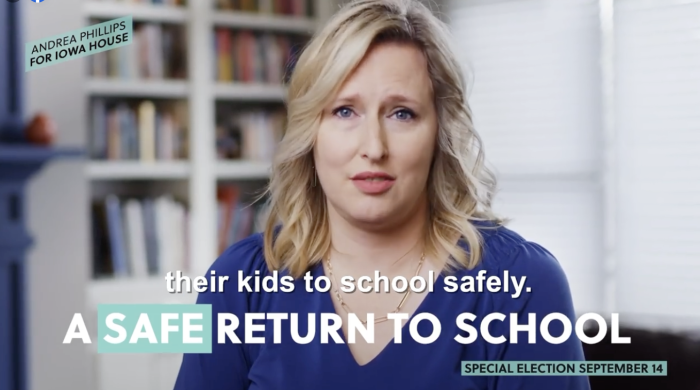 Early voting has begun in Iowa House district 37, where voters in parts of Ankeny and northern Polk County will choose a new state representative on September 14. Bleeding Heartland previously covered the recent voting history of this suburban area, as well as background on Democrat Andrea Phillips and Republican Mike Bousselot.

Both candidates and many of their supporters (including other Iowa House Democrats and U.S. Senate candidate Abby Finkenauer) have been knocking doors in the district. Direct personal contact has long been considered one of the most effective ways to drive turnout in a state legislative race.

Phillips and Bousselot are also advertising in the Des Moines market on broadcast and cable television. Both introductory ads tap into voters' feelings about the COVID-19 pandemic and mitigation policies.

Phillips' commercial went up a few days before K-12 school districts reopened. The spot alternates between the candidate speaking to viewers and a voice-over describing Phillips as "a mom of kids in Ankeny schools."

Andrea Phillips' voice: We all want the same thing: a chance for our kids to be kids. [viewer sees footage of children near a school, then Phillips speaking to the camera; words on screen: "Andrea Phillips, Ankeny mom"]

Male voice-over: Andrea Phillips. A mom of kids in Ankeny schools. Andrea's running to bring balance back to the Iowa House. [viewer seeks Phillips speaking to another parent during school pick-up, and a child approaching the candidate]

Phillips' voice: I understand the frustration when the system isn't working. [viewer sees Phillips walking and talking with another mom; words on screen "BALANCED LEADERSHIP"]

Phillips speaks to the camera: Ankeny parents want to be able to send their kids to school safely. [words on screen "A SAFE RETURN TO SCHOOL"]

And they want that decision to be left in the hands of the school. [footage of children walking, news clip with Cedar Rapids Gazette headline "GOV. KIM REYNOLDS REJECTS $95M IN FEDERAL AID FOR SCHOOL COVID-19 TESTING," words near bottom of screen "LOCAL DECISIONS FOR LOCAL SCHOOLS"]

And that means working together. [spot closes with a reminder of the candidate's name and special election date] 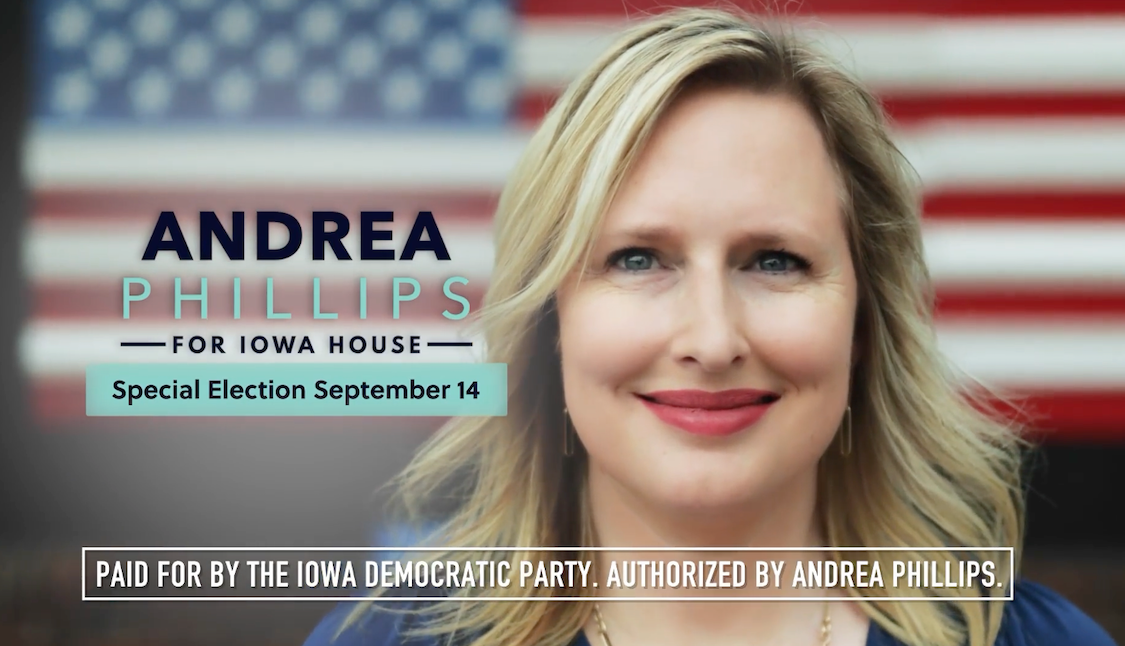 This theme will resonate with many families who are frustrated by the absence of any meaningful COVID-19 safety protocols in schools this year.

Referring to "balance" at the statehouse is designed to appeal to suburban moderates who may not identify as Democrats but feel the GOP trifecta has pursued an extreme agenda.

This spot began running about four weeks before the special election. I'll be watching to see whether the Democrat continues to air this commercial or follows up with a different "closing argument" for voters.

"TRUST IOWANS TO MAKE CHOICES FOR THEMSELVES"

Whereas Phillips has run for the Iowa House before, Bousselot's a first-time candidate. So I found it odd that his introductory television ad relied entirely on a voice-over, rather than having the candidate speak directly to viewers.

Male voice-over: We need leaders who listen and who trust Iowans to make choices for themselves. [camera pans over photos of families with children, moves to picture of the candidate]

Mike Bousselot believes in Iowans making choices that work for them, at their own kitchen tables--not having choices handed down to them by government bureaucrats. [camera pans over more photos of families with kids, plus an image of Bousselot with his wife, words on screen "Republican Mike Bousselot Choices that Work for Iowans"] This commercial is too impersonal for my liking. But it does drive home the message that Bousselot is a Republican, a plus for him in this GOP-leaning area. And it will resonate with those who loathe masks and most other mitigation practices used last year. A lot of people with that mindset live in Ankeny, starting with the QAnon, anti-vaccine and anti-mask moms who watched Governor Kim Reynolds sign the law banning local mask mandates.

So as a matter of political strategy, the ad could be successful.

The substance of Bousselot's commercial is a sick joke. He's for "safer communities" while undermining efforts to combat a novel virus that has killed nearly 1 in 500 Iowans who were alive at the beginning of 2020. COVID-19 was Iowa's third leading cause of death in 2020, and is on track to kill around 2,000 more Iowans this year.

In case there were any doubt about his priorities, Bousselot promised in the Facebook post introducing this commercial, "I'll always fight for safer communities, lower taxes, and most importantly, your freedom to make decisions for your own family."

Blank Children's Hospital in Des Moines suspended elective surgeries in early August. Other Polk County hospitals reimposed visitor restrictions this past week, because sharply rising hospitalizations are straining their resources. We need all hands on deck to get community transmission of COVID-19 under control, to avoid the near-collapse of hospital systems happening across the American South.

But Bousselot wants Ankeny voters to know that the most important thing to him is making sure no one ever has to make even a minimal gesture (like wearing a mask in indoor public spaces) to prevent other people from developing a potentially deadly illness. It's a sad commentary on what passes for Republican "family values" these days.

Winning a special election often depends less on persuasion than on mobilizing voters who share your values. Will the COVID deniers join enough old-fashioned anti-tax Republicans to put Bousselot over the top? Or will Phillips tap into the frustration of those who want local leadership and school practices that follow CDC guidance?

We'll find out in a little more than two weeks.

UPDATE: After I published this post, several readers reached out to ask about the baby the candidate’s wife is shown holding. Bousselot’s bio says he “lives in Ankeny with his wife Holly” but does not mention any children. Sources who know the family told me to their knowledge, Bousselot and his wife do not have a baby. The candidate didn’t respond to my emails or Facebook messages, so I wasn’t able to ascertain whose baby is pictured—or get answers to any of my other questions. The ad is clearly designed to imply the Bousselots are parents of a young child, as are many Ankeny residents.