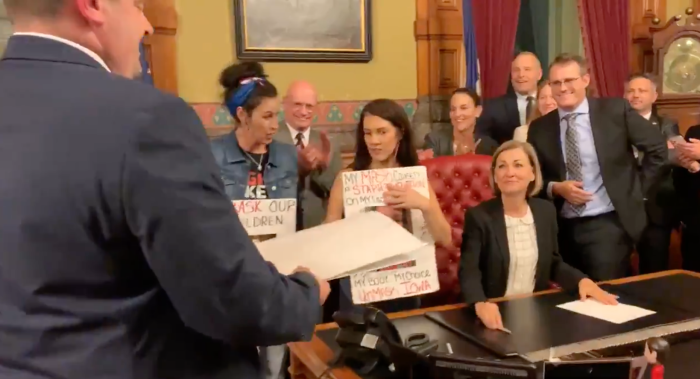 Governor Kim Reynolds has 30 days to consider any bills sent to her during the final days of a legislative session, but she could hardly wait 30 seconds to sign one of the bills approved hours before the Iowa House and Senate adjourned for the year.

The governor’s office announced at 12:36 am that Reynolds had signed House File 847, an education bill amended on May 19 to prohibit school districts and local governments from following best practices for slowing the spread of COVID-19.

Reynolds was in a hurry because the last amendment added to the bill prohibits public or private schools from requiring “employees, students, or members of the public to wear a facial covering for any purpose while on the school district’s or accredited non public school’s property” unless there is some extracurricular or instructional purpose (such as eye or ear protection required for certain activities).

Cities and counties are also banned from requiring business owners “to implement a policy relating to the use of facial coverings that is more stringent than the policy imposed by the state.”

From the late-night news release:

“The state of Iowa is putting parents back in control of their child’s education and taking greater steps to protect the rights of all Iowans to make their own health care decisions,” said Gov. Reynolds. “I am proud to be a governor of a state that values personal responsibility and individual liberties. I want to thank the Iowa Legislature for their quick work in bringing this bill to my desk so that it can be signed into law.”

Speaking to reporters earlier in the day, Reynolds had pretended to have an open mind about this proposal. Radio Iowa’s O.Kay Henderson quoted her as saying, “we’ll see where it ends up” and “it’s something that I’m willing to take a look at & probably would be in favor of.”

That was disingenuous. State Representative Steve Holt, who has opposed most COVID-19 mitigation policies since the early weeks of the pandemic, posted on Facebook on May 19 that Republicans were poised to approve this amendment, adding, “Instead of a July 1 implementation date as is normal practice, the Governor requested immediate implementation upon her signature.”

The U.S. Centers for Disease Control still recommends universal use of masks in schools, because no elementary school or middle school students are fully vaccinated, and only a small fraction of high school students have had a COVID-19 vaccine. The B.1.1.7 variant of COVID-19, which is more transmissible among children, has been identified in all 99 Iowa counties. And while current vaccines appear to be effective in preventing severe illness following exposure to that variant, other variants may emerge that resist vaccines.

The Iowa Department of Public Health encouraged schools last week to drop their mask mandates. But many districts opted to stick with their policies for the remainder of the academic year, as the CDC advised.

Reynolds made sure even the largest Iowa school districts, where classrooms may be crowded, can’t ask students and staff to cover their faces for another week or two.

Democratic State Representative Christina Bohannan had offered an amendment limiting the prohibition of mask mandates to COVID-19, so that local governments could address future public health threats. State Representative Dustin Hite, who proposed the ban on mask mandates, said that in any future health emergency, the governor would be able to impose policies to limit spread of the disease. Republicans rejected Bohannan’s proposal along party lines.

They also voted down an amendment from Democratic State Representative Wes Breckenridge, which would have allowed schools or local governments to require face coverings if ordered by the Iowa Department of Public Health or a local board of health “based on local public health conditions.”

Reynolds speculated recently that “mixed messaging” from public officials might contribute to Americans’ reluctance to get vaccinated for COVID-19. Nothing screams “the pandemic is over” like telling Iowans that they and their children can throw away their masks forever, regardless of their vaccination status.