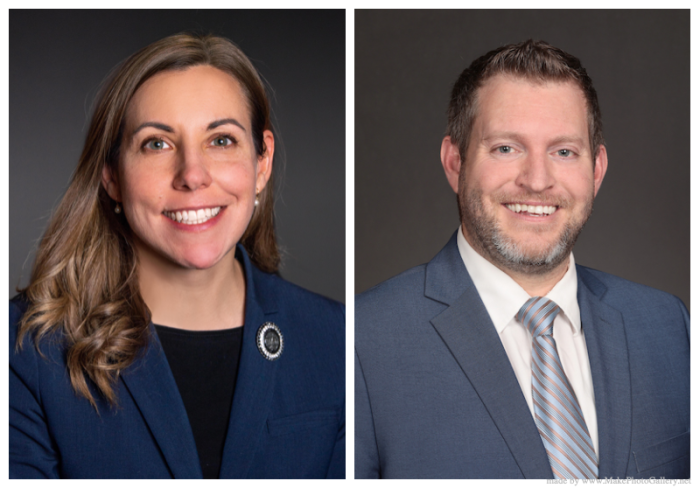 Democratic State Senator Sarah Trone Garriott confirmed on December 1 that she will move to Dallas County and seek re-election in the new Iowa Senate district 14. Her decision sets up a potential 2022 race against Iowa Senate President Jake Chapman, the second-ranking Republican.

Chapman has not confirmed his plans. But in a December 2 Facebook post, he hinted that he will stay in the suburban swing district where he now lives. (I expected him to move to a nearby district that is safe for the GOP, as Senate Majority Leader Jack Whitver is doing.)

A race between Chapman and Trone Garriott would likely be one of next year’s most expensive Iowa legislative campaigns, and would be closely watched for signs of political change in the suburbs.

POLITICAL LANDSCAPE OF A SWING DISTRICT 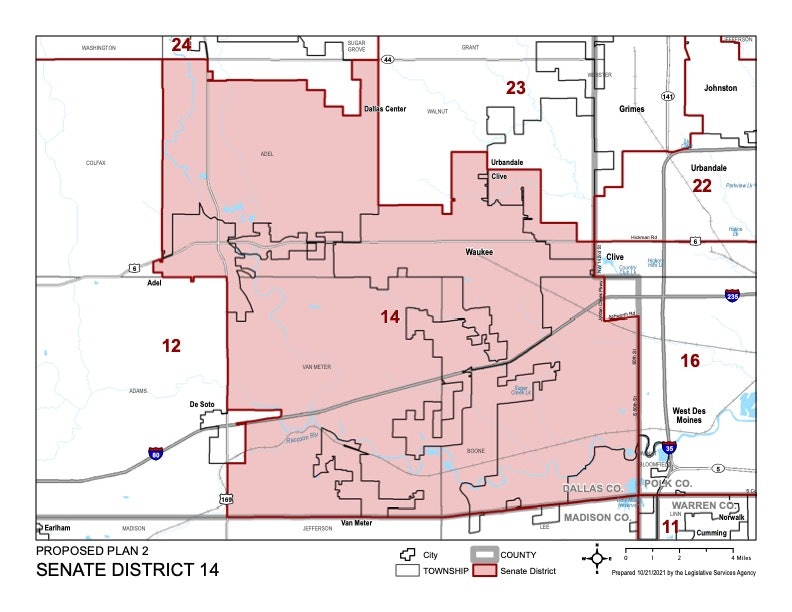 According to Iowa Senate Democrats, about 80 percent of the new district’s residents live in suburban areas now represented by Trone Garriot (Waukee and the Dallas County portions of West Des Moines and Clive). Chapman currently represents the other 20 percent, who live in rural areas or in the small towns of Adel and Van Meter.

On the other hand, Senator Joni Ernst outpolled her Democratic challenger Theresa Greenfield in the 2020 Senate race by 50.4 percent to 47.1 percent. Similarly, Governor Kim Reynolds gained 50.2 percent of the vote here in 2018, to 48.2 percent for Fred Hubbell.

The Des Moines Register’s Ian Richardson cited an Iowa Senate Democratic analysis showing Biden received 50.8 percent of the vote in the new Senate district 14 precincts, up from 45.6 percent for Hillary Clinton in 2016. Those numbers appear to be based on the two-party vote share rather than the raw percentages for each presidential candidate.

My read is that this area leans slightly to the GOP and voted for Biden thanks to “never Trump” Republicans. More thoughts on that phenomenon in a moment.

CHAPMAN HINTS HE WILL STAY TO DEFEND SEAT

As Bleeding Heartland discussed last month, Trone Garriott’s current home is part of the new Senate district 16, where fellow Democratic State Senator Claire Celsi is seeking re-election in 2022. But Trone Garriott can claim incumbency if she moves to any part of the district where she was elected in 2020.

Since Trone Garriott was elected to a four-year term in 2020, she could hold over in the new Senate district 14, if she were the only incumbent living there. (For more details on the rules regarding Iowa Senate elections following redistricting, read this fact sheet prepared by Legislative Services Agency staff.)

By the same token, Chapman could claim incumbency if he moves to any portion of the district where he was re-elected in 2020. That scenario seemed plausible to me, since he wouldn’t need to move far to end up in a solid red area like the new Senate district 24 or Senate district 12.

But if Chapman stays put, he and Trone Garriott would face off in 2022. The winner would serve the remainder of that term and would need to seek re-election to a full term in 2024, when all even-numbered Iowa Senate districts will be on the ballot.

The day after Trone Garriott confirmed her plans, Chapman posted on Facebook, “Here’s a reality check on my new senate district. Big announcement coming soon! Rest assured, there is zero chance one of the most liberal senators in Iowa will get a free pass in 2022!” 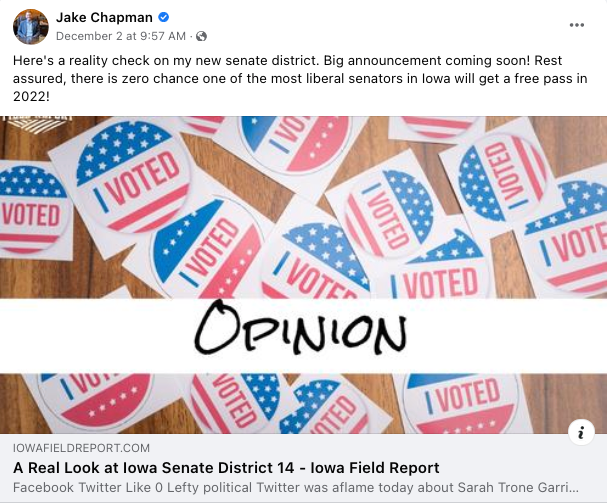 Last month, Chapman didn’t respond to my inquiries about his political future. But minutes after putting up that Facebook post, he emailed a photo of it in reply to one of my messages.

Since Chapman is the only Republican who could prevent Trone Garriott from holding over until 2024, it’s easy to guess what the “big announcement” will be.

Senate district 14 should be a top-targeted race for both parties.

Chapman’s Facebook post linked to a poorly-reasoned analysis by Luke Martz of the Iowa Field Report website, which is bankrolled by Republican campaigns and committees. Martz compared apples to oranges by looking at the total number of precincts Trone Garriott and Chapman carried in 2020, and the total number of votes for major-party candidates in their two races combined.

Martz argued that Trone Garriott underperformed because she won the old Senate district 22 by just 0.4 percent, while Biden carried the same precincts by 11.2 percent. (The Daily Kos Elections spreadsheet lists the presidential vote in that district as 55.1 percent for Biden, 43.1 percent for Trump.)

Keep in mind that the suburbs were ground zero for “never Trump” Republicans, who preferred Biden for president but voted straight GOP down ticket. Furthermore, Trone Garriott was a first-time candidate running against Scott Cirksena, who served two terms on the Clive City Council before being elected mayor three times. He knocked doors last summer and fall, while Trone Garriott (like most Democratic legislative candidates in 2020) didn’t canvass during the COVID-19 pandemic.

Cirksena ran an old-fashioned Republican campaign, with messaging focused on the economy, strengthening public schools, and improving mental health. He didn’t talk about social issues. In other words, he was a good fit for a suburban district.

Chapman is a different kind of politician. A longtime advocate for the most extreme abortion bans, he recently made headlines for threatening to prosecute teachers and librarians who disseminate supposedly “obscene” material. Changing state law to establish criminal penalties for educators will be one of his top priorities during the 2022 legislative session.

That doesn’t mean he couldn’t win re-election next year. Republicans will spend heavily to defend a leader of their caucus. And Iowa Field Report previews the case they’ll make against Trone Garriott: too liberal, opposes tax cuts, supports “open borders,” and so on. The midterms may be very tough for Iowa Democrats, especially if Biden’s approval ratings don’t improve.

But assuming Chapman stays in Senate district 14, he’s making a big gamble. If he beats Trone Garriott, he’ll have to seek re-election again in 2024. This booming area (the fastest-growing part of Iowa, containing many young people) may not be as friendly to a conservative Republican lawmaker in a presidential year. There’s no guarantee suburban voters will continue to trend toward Democrats, as they did during Trump’s presidency. But if they do, Chapman may find himself in real trouble.

It’s notable that Jack Whitver, the top Iowa Senate Republican, is moving out of his Ankeny-based district, even though he’s less of a lightning rod than Chapman.

Trone Garriott didn’t waste any time getting to know voters in the less familiar parts of her new district. Fully vaccinated for COVID-19, she was out this weekend knocking doors in Adel. She’ll have no trouble recruiting volunteers, as the Dallas County Democrats are well-organized. Activists from safe blue districts in Polk County may also be motivated to GOTV against Chapman, who is deeply disliked in Democratic circles.

Bleeding Heartland will keep a close eye on this race.

Trone Garriott will relocate within her current Senate district, continue to serve her community

“The people of this district deserve a Senator who shows up, listens, and brings people together for the greater good,” said Senator Sarah Trone Garriott. “As I’ve spent time with my neighbors, they have shared with me that our public schools are the heart of the community. I feel that deeply, too. I am committed to working with parents, children, and educators to make Iowa’s schools the strongest in the nation.”

“I am announcing my re-election to Senate District 14 to continue to prioritize the issues that make life better for Iowans: good schools, clean water, quality accessible healthcare, economic opportunity, and civil rights,” added Trone Garriott. “I am honored to continue working hard for the people of Waukee, West Des Moines, and Clive, and excited to serve the people of Adel, Van Meter, and Dallas County.”

“Sarah has the unique ability to listen intently and see both sides of an issue,” said State Representative Kenan Judge. “She has a big heart and tirelessly advocates for the people in her community. She exhibits a servant’s heart in her daily life and work.”

Senator Trone Garriott has always felt called to serve. Sarah is an ordained Lutheran Minister and preaches at churches throughout central Iowa. She joined AmeriCorps right out of college to help victims of domestic violence. She served as a hospital chaplain, caring for people during times of crisis. Over the course of her life, her call to service has taken many forms, including most recently as State Senator and as the Coordinator of Interfaith Engagement at the Des Moines Area Religious Council Food Pantry Network.

“I believe hard work deserves fair pay, but our economy isn’t working for hardworking Iowans right now,” said Trone Garriott. “I know what it is like to be caught between childcare payments, student loans, and a mortgage. Folks are being squeezed by higher prices. Parents have seen their kids’ schools get turned into political battlefields. Not only can I relate to the economic and social pressures that our families are facing, but I’m ready to get to work on solutions that will make our communities strong.”

“I could not be any more excited that Sarah has chosen to run for election in Senate district 14,” said Jamie Secory, Waukee School Board Member. “Sarah is everything anyone could ask for in a Senator – smart, thoughtful, compassionate, articulate, and dedicated. I encourage everyone to follow her work this past year to see for yourself why there could be no better choice than Sarah Trone Garriott for State Senate.”

Senator Sarah Trone Garriott and her husband, Will, have two boys in elementary school. For more information about Sarah, please visit: https://www.sarahforiowa.com. Election Day is Tuesday, November 8, 2022. A map of Senate district 14 is attached.