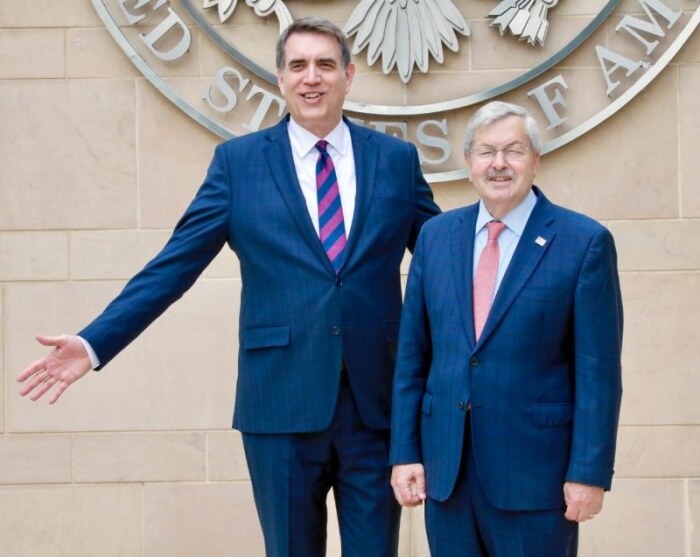 Former U.S. Ambassador Terry Branstad and his former chief of staff in Beijing, Steve Churchill, recently formed a consulting group to provide "strategic insight and solutions to corporate leaders and investors conducting business in China and the United States."

Countless former diplomats who served presidents of both parties have traveled the same path after leaving government service. Thanks to former President Donald Trump, Branstad was able to start cashing in a year early.

LOBBYING BY ANOTHER NAME

Branstad and Churchill announced the new firm in a December 16 news release, enclosed in full below. (I learned about the venture from an article by the Des Moines Register's Stephen Gruber-Miller.)

"Drawing on the expertise of two of the highest-ranking individuals to serve at the U.S. Mission in China," the release states, "the Branstad Churchill Group is a strategic partner in helping organizations and individuals advance their goals." Some of that work sounds like business consulting: risk assessment, analysis of market penetration and tariff barriers, trade and investment opportunities.

Other services sound a lot like lobbying: "Government and Regulatory Analysis," "Stakeholder Mapping and Engagement," "Federal Government Advocacy Strategies," "Government Relations at the State and Local Level." The Branstad Churchill website doesn't describe any of the planned work as lobbying, though.

That's standard practice in the strategic consulting world. Bob Silverman, a former career diplomat and president of the American Foreign Service Association, argued in this February 2021 piece for The National Interest that "the Unregulated Influence of Strategic Advisory Firms Is Destroying Washington":

Using the Branstad Churchill group's "contact" page for inquiries, I reached out on December 22 and 23 with a number of questions, such as:

-Do you intend to disclose your clients and information about your lobbying on their behalf?

-If not, who will be responsible for ensuring that you do not exceed the 20 percent threshold for lobbying activities that would trigger those disclosure requirements?

-Can you confirm whether you intend to register under the Foreign Agents Registration Act to disclose your work for foreign clients?

-Will Eric Branstad or anyone else in Ambassador Branstad's family be an employee or contractor with the Branstad Churchill Group? (The former ambassador's son worked in the Commerce Department during the Trump administration and later joined the Mercury Public Affairs lobbying group while the elder Branstad was still in China.)

No one responded to my inquiries. I will try again in the new year.

Branstad and Churchill both left government service in October 2020, so they are past the one-year "cooling off" period federal law requires for certain kinds of work. Churchill's LinkedIn page lists him as a "founding partner and strategic consultant" with Branstad Churchill beginning in July 2021. In my messages last week, I sought to clarify whether either partner engaged in work such as soliciting clients (in the U.S. or China) or helping them navigate situations (in either country) prior to October 2021. There was no reply.

Under an executive order Trump issued in 2017, the former ambassador and chief of staff would have been restricted from certain communications with State Department officials for two years, and would have been prohibited for five years from engaging in "lobbying activities" with respect to that agency. (The definition of "lobbying activities" is more expansive than that of "lobbying contacts" under federal law.)

Fortunately for the new business partners, Trump rescinded that executive order on his last night in the White House, freeing all who had served in his administration from following the ethics pledge they had signed.

Perhaps it would not have mattered; ProPublica's Derek Kravitz reported in 2019 on dozens of former Trump administration officials who were not abiding by the lobbying restrictions, which were still in effect.

A BIPARTISAN PROBLEM IN WASHINGTON

The "revolving door" between government service and lobbying is nothing new, of course. Nor is structuring "consulting" work to avoid the requirements of the Lobbying Disclosure Act of 1995.

In a May 2021 commentary on President Joe Biden's foreign policy team, Silverman observed, "Biden team members generally avoid mention of their ties to strategic advisory firms. The mainstream U.S. media also tends to overlook these ties." The practice involves many potential undisclosed conflicts of interest, Silverman noted. He listed the following senior officials in the current administration who recently worked in consulting, with the name of the relevant firm in parentheses.

Earlier this month, the Senate confirmed Burns as U.S. ambassador to China by 75 votes to 18. Iowa's Senator Chuck Grassley voted to confirm, while Senator Joni Ernst missed the vote.

Given his age (75 years old), Branstad is unlikely to re-enter government in any future administration. But Churchill could be well-positioned to pass through the revolving door in the other direction during the next Republican presidency.

Final note: Just a few months ago, the Republican Party of Iowa spent heavily on ads lying about Andrea Phillips' past work on the board of the American Chamber of Commerce in Shanghai. I haven't heard anyone in the Iowa GOP complain about Branstad offering to assist Chinese companies, or profiting from connections he formed through U.S. government service. As the old saying goes, "IOKIYAR" (It's OK if you're a Republican). 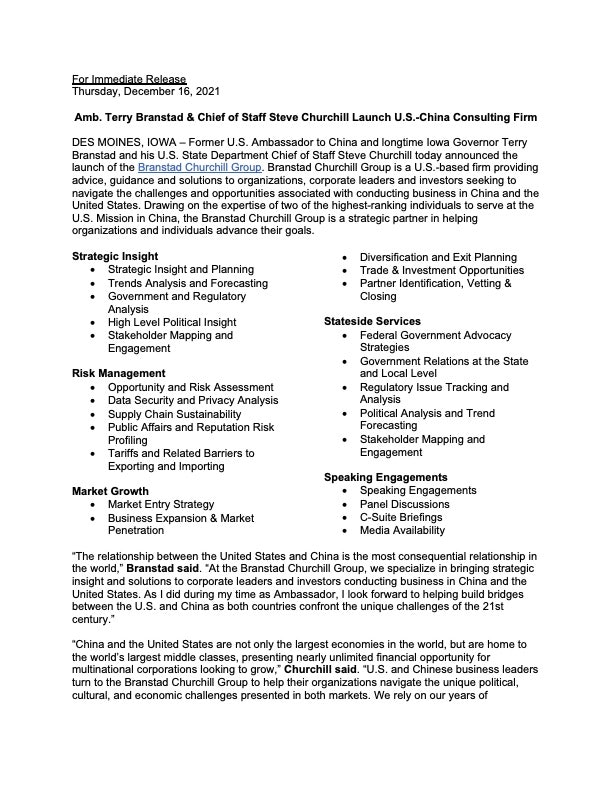 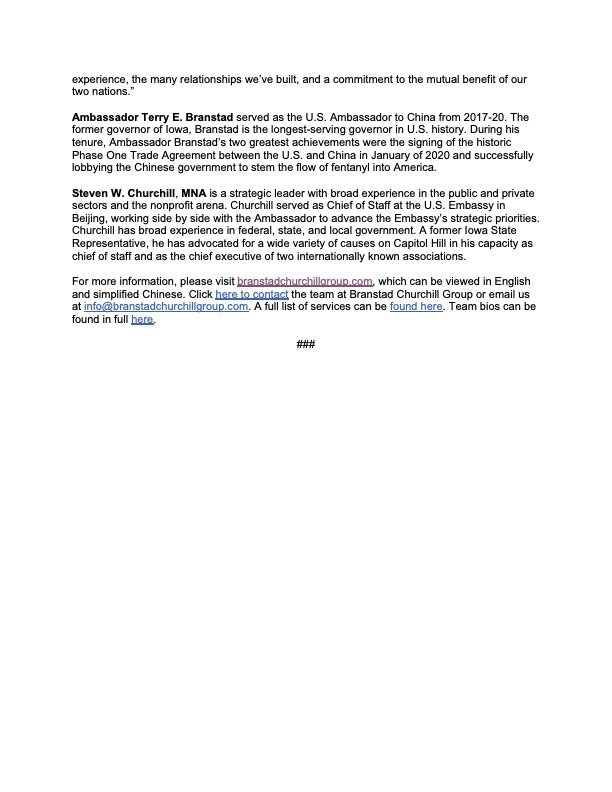