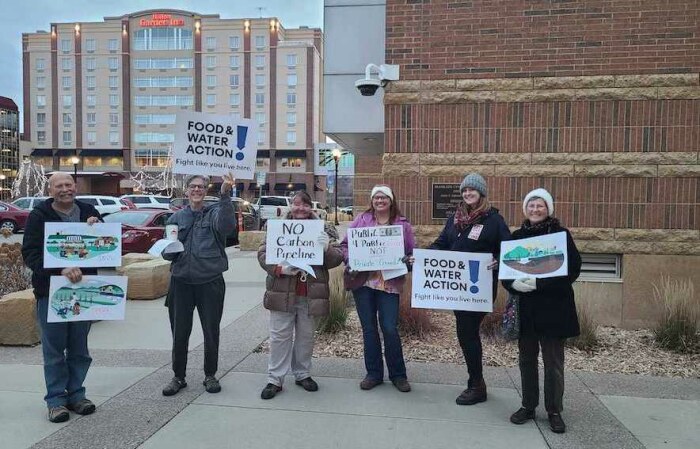 Virtually unknown two months ago, proposed hazardous liquid carbon pipelines are the latest environmental disaster to hit Iowa’s newspaper headlines. Threatening everything from peoples’ lives to their land and our climate, it’s no surprise these pipelines have garnered mass opposition from the get-go, uniting Iowans of all stripes.

On behalf of the 73,000 Iowans we represent, with members in every county, we oppose carbon capture pipelines. Carbon pipelines are a danger to Iowans and our land, a false climate solution, and a distraction from the real work of reforming our agricultural and energy sectors to combat the looming climate emergency. They are an affront to our shared vision for Iowa’s future — where communities work together to protect our water, land and climate for future generations and those who live downstream.

Nonetheless, Bruce Rastetter’s Summit Pipeline Services is pursuing a plan to build the world’s largest carbon pipeline across 2,000 miles of land in the Midwest, crossing 30 Iowa counties — and they’re calling it “green”. Following close behind, Navigator CO2 is proposing another carbon pipeline that would cover 36 counties.

The madness doesn’t end there; state geologists recently made a case for Iowa being a prime location for a massive underground storage site for some of this CO2. They are apparently willing to push for this dangerous scheme in order to secure some of the federal funding available for this nonsense.

Carbon pipelines are a potentially lethal threat to public safety. Leaks are commonplace in fossil fuel pipelines, and we can expect leaks in carbon pipelines as well. Leaked carbon dioxide is an invisible asphyxiant. Exposure can lead to anything from unconsciousness to comas.

In Mississippi, a carbon pipeline rupture gassed an entire town, sending 49 people to the hospital and leaving many with long-term health impacts. Summit’s proposed pipeline would be more than twice as long as the one that ruptured in Mississippi, putting thousands of Iowans at risk. In addition to the threats to health and safety, any potential rupture would stress rural community health systems and emergency response services.

These hazardous carbon pipelines will mire landowners in legal battles over their private property, and diminish farmland fertility. Just as with the controversial Dakota Access Pipeline, eminent domain seizures are already a looming threat when it comes to carbon pipelines. Iowa landowners lost the legal right to control their land in a 2019 state Supreme Court ruling that upheld the state’s use of eminent domain for Dakota Access. The same could happen here.

These proposed carbon pipelines would snake through rural communities across the state, covering twice as many counties as Dakota Access. Through soil compaction and topsoil displacement inherent in the pipeline construction process, farmers impacted by the pipelines stand to sustain significant crop yield loss.

Most critically, carbon pipelines take us backwards on tackling climate change — they are a false climate solution. Carbon capture extends a lifeline to the fossil fuel industry; in fact, the only currently workable carbon capture technology is a technique known as ‘enhanced oil recovery,’ where the carbon dioxide is used to extract more oil from existing wells.

Carbon capture also extends the life of the dying ethanol industry, which has a detrimental impact on our environment. The heavy water usage, intensive row-cropping, and heavy fertilizer use associated with ethanol production cannot be alleviated by carbon capture.

Lastly, carbon pipelines divert public taxpayer money and political attention away from climate action that works. At the expense of further wind and solar investment, Congress has agreed to send public taxpayer dollars to carbon capture instead. Our politicians are throwing money at untested false solutions.

Real climate solutions necessitate systemic change, starting at the root causes of pollution and reforming our energy and agriculture systems from the ground up. We need to double down on wind and solar, and revitalize our agriculture system so that it works for rural Iowans, small farmers and our environment. In Iowa, that means no carbon pipelines.

Iowans are united for a healthy and livable state for future generations. We will not risk our lives, land, and climate for carbon pipelines and their corporate cronies. Driven by nothing more than profit and investor greed, carbon capture pipelines are unwelcome in Iowa. We demand that Governor Kim Reynolds shut down this pipeline proposal and cease state support for the project, before this nightmare is added to her disastrous climate legacy.

Top photo by Emma Schmit taken on December 2, 2021 and published with permission.