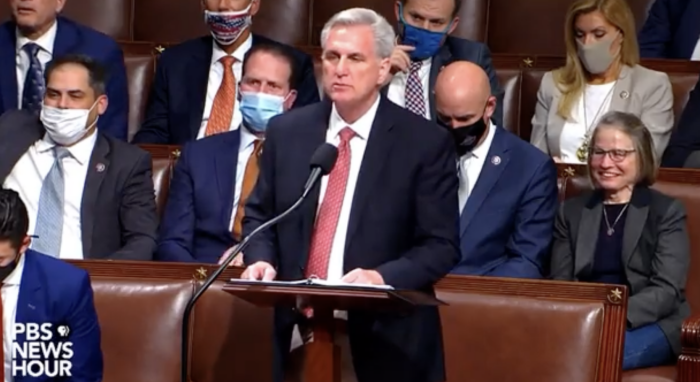 U.S. Representative Mariannette Miller-Meeks has been fined again for not wearing a mask in the U.S. House chamber. A January 10 news release from the House Ethics Committee announced that Miller-Meeks did not appeal the fine within the allowed time period.

That statement did not confirm when the first-term Republican from Iowa's second district broke the chamber's rules on face coverings. The Office of the Sergeant at Arms notified the committee of the fine on November 30.

During part of House Minority Leader Kevin McCarthy's eight-hour speech on November 18, intended to delay action on a Democratic spending bill, Miller-Meeks can be seen on camera, nodding and laughing with her face uncovered. She's near the right side of the frame in this clip from a PBS News Hour video.

McCarthy: Can I be speaker? pic.twitter.com/QifyqkBpTQ

It's the second mask violation for Miller-Meeks, who was fined $500 last May after going maskless in the chamber to deliver a speech urging the House to "return to normal." Under House rules, second and subsequent violations of the mask mandate are subject to fines of $2,500.

Miller-Meeks did not appeal the earlier disciplinary action either. In media interviews and fundraising materials at the time, she said she was "following the science" and U.S. Centers for Disease Control guidance, stating that fully vaccinated individuals can go without masks in indoor settings.

Since late July 2021, the CDC has recommended that even fully vaccinated people wear face coverings indoors in communities where COVID-19 transmission is high.

Staff for Miller-Meeks did not immediately respond to Bleeding Heartland's request for comment on the recent fine. I will update this post as needed.