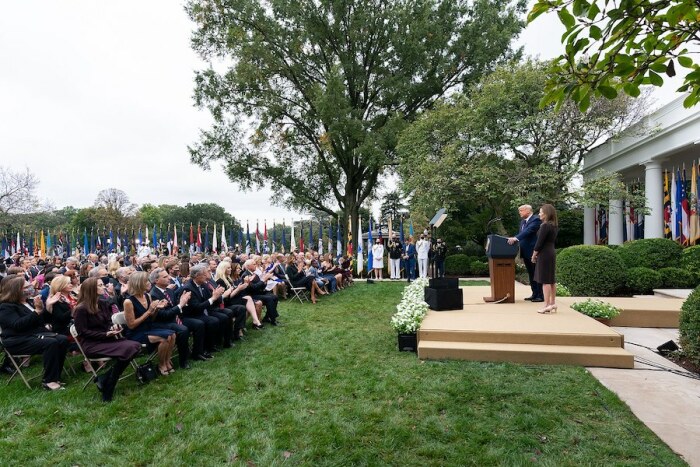 It all could have been different

Bruce Lear: What if, instead of shunning masks early in the pandemic, Donald Trump had marketed them like his resorts and his casinos?

Continually second-guessing ourselves is about as comfortable as being a loud liberal at a Sioux Center Chamber of Commerce meeting. But indulge me as I ponder the road not taken by Donald Trump, since he never apologizes or admits to having regrets.

The “What ifs” of those who led the country during a once-in-a-century public health crisis could make us all sick.

What if, instead of shunning masks early in the pandemic, Trump had marketed them like his resorts and his casinos? The opposition may have screamed for a while, but we all would have been protected with high quality MAGA masks sent to every home at government expense.

He would have owned COVID-19 like Republicans want to own liberals now. A lot would be different.

For example, there would never have been a shortage of protective gear for hospitals and nursing homes, because the Trump brand would have been all over it.

His followers would have had to make a hard political choice between wearing a mask and forsaking their leader. Democrats trust science, so they would have rolled their eyes, swallowed hard, and temporarily put on the MAGA mask or until they could find an alternative.

During the coming out party in the Rose Garden for Amy Coney Barrett, Trump's last Supreme Court nominee, the president and his acolytes wouldn’t have caught COVID-19 because they would have been wearing MAGA masks. Perhaps it would have looked sickening to some, but no one would have gotten sick from a contagious virus.

What if, when legitimate vaccines became available, instead of peddling quack remedies, Trump had embraced vaccines and called them the “Trump Triumph?” It would have sent the message they were safe and the patriotic thing to do.

We’d have a vaccination rate now of about 98 percent. Our hospitals wouldn’t be overrun, and every school would be open.  Democrats would have agreed (since they trust science), so the vaccination drive would have been bipartisan.

What if Trump had used the power of the presidency to require every American to receive “The Trump Triumph vaccines”? Governors like our own Kim Reynolds wouldn’t have resisted the mandate, because their beloved leader imposed it. It would have been embraced by business because it got us all back to work.

Democratic governors might have chafed at the mandate, but the chafing would have caused only a minor political rash. They wouldn’t have tried to overturn it in court because the science underlying the policy was sound.

If the U.S. had had near-universal masking and early vaccine mandates, Delta might still represent the name of an airline, or a land formation. Omicron might be a real cool first name for a sorority.

We can’t change the regrets of history. But what if we learn from our mistakes so we don’t repeat them? We’d all sleep better and not be burdened by America’s “What ifs.”