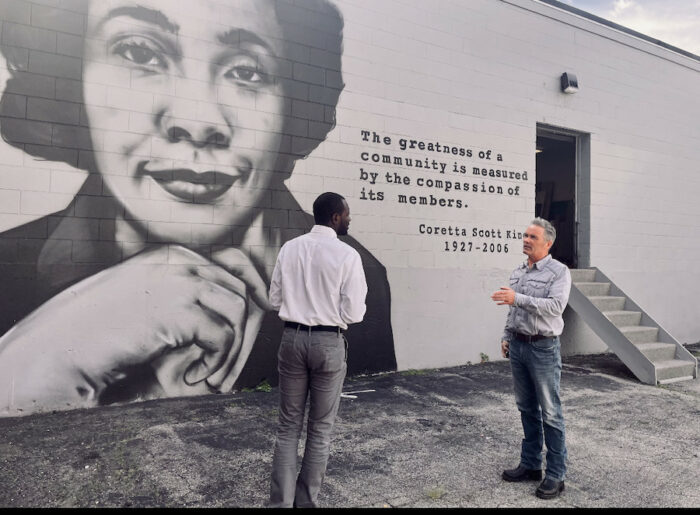 Iowa Democrats: It's time to challenge ourselves

Ellen Goodmann Miller is a community and resource development specialist and political consultant.

I’m a fourth generation Iowa Democrat activist. One of my great grandfathers helped found the local carpenters, molders, and machinist unions in Dubuque and another ran for state senate in Union County. My mom was party chair when I was a kid and my siblings and I would spend Saturdays roaming the halls of the UAW Local 94 or in the legendary smoke-filled Riverside bowling alley.

I loved it. I loved being surrounded by working-class Iowans who valued fairness and community. These experiences instilled in me a commitment to service and to justice.

Throughout my life, I’ve volunteered on and staffed many campaigns, recently on the political teams of the Biden-Harris campaign and State Representative Ras Smith’s gubernatorial campaign. And I’ve carried on the tradition of bringing my daughters with me into this world. For so long, I’ve taken pride in the values of the party and found a home among the people within it.

After my experience on Smith’s campaign, and as I’ve seen more clearly what we’re valuing as a party, I don't feel the same pride I once did, nor am I clear on our vision for the future.

I’m concerned that if we only invite people who can afford a seat at the table to decide who is worthy as a candidate in our party, we’re not only losing our way, we’re forgetting who we are.

Some fundraising challenges that our team encountered are not new. Working class candidates across this state and all over the country experience barriers regularly as a symptom of our broken campaign finance system that favors power and wealth over people. But many challenges we encountered were because Smith is a Black Iowan.

In a recent guest commentary for Bleeding Heartland, Smith spoke to the fact that many of Iowa’s institutional donors did not engage with him. I witnessed this. Ras is a three-term legislator who has passed historic legislation during a GOP trifecta and who has excellent working relationships within the Biden administration. I’m disappointed that donors were advised to direct time and resources away from the gubernatorial race. Our team didn’t feel entitled to financial support, but we had hoped for an opportunity to have a conversation – because we missed valuable opportunities to learn from each other's lived experiences and to pave the way together for progress in Iowa.

Gratefully, our experiences with people across Iowa were energizing and life-giving – always renewing our faith and reminding us why we continue to fight for higher quality of life in this state. Iowans are helpers, doers, believers. People who appreciate authenticity.

I’m disappointed that while some decision-makers were actively seeking an alternative candidate, we missed a rare opportunity to get behind an individual who was exactly what we needed at this moment in history. A candidate who had the quiet support of more than a few of his GOP peers who were worried about a general election between Smith and Governor Kim Reynolds.

Ras offered realness where our party has been lagging. A hunter-farmer-pickup-driving, lifelong Iowan dad who appeals to Independents and Libertarians is— simply on the surface— pretty exciting. Add to that a successful legislative resume, the respect he has among his GOP peers, and ability to speak to everyone at the table… and it's hard not to see his race as a factor in not being given a shot.

We have so many opportunities to see a return on investment in the future if we start to have the courage to support candidates like Smith. The messenger matters.

Iowa’s heritage can light the way for our future. We desegregated schools before the federal government. Iowa was home to the first training school for Black officers during WWI. We were the first to nominate our country’s first Black president. We have an incredible opportunity to once again lead by example through revolutionary inclusion, hope, and optimism.

And so, as we seek to refocus our work in Iowa, we need to continue to challenge ourselves. Because before we can effectively work against the destructive majority party legislation, and before we can pave a new path of revolutionary inclusion, we need to identify where and how we’re doing damage to ourselves. In order to move forward, we have to look at what's been done, ask hard questions, and challenge the way we think and operate.

I challenge every single Democrat or Iowan who repeats this phrase: “But can a Black person really win in Iowa?” to ask themselves if they would vote for a candidate of color. Because if the answer is yes, then by perpetuating this question instead of actively working to make sure we do elect candidates of color – please understand that you are the problem.

I challenge us to ask these questions:

I challenge us to notice media coverage of candidates of color:

We have important work to do in Iowa. One of our first tasks is to become self-aware of the prejudice and racism we perpetuate through our own systems of leadership. When we learn, grow, and know better, we do better.

The truth is: we know better. Let’s start challenging ourselves to do much, much better. Because I know Iowans have the capacity and courage to once again light the way for the rest of the country.

Top photo of Ras Smith (left) and Sam Mulgrew in front of a Coretta Scott King mural taken by Ellen Goodmann Miller and published with permission.