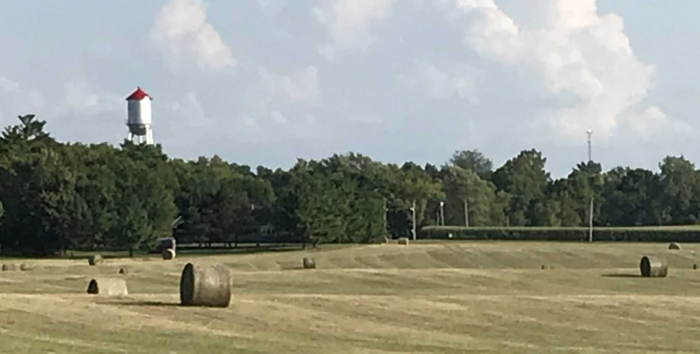 When economists talk about rent-seeking, they are usually not referring to literal payments to temporarily use someone else's physical property. Except in Iowa:

"[Iowa Governor Kim] Reynolds proposes that retired farmers no longer be taxed on cash rent for their farmland..."

More about how economists define rent-seeking differently from Iowa farmers in a moment, but here is the key point — This is not about the retired farming couple who earns $20,000 in cash rent on their paid-for farmland on top of their Social Security income. Income taxes are among the least of worries for this couple. They are likely paying nothing or very little in either federal or state income tax. And in rural Iowa today, these folks likely have many more pressing needs that could be met by an effective state government, but they won't be.

Instead, this is all about the retired farmers who would receive $100,000 or more in cash rent, either to avoid passing the land on to younger farmers or as part of a complex tax scheme involving their children's inheritance.

I'm sorry if this offends, but this second couple is in a very comfortable retirement niche that most Iowans will never see. And if you, a non-farmer Iowan, have been frugal and can now earn $100,000 from your own retirement investments in something other than farmland, then you are also being disadvantaged here.

This rental income exclusion is part of a new proposed tax plan that also institutes a "flat tax" of 4 percent, which also harms the same people in order to give advantage to better-off Iowans. More about flat tax rates later.

Adam Smith and the rent-seekers

Rent-seeking, to an economist, is an individual or corporate focus on obtaining economic gain by persuading the government to provide tariff protection (which was key to its original usage and revived under President Donald Trump), specific tax benefits, loan subsidies, or grants preferably not available to their competitors.

Rent-seeking provides no overall benefits to society, rather it results in reduced government revenue overall, needlessly-increased government spending or reduced competition in the marketplace. In the case of farmers, an excellent recent Bleeding Heartland post by Sondra Feldstein details how government incentives such as this cash rent exclusion inhibit the natural and necessary rollover of farmland ownership from one generation to the next.

Adam Smith, the oft-idolized Scottish champion of capitalism (although England and the budding United States were really more mercantilist than capitalist at the time), divided income into profit, wages, and rent, the last term in his definition referring to gaining control of land or other natural resources. England was very good at that latter quest during Smith's time. Smith's expansive concept of "rent" funded an empire and its privileged aristocracy for two hundred years, but with a lot of misery to go along with it whose effects remain today.

The modern use of the term “rent-seeking” dates to economist Anne Krueger, writing in 1974. In Krueger's updated definition, rent-seeking comprises all of the special favors supposedly capitalist companies and rich individuals ask of government.

While the always-pick-on-able Walmart has intentionally netted only about three cents on every sales dollar in bottom-line profit (a strategy I call "penny sucking" and the game-changing idea of founder Sam Walton to "fly as close to the ground as possible" in order to ruin competitors), each new Walmart built often gets local and state infrastructure and tax incentives that, in the first years, can easily exceed three percent of sales. That is rent-seeking, and “they all do it” in the American retail space today.

Examples of rent-seeking abound. The entire "defense industry" is arguably more about scooping cash from the government table than it is about capitalism. As is the "private prison" industry. As much as they say they abhor "socialism," rent-seeking through non-obvious means pretty much defines the modern Republican Party.

"Privatization" is not capitalism. Rather, it is the laundering of the needs of "the commonweal" through profit-taking businesses, often with government assisted debt financing, set prices, and little competitive bidding.

Using the tax system for rent-taking

Income exclusions for tax purposes, such as this Iowa cash rent exclusion for retired farmers, are a common backdoor Republican method of "taking rents" from the government. They know that mathematically the most effective tax reduction is found in making sure that "my income" (and not yours) never gets counted as income for tax purposes in the first place.

Going by the banal name of "tax expenditures," this reduction in tax collections by favoring some forms of income over others has been estimated to amount to more than $1.3 trillion dollars per year. The two largest invisible tax expenditures, according to the Tax Policy Center, are the tax break given to companies who provide subsidized health insurance to their employees (as opposed to, say, the more direct-to-consumer standard Medicare) and the favored tax status of capital gains income and certain dividends over the wage income earned by most Americans.

Almost every tax deduction, credit, and exclusion complicating your tax calculation started with a Washington lobbyist doing rent-seeking for special-interest clients. The best and most equitable way to simplify taxes, conversely, is to simply say that "income equals income" and to eliminate special-interest tax expenditures.

Even assuming that all income was treated equally, there is still the issue of flat tax rates, as proposed by Governor Reynolds, versus graduated rates. First, assume that if Reynolds is for it, then she is being paid by campaign contributors to champion the concept.

The second reality is that lower-income citizens, while often partially sheltered from the income tax hit because of graduated rates, still pay, directly or indirectly, a large share of their income in other taxes. A sales tax, for instance, takes much less of a percentage of my own total income, as a retiree putting few miles on his car, than it does of someone who struggles to afford gasoline for the commute to work. Property taxes are embedded in rent, and Social Security is taxed from the first dollar earned. Top corporate executives, on the other hand, pay a minuscule percentage of their total income in Social Security taxes.

While the average worker typically counts dollars in a linear fashion (e.g., a raise of $50 per week), rich people know that it is the percentage of pay increases and investment earnings that really counts. You can trace much of the income inequality that has developed over the last 30 years to differences in annual raise percentages between the different classes of employees. It takes a 3 percent annual raise 24 years to double one's income, but an executive getting a 10 percent raise is making twice as much in only seven years, and eight times as much in 21 years.

Rich people hate graduated taxes because that very percentage is rising. And while Reynolds has claimed a graduated rate is too "complex," the computation problem is really trivial for either a young iPhone app coder or an old Republican spreadsheet user.

A disclaimer: The gradual move of my own family from rural Iowa to Florida was driven not by taxes but rather for medical reasons, expedited by a badly-botched roll-out of the Affordable Care Act by Iowa Republicans. Florida, in my opinion, would do well to adopt an income tax to quell the flush of "dirty money" in the state and to more equitably support its very diverse citizenry, including in my own neighborhood. But that won't happen.