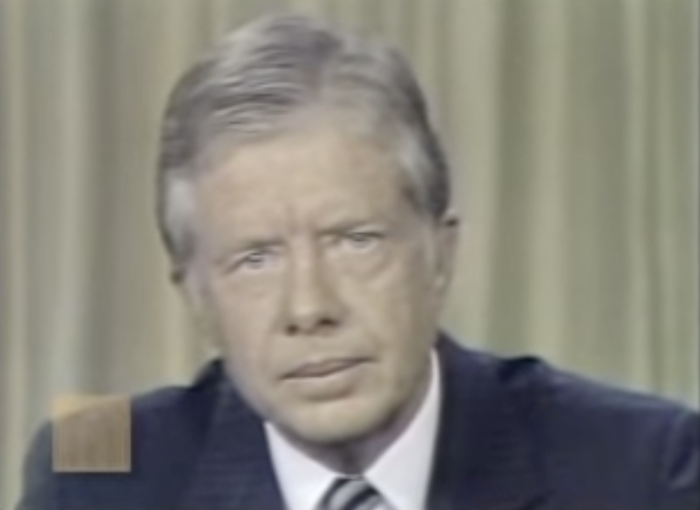 This column is being written shortly before President Joe Biden delivers his first State of the Union address, probably among the most important speeches of his presidency. Undoubtedly, there’s been considerable input gathered in preparation for his March 1 address. Presumably, some ideas in early drafts will be jettisoned, yielding precious time so the president can explain and interpret events in Ukraine.

Anticipating Tuesday’s speech, I reflected on other important presidential addresses in recent years. As a potential point of inflection, my mind wandered to Jimmy Carter and what is generally referred to as his malaise speech, July 15, 1979. President Carter sought to jolt our country from a foggy feeling of hopelessness. National confidence had diminished, replaced by a vague sense the American epoch was over. Carter delivered an introspective address, striving to change our energy future through decreased dependence on foreign oil and collective sacrifice.

President Carter hoped an energy transformation would enable us to regain a healthy national swagger. Many energy-related themes he had introduced more than two years earlier, in what became known as the “Moral Equivalent of War” speech, a phrase borrowed from William James, a leading thinker of the late 19th and early 20th century. James delivered an address by that title at Stanford University in 1906, words often appropriated both before and after Carter… although the acronym, MEOW, probably didn’t do the President any favors.

A quote from President Carter’s 1979 speech:

“I want to talk to you about a fundamental threat to American democracy…The threat is nearly invisible in ordinary ways. It is a crisis of confidence that strikes at the very heart and soul and spirit of our national will. We see this crisis in growing doubt about the meaning of our own lives and in the loss of a unity of purpose for our Nation.”

I cite President Carter because President Biden is challenged by comparable circumstances. Not meaning to minimize inflation we’re now experiencing – 4.7 percent for 2021 – in the first half of 1979, the government reported inflation “at a blistering annual rate of 13.2 percent”. Long gas lines then stretched for blocks; when available, gas sold for $.86/gallon, the equivalent of $3.30 in 2022 dollars, close to the cost throughout Iowa today. President Carter observed, “the gap between our citizens and our government has never been so wide,” which might also be said in 2022.

But the late 1970s had no equivalent to the COVID-19 pandemic, which has left citizens discouraged and demoralized and our society perilously divided. It all points to the tall order facing President Biden Tuesday eve. Without knowing what the President will say, he has given hints about an anticipated tone. For example, “After almost two years of physical, emotional, and psychological impact of this pandemic, for many of us, it's been too much to bear…Some people may call what's happening now 'the new normal.’ I call it a job not yet finished. It will get better.” (He’ll probably add, it has gotten significantly better recently.)

This is obviously not the time for mission accomplished or an unwarranted victory lap. Too many people are hurting, struggling, and apprehensive. It’s time once again for the President to demonstrate his admirable empathy. A refrain Biden attributes to his father comes to mind. “Americans don’t expect government to solve all their problems, but they want their leaders to understand them.”

Americans seek reassurance that the president identifies with our plight… that plans implemented have made, and future proposals certainly will make, the desired difference. Some Truman-like plain speaking is called for to address COVID-19, inflation, and now Ukraine. I won’t mention the long list of other important issues and concerns, and humbly suggest he might consider a comparable decision.

The state of the union right now is stressed. Nevertheless, I remain convinced Joe Biden is the right leader for these anxious times. I trust he will justify my confidence on Tuesday evening.

Editor's note: President Carter never used the word "malaise" in the speech that became known by that name. You can watch the full video of his address here or read the full transcript here.

Top image: Screenshot from the video of the speech President Jimmy Carter delivered on July 15, 1979.