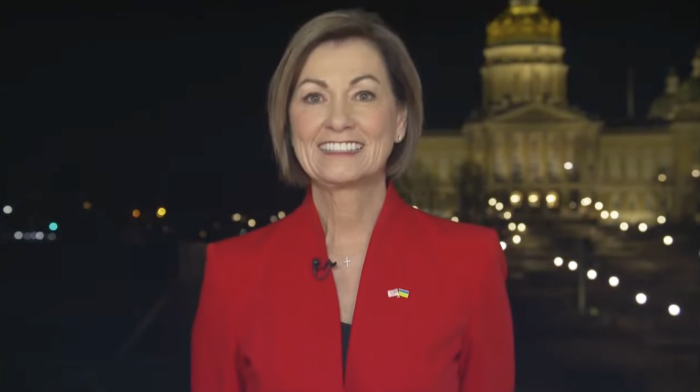 Governor Kim Reynolds delivered the Republican response to the State of the Union from a government building terrace that is currently closed for rentals, and her office paid nothing to use the space.

The governor's spokesperson Alex Murphy confirmed on March 2 that Reynolds gave the speech from the State Historical Building terrace. Five days and several emails later, Murphy confirmed the building "did not charge a fee for the Governor’s use of the space."

Communications staff for the Iowa Department of Cultural Affairs did not respond to messages over the past week seeking to clarify who approved the unusual arrangement for the governor.

The State Historical Building's terrace was an ideal location for Reynolds to deliver the most high-profile remarks of her career on March 1. The opposition party rarely can provide visuals as striking as the president's annual address to a joint session of Congress. Reynolds had the illuminated gold dome of Iowa's state capitol behind her as she made her case against the Biden administration and for Republican governance.

The venue was important enough to be written into the governor's script. Around the 12:00 mark, she told viewers, "Behind me stands Iowa's capitol, where we display our state motto: Our liberties we prize, and our rights we will maintain."

I wondered whether the governor's office paid for this stagecraft, or whether the expense would be charged to a political organization, such as the Reynolds/Gregg campaign, the Republican National Committee, or the Republican Governors Association. Staff at the Iowa Department of Cultural Affairs did not respond to messages asking who booked the space, what entity was to be billed for the use of the space, or how much it normally costs to reserve the terrace for an evening event.

A longstanding State Historical Building policy gives state government agencies a 20 percent discount for renting space at the facility. In other words, it is not standard practice for state government officials to use the building at no charge.

After Reynolds' spokesperson confirmed on March 7 the terrace was provided for free, Department of Cultural Affairs staff did not answer additional questions, such as: Who approved access to the space for free?

How long were the governor and her staff using the terrace on March 1?

How many other individuals or entities have been able to use areas in the State Historical Building at no cost?

Unable to obtain answers from the agency that manages the building, I called the State Historical Building number listed for rentals. Staff confirmed that due to ongoing renovations, both the grand terrace and the smaller terrace next to Café Barrattas are closed to the public and cannot be rented for events. In fact, the auditorium is currently the only part of the historical building available for rental.

While the building is being renovated, staff are working on updated fees for using various spaces. So I was not able to determine how much the governor's office would have paid to rent the terrace, had they been charged a normal fee for a state government agency (20 percent off the list price).

Who cares if the governor was able to save a few hundred bucks on a facility rental?

Aside from the favoritism that allowed Reynolds to use a space now closed to other Iowans, the governor's free ride could be important from the perspective of the "self-promotion law" Iowa Republicans enacted in 2018.

Iowa Code Chapter 68A.405A prohibits the use of taxpayer funds to promote the name, likeness, or voice of statewide elected official or member of the legislature "through any of the following means":

(2) A paid radio advertisement or promotion.

(3) A paid newspaper advertisement or promotion.

(4) A paid television advertisement or promotion.

(5) A paid internet advertisement or promotion.

(6) A paid exhibit display at the Iowa state fair or a fairground or grounds as defined in section 174.1.

The State of the Union response doesn't fall into any of those categories. But if the Reynolds campaign plans to use video footage or audio clips from that speech in paid television, radio, or digital advertising, any state funds spent to use historical building space on March 1 would raise questions about compliance with the self-promotion law.

A video shared on the governor's political Twitter account and Facebook page in connection with her campaign launch on March 9 included a short snippet from the State of the Union response:

I expect other clips from that speech to appear in Reynolds' campaign advertising, given the stunning visuals and the way she expressed talking points that will surely be part of her case for re-election.

I will update this post as needed if state officials answer any of my outstanding questions.

UPDATE: Jon Neiderbach expressed the view that the use of a state government building at no charge for this speech could constitute a violation of Iowa Code Section 68A.505, which prohibits the use of public monies for political purposes.