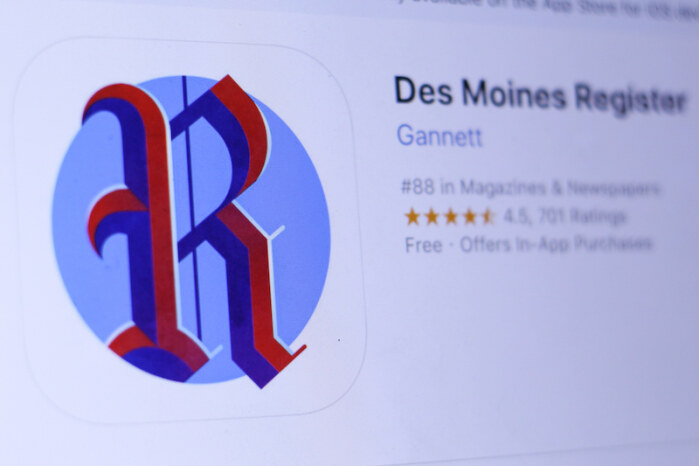 Ordinarily, I would submit this to you as a guest opinion essay. But you've announced that the Register, once counted among America's great newspapers, CORRECTION: The newspaper will continue to consider unsolicited guest columns but will "accept far fewer" of them in the print edition.

So I share my views on this blog, which now exists as apparently the sole outlet for members of the Des Moines community wishing to make their opinions known, civilly and responsibly.

In the print edition dated March 13, 2022, you commented about the addition of a new columnist, saying: "I believe this demonstrates the Register's continued commitment to providing forums for robust discussion of community topics." My response, to you and the other top executives of the "media company," which you now call yourself: No. It doesn't. More about that later.

But that has inspired me to write you about an inevitable move I urge you to make, sooner rather than later:

No, that isn't a typo: I urge you to allow the broadsheet, which brought scores of talented and energetic reporters and editors to a landlocked agricultural state in the middle of the Midwest (including me, 37 years ago), to die with dignity instead of keeping it on a respirator while dear admirers stand over its painful demise.

It's pretty obvious that you and your corporate masters want it dead. Why else would you "put the paper to bed" so early, before evening meetings and sports events are concluded, so the results don't appear in the following day's paper? Why would you cease publication on Saturday, when thousands of Iowans want to see how their high school athletes fared? I recall that my colleagues on the Register sports desk considered the Saturday paper second in importance only to Sunday's "Big Peach."

Can the Monday paper, another light readership day, be far behind? And what then? Who needs a four-day-a-week "daily newspaper"?

Look, I get it: You're all about making profits. So why devote vanishing money and resources to produce printed sheets that tell of events, including state and local stories, that occurred 18 hours ago, when TV and the internet already reported them as they happened? Or "deja news" -- stories that ran on your website two, even three days before?

So kill the print paper already. When you play Angry Birds on your phone, you don't need a newspaper to line real-life bird cages. And why should you worry about those Iowans of a bygone age, who rose above bumpkinism thanks to the daily Register's healthy dose of information, ideas, and viewpoints.

What will you now give us, Mr. Grundmeier? Who will be the carefully selected "true experts on a subject," as you described them? Instead of our well-informed and erudite peers, or nationally regarded syndicated columnists, will you be treating us only to the opinions of plastic surgeons who deem themselves qualified to comment on energy? Or academics who too often talk down to those they study? Or business people motivated by financial or political gain?

Once, The Des Moines Register felt obligated to elevating Iowans' knowledge and awareness to a level other rural states could only envy and never achieve. Forsaking that obligation is sure to accelerate Iowa's downward spiral into the tribalism endemic of so many other states.

But you don't have to contribute to that shameful end. Instead, you can commit to the aim of the Register as laid down by Editor Carol Hunter at the end of 2021: a reliable source of "trustworthy reporting ... commitment to accuracy ... seeking out views from all sides ... commitment to fairness ... challenge our own biases ... look at possible solutions ... reach out and truly listen."

I agree with you -- newsprint is nearly as anachronistic as piano rolls in the age of digitally streamed music. But even in a different form, the music remains. As long as there's a quality orchestra capable of playing it.