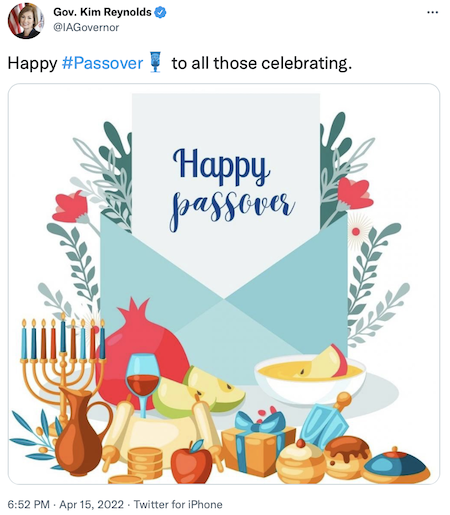 "Happy #Passover to all those celebrating," Governor Kim Reynolds tweeted on the evening of April 15, as one of the most important Jewish holidays began.

The attached image was comically ill-suited for that greeting.

I hadn't noticed the governor's tweet until KCRG-TV's Ethan Stein, one of Iowa's few Jewish reporters, reacted to it late Friday night. Stein was gracious and assumed the best intentions, but observed, "the person who made this graphic has no idea what Passover is or how we celebrate our holiday." 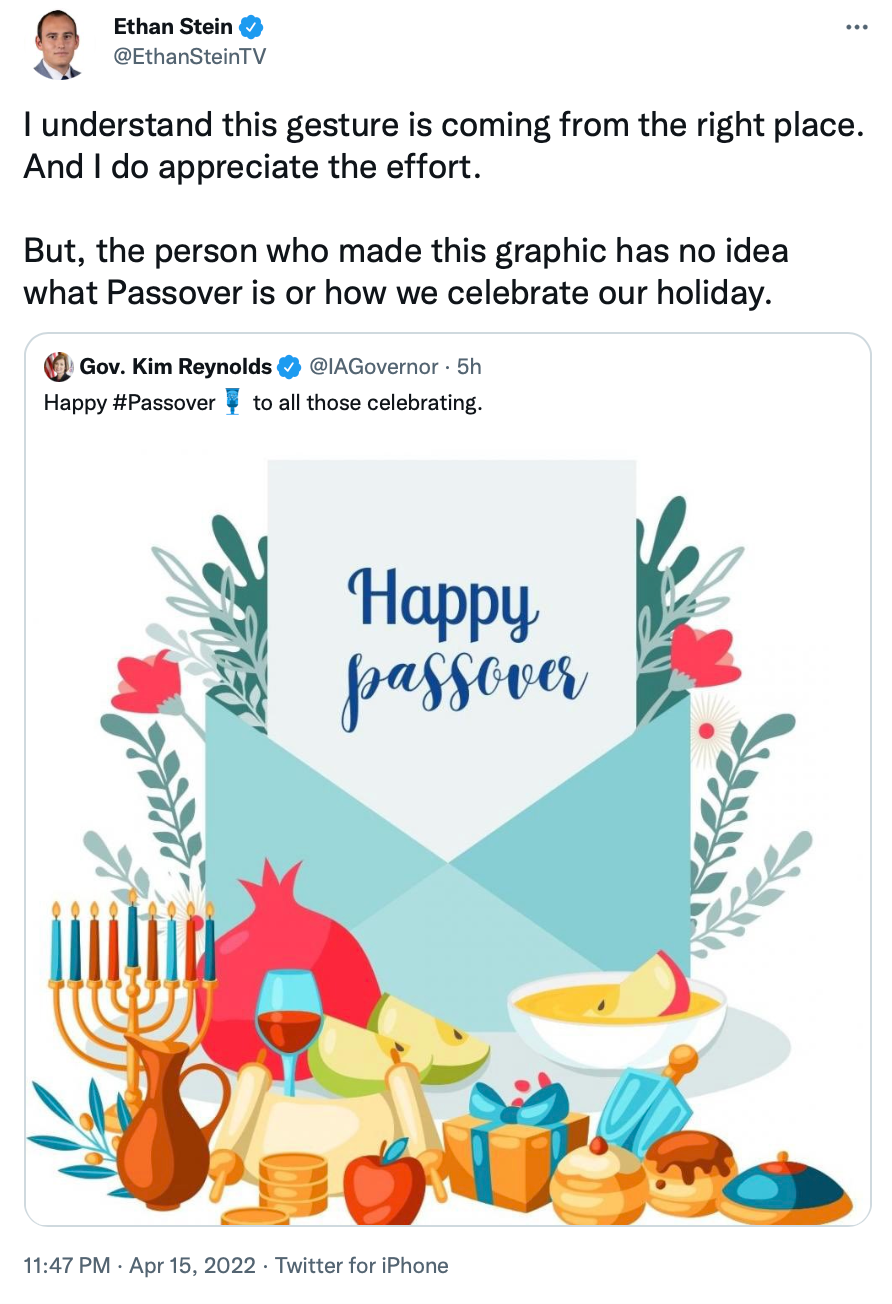 The two items that universally signify Passover—matzah and a seder plate— are missing here.

The menorah near the lower left caught my eye first. It's the best-known symbol of Chanukah. Moving across the bottom of the image, we see other items associated with that holiday: gelt (gold-colored coins), a wrapped gift, a dreidel, and donuts. The most basic element of Passover observance is not eating leavened bread products.

Just under the envelope, we have apples and honey, a treat served on Rosh Hashanah (the Jewish new year, which falls during September or October). The pomegranate is another symbol of that holiday.

I was so stunned by the montage that I didn't initially notice the Torah scroll.

Jews are very careful about handling the scrolls, which are "the holiest objects in Judaism." They contain the portions of the Hebrew Scriptures known as the five books of Moses (Genesis, Exodus, Leviticus, Numbers, Deuteronomy). The parchment is not supposed to be touched by human hands and would never be rolled out near food or drink.

How on earth did the governor (or more likely, the staffer in charge of her social media) land on this picture?

The meme turned out to be a free image available on Canva. That website also had more appropriate Passover cards, but those were labeled "PRO" to indicate they required a paid subscription. 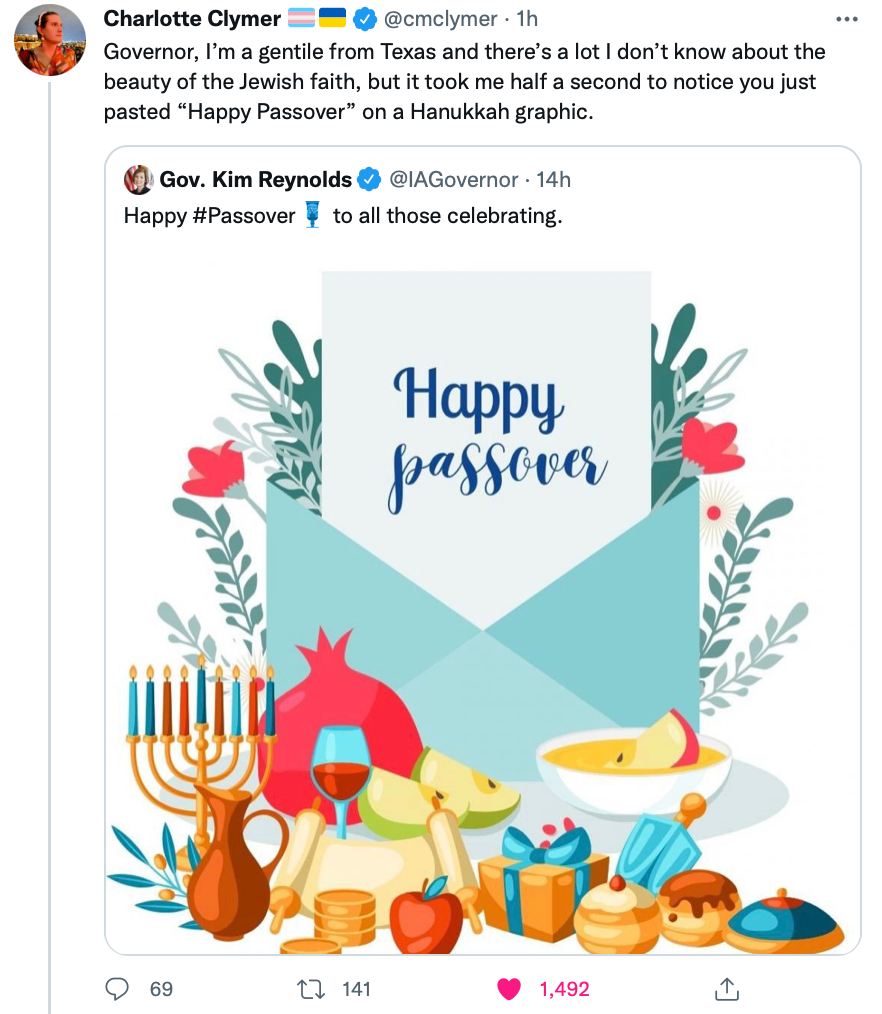 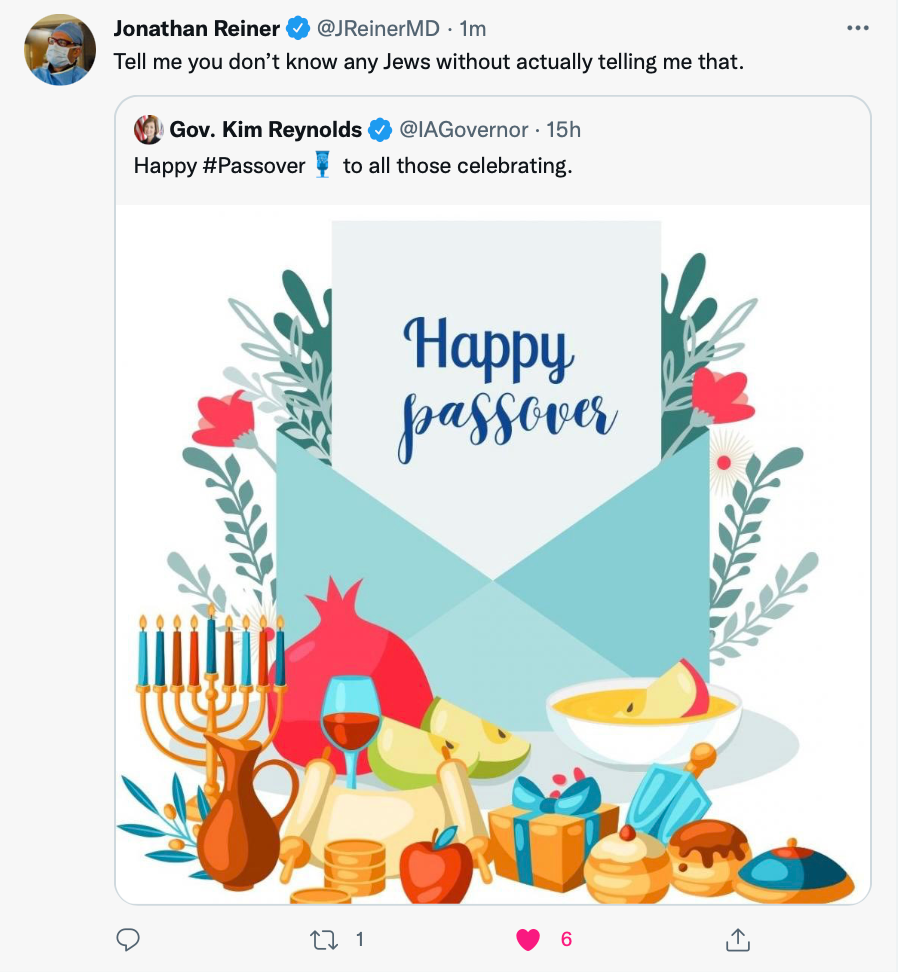 Some commenters were just bewildered the tweet was still online. By 10:00 am, the governor's tweet had inspired more than 500 "quote tweets," many from people with large national followings. Sometime around noon, the tweet finally disappeared.

No one posted an apology or a more fitting Passover greeting to Reynolds' 53,700 followers.

I sought comment from Reynolds' spokesperson Alex Murphy soon after the tweet vanished but didn't write about the episode immediately. Knowing the governor and her staff would likely be busy over Easter weekend, I decided to try again on Monday.

Murphy didn't respond then either, so I have no idea who selected the image, who approved it, or who made the call to delete it. I also don't know whether the governor or her staff will consult with Iowans who practice other faiths in the future before posting about non-Christian religious holidays.

Iowa Democratic activist C.J. Petersen summed up the right lesson from this fiasco: "Always check your cultural competency before posting something that doesn’t make sense in context."

UPDATE: The governor's gaffe made it into late-night comedian Jimmy Kimmel's monologue. "We spent four dollars on this Jewish clip art package, and damn it, we're going to use it!"