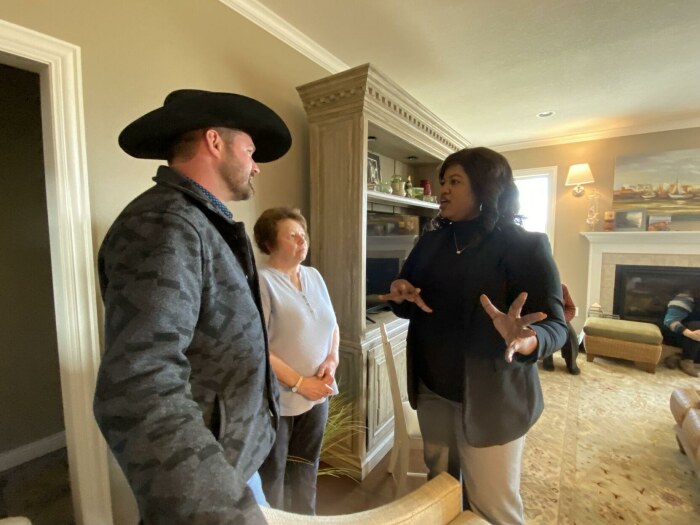 A case for Dave Muhlbauer as Deidre DeJear's running mate

She earned her political bona fides working for a young, charismatic long shot back in 2008 — and in 2018, when she was Iowa’s first Black statewide nominee of a major political party, President Barack Obama returned the favor with his endorsement of her bid to become Iowa’s secretary of state.

In DeJear, Iowans have a gubernatorial standard-bearer who is long on accomplishments and short on empty rhetoric. She seeks solutions that make sense, finds common ground when it counts, and doesn’t leave the room until a deal is done. DeJear’s friends affectionately call her “Deeds,” and it fits because of what she represents: a shift toward action over empty promises from the governor’s mansion.

For Iowa Democrats, the electoral landscape lately has been fraught with tough luck for our candidates – it’s been nearly a decade since Obama won our state by a wider margin than his national victory, and eight years since the U.S. Senate seat held by progressive giant Tom Harkin flipped. Berkley Bedell? The kids these days have never heard of him.

Despite those trends, what drives Iowans to vote for our leaders remains the same: we pride ourselves on authenticity. We crave something real, a person who’s been there and done that. You don’t have to be the smartest person in the room, but we’d like to know you’ve learned a thing or two before asking for our votes. DeJear checks all those boxes, and then some.

Taking back Terrace Hill in 2022 isn’t going to be a cakewalk. Defeating an incumbent governor in Iowa is like setting out to travel from Havana to Miami on a fishing raft: it can be done, but you should see their faces when they finally land. Deidre DeJear is a strong candidate, and I know she will guide us to victory in the fall. Even the strongest leader, though, needs a great lieutenant.

Dave is a public servant with the unique experience of running and winning the votes of people who disagree with him on most issues. A lifelong Democrat and resident of rural western Iowa, Dave was raised by a mom and dad who lived on the land and made do with what they had, enduring challenges from the farm crisis to the effects of climate change.

His dad and granddad were state legislators; you could say service is in his blood. But Dave always made his own way, and was elected to his county board of supervisors in 2016. In 2020, he fell just short (96 votes!) of being re-elected in deep-red western Iowa, but bested the top of the Democratic ticket, notching 1,000 more votes than Joe Biden pulled in Crawford County that year.

I first met Dave when I was running for the Iowa Senate. “Come ride with me in the tractor,” he offered, reminding me how little I really knew at the time about the agricultural issues he knew forward and backward. A committed team player whose day job is spent between the field and the feedlot, Mr. Muhlbauer has always struck me as a good listener who cares about doing things right.

It is easy to see why many were thrilled when Dave entered the race for Chuck Grassley’s U.S. Senate seat last spring. His announcement video made waves in Iowa political circles. Many rural folks, myself included, pledged money to his effort. Just over a week ago, in a conversation with a couple of fellow dirt road Democrats, we agreed: Dave still would’ve made the best senator.

God sometimes challenges us in ways that alter our course. As a rural, gay, disabled, recovering alcoholic who loves Jesus and progressive politics, I have some experience with this. But no one knows the hard truth better than Dave Muhlbauer, who has experienced great personal loss in the course of the last two years. The weight of that loss, the death of his nephew in an accident, ended his run for the Senate. After that, I didn’t see him for quite a while (we’re human, after all).

But sometimes out of grief can come renewed purpose, and I’m betting that Dave’s service to our state isn’t finished yet.

He’s the kind of guy who doesn’t sit still when there’s work to be done. So, hear me out: Dave Muhlbauer would make an excellent nominee for lieutenant governor on a ticket with Deidre DeJear.

At an event in Carroll County last month, Muhlbauer and DeJear together made a dynamic duo: tactful and tenacious, humorous and humble, gracious and gritty. As the No. 2 for a history-making ticket, Dave Muhlbauer would bring a farm boy’s charm and a dirt road Democrat’s comfort engaging with skeptics.

His manners match his smarts in all the ways that count.

There’s something to be said for geographic diversity for a party that doesn’t nominate folks from western Iowa very often. And it’s hard to think of anyone more well-prepared or informed on the issues that affect local governments (a key constituency for any administration) than a former county supervisor. Rural roots meet business savvy. Pantsuits and cowboy boots. Blue jeans and – well, you get the picture.

Deidre DeJear offers a bold, fresh vision for Iowa’s future: rural broadband for the 21st century economy, real investment in public education and child care, economic development and mental health care that works for everyone. DeJear’s campaign is compelling because it centers its faith not in the candidate, but in all of us: if we just put a little bit of our time, treasure, and talent forward, we can have the future we deserve.

It’s a campaign built on the idea that everybody’s got a voice. So, here I am, putting forward my two cents (and Mr. Muhlbauer’s trademark cowboy hat).

I’m rooting for Deeds and Dave.