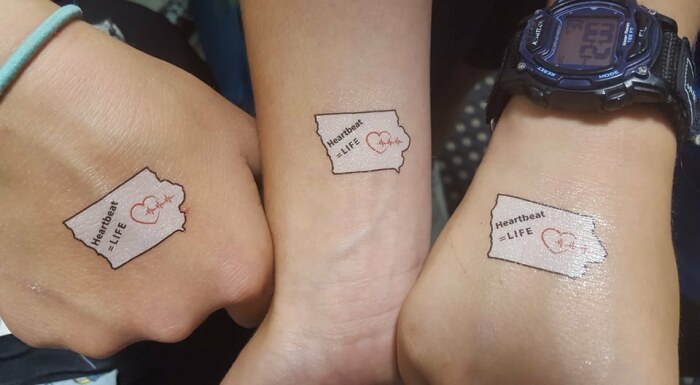 What could happen in Iowa after Roe is overturned

Assuming the court overrules Roe sometime in the next two months, abortion will become illegal immediately in more than a dozen states. Other Republican-controlled states, including Iowa, will likely pass total or near-total abortion bans soon after.

But any such law could not take effect here as long as a 2018 Iowa Supreme Court precedent stands. In that case, the majority held that the Iowa Constitution protects a fundamental right “to decide whether to continue or terminate a pregnancy,” and any limits on that right are subject to strict scrutiny.

That ruling could be overturned in two ways.

In the 2018 case, five justices struck down a 72-hour waiting period for all abortions, which was part of a 2017 law that also banned almost all abortions after 20 weeks gestation. (The 20-week ban remains in effect.)

But four of the five justices who were part of the 2018 majority no longer serve on the court. Governor Kim Reynolds has appointed their successors. So in June 2020, Republican lawmakers approved and Reynolds signed a 24-hour waiting period for all abortions. During the Iowa House and Senate debates on that bill, floor managers used language modeled on the dissent from the 2018 majority opinion; the two dissenting justices still serve on the high court.

A Johnson County District Court judge struck down the 24-hour waiting period last summer, citing both the 2018 precedent and the legislative process used to pass the bill in the middle of the night on the last day of the session. The judge determined that the last-minute change violated the Iowa constitutional provision known as the single-subject rule.

The state appealed that ruling, and in February, the Iowa Supreme Court heard oral arguments in Planned Parenthood v. Reynolds II. (You can watch them here.) The court will likely publish its decision before the end of June. Bleeding Heartland previously discussed four possible approaches in detail. To sum up briefly:

1. If a majority of justices reverse the 2018 precedent and find the Iowa Constitution does not protect any fundamental right to an abortion, then a new state ban (perhaps modeled on the 2018 law prohibiting almost all abortions after six weeks of pregnancy) could take effect quickly.

2. On the other hand, the dissenting justices in the 2018 case advocated for viewing abortion laws through an "undue burden" lens, similar to the U.S. Supreme Court's precedent in Casey. If the Iowa Supreme Court abandons the "strict scrutiny" standard but determines that the state constitution protects abortion rights from restrictions that pose an undue burden on women, then justices might uphold the 24-hour waiting period, but possibly not a future law approaching a total ban.

4. Finally, the justices could sidestep any position on abortion restrictions and the 2018 case by striking down the 24-hour waiting period as a violation of the state constitution's single-subject rule. An amicus curiae brief filed by the League of Women Voters of Iowa made a comprehensive argument for resolving the case "on narrow single-subject grounds."

If the second, third, or fourth scenarios play out, then politicians seeking to ban abortion will have to wait at least a year and perhaps two years to undo the Iowa Supreme Court precedent another way.

STATE CONSTITUTIONAL AMENDMENT AT LEAST ONE YEAR OFF

During the 2021 legislative session, the Iowa House and Senate approved a state constitutional amendment that reads, "To defend the dignity of all human life and protect unborn children from efforts to expand abortion even to the point of birth, we the people of the State of Iowa declare that this Constitution does not recognize, grant, or secure a right to abortion or require the public funding of abortion."

In order to add that section to our state's founding document, Republicans would need to maintain control of both legislative chambers after the 2022 elections, then approve identical language in either 2023 or 2024. The matter would then go on a statewide ballot, and would require a majority vote to be enacted.

Typically, proposed constitutional amendments are included on Iowa's general election ballots. But the legislature need not wait until November 2024 for the public's judgment. Lawmakers could schedule a statewide vote at any time. Constitutional amendments to limit state spending and require a supermajority legislative vote for any tax increase were on a June 1999 ballot. (Voters rejected both proposals.)

In light of opinion polls showing most Iowans don't support adding abortion language to the constitution, Republicans might see an advantage in passing the amendment early next year and setting the vote for the spring or summer of 2023. Turnout for a special referendum on the abortion amendment would be much lower than in a presidential election year. A low-turnout environment might favor abortion opponents.