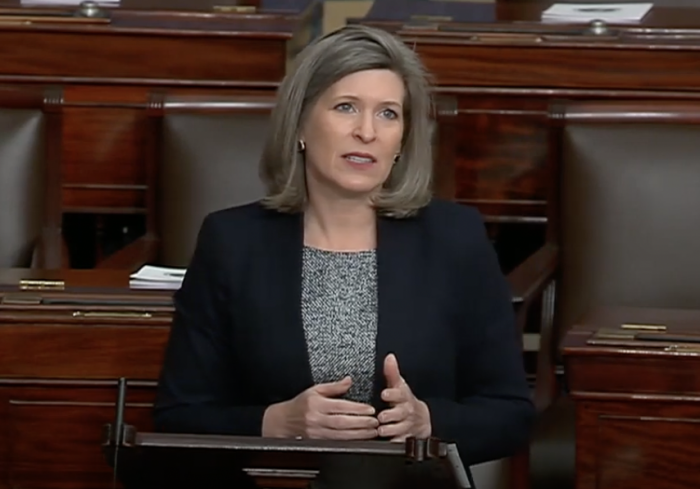 U.S. Senator Joni Ernst has said little publicly about abortion since Politico published a draft opinion indicating that the U.S. Supreme Court is poised to overturn the Roe v Wade and Casey precedents. The topic wasn't mentioned in any of the seven press releases her office has published since the news broke on May 2.

Speaking to the conservative network Newsmax the morning after Politico published the draft opinion, Ernst and her interviewer focused on the leak (which the senator described as "absolutely abhorrent"). They did not discuss how Republicans in Congress would respond to a decision sweeping away rights women have enjoyed for nearly five decades.

But according to an article by a well-sourced reporter, Ernst has been part of closed-door talks on the best way to ban abortion nationwide.

Like many conservatives who oppose abortion rights, Iowa's junior senator has either avoided commenting on the coming bombshell from the high court or kept the focus on the leaked opinion. "So whoever has done this has really thrown our Supreme Court under the bus," she told Rob Finnerty of Newsmax.

She added that she is "adamantly pro-life," and that the draft opinion "does not strike down abortion completely. It allows those state legislators to make those decisions for their own constituents in their own states."

One might get the impression that Ernst considers abortion to be a matter best regulated at the state level. But Caroline Kitchener, who covers abortion for the Washington Post, reported on May 2,

A group of Republican senators has discussed at multiple meetings the possibility of banning abortion at around six weeks, said Sen. James Lankford (Okla.), who was in attendance and said he would support the legislation. Sen. Joni Ernst (R-Iowa) will introduce the legislation in the Senate, according to an antiabortion advocate with knowledge of the discussions who spoke on the condition of anonymity to discuss internal strategy. Ernst did not respond to a request for comment.

Ernst's staff didn't respond to Bleeding Heartland's inquiries about the Washington Post story. But NBC News quoted Ernst as confirming on May 5 that Republicans are debating a possible federal abortion ban.

Some other GOP senators told NBC News they favored letting states regulate abortion. So even if Republicans win control of the U.S. Senate this year and eliminate the filibuster in 2023, they may not have enough votes to pass a national ban.

Ernst hasn't regularly organized conference calls with Iowa reporters lately, and her staff have never allowed me to ask a question on any such call. Journalists who have access to Ernst through reporter calls or interviews with local media should press her for answers: Is she planning to introduce a nationwide ban on abortion after six weeks of pregnancy, or after a fetal heartbeat can be detected?

While they're at it, they can ask the question Ernst dodged a year and a half ago, when posed by Douglas Burns of the Carroll Times Herald: how should abortion patients or abortion providers should be punished if Republicans succeed in banning the procedure? "I'm not going to go there because I don't see [Roe] being overturned," Ernst told Burns in October 2020. "There's a minimal chance."

The senator's staff didn't respond when I asked this week about possible criminal penalties for violating an abortion ban.

Top image: Screenshot from video of Senator Joni Ernst speaking on the U.S. Senate floor on February 25, 2020 about Republican proposals to "defend life" by limiting some abortion procedures.