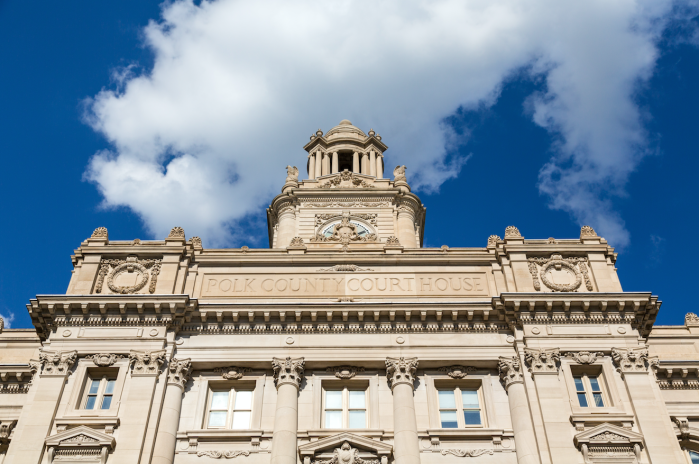 A Polk County District Court has rejected Governor Kim Reynolds' attempt to have an open records lawsuit tossed without being considered on the merits. It was the third time in the past five months that a court denied the state's motion to dismiss a suit claiming the Reynolds administration violated Iowa's open records law.

I am among the plaintiffs who sued the governor and some of her staff in December over five unfulfilled requests I had submitted to her office, two requests submitted by Clark Kauffman of Iowa Capital Dispatch, and one request submitted by Randy Evans of the Iowa Freedom of Information Council.

About three weeks after the ACLU of Iowa filed the lawsuit on our behalf, the governor's office provided most of the records we had requested (in some cases more than a year earlier). The state's attorneys then sought to have the case dismissed as moot.

In a ruling issued May 6, District Court Judge Joseph Seidlin determined that if producing records alone could render a case moot, "then there would be no enforceable obligation to turn over public records until the responsible party or entity is sued. The Act did not intend to require citizens of this State to sue in order to obtain government records."

The judge cited the Iowa Supreme Court's 2013 precedent known as Horsfield. In that case, the justices unanimously held that the city of Dyersville's "substantial and inadequately explained delay in responding to the supplier’s open records request violated the law," even though the government entity provided the records after the lawsuit was filed.

Seidlin also rejected the state's argument that the case presents a "political question" not subject to judicial review. He noted that Iowa's open records law, known as Chapter 22,

did not exclusively entrust discretion regarding whether to allow examination of public records to the executive branch. Instead, the legislature required government bodies to provide examination of public records; included certain exceptions, defenses, and reasonableness considerations; and allowed aggrieved persons to seek judicial enforcement. The interpretation of statutes and consideration of defenses is the type of dispute within the judiciary’s role to address.

The state had also asserted that any claim the governor's office did not provide records in a timely manner would "infringe on the Governor’s executive privilege by forcing her to reveal information protected by the privilege to defend the reasonableness of her efforts to respond."

The court rejected that argument, saying it was "not possible" at this stage of the litigation "to know what evidence will be sufficient to prove or defend against the alleged violation."

In our lawsuit, we asked the court to order the governor's office to provide the records and to "refrain for one year from committing future violations of Chapter 22." The state sought to have that request declared moot, since records had been provided. The ACLU argued on our behalf that the governor's office withheld some records as exempt from the open records law. The judge ruled, "This is a fact question not appropriate for decision on a Motion to Dismiss."

The latest ruling was not surprising; some passages were repeated verbatim from an order Judge Seidlin issued in January. In that case, the court denied the state's motion to dismiss the lawsuit Utah attorney Suzette Rasmussen filed against the Iowa Department of Public Health last July.

Similarly, Polk County District Court Judge Sarah Crane ruled in December against the state's effort to dismiss Rasmussen's litigation against Reynolds and her staff. That order also cited the Iowa Supreme Court's Horsfield precedent, which found an open records violation because the city provided records 71 days after the request, and only after the plaintiff filed suit. The governor's office provided records to Rasmussen only after she filed suit, which occurred 174 and 175 days after her initial records requests.

Judge Crane rejected the claim that the case presented a non-justiciable "political question," and found that any invocation of executive privilege with respect to Rasmussen's suit was "premature."

The state appealed the judges' rulings on the Rasmussen cases, and the Iowa Supreme Court granted the applications for interlocutory appeal, meaning the justices will eventually rule on whether those open records lawsuits should be dismissed. The state has 30 days from May 6 to appeal Seidlin's decision allowing our lawsuit to proceed.

UPDATE: The state appealed, and the Iowa Supreme Court granted the application for interlocutory appeal.