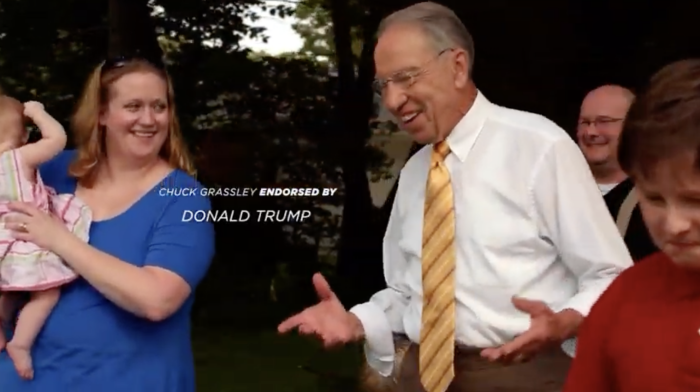 Efforts by Donald Trump and his allies to pressure Vice President Mike Pence were the focus of televised hearings the House Select Committee investigating the insurrection held on June 16. Witness after witness testified about the illegal and unconstitutional plot to subvert the electoral college count on January 6, 2021.

Several documents laying out the plan to keep Trump in office foresaw a possible role for U.S. Senator Chuck Grassley, who (as the Senate president pro-tem) would have presided over Senate proceedings that day in Pence's absence.

Grassley and his staff have repeatedly said the senator was not recruited to derail the electoral college count and was unaware of memos or PowerPoints mapping out the coup. When Bleeding Heartland asked about Franken's questions on June 16, the senator's campaign spokesperson bashed the Democrat for supposedly spreading a "conspiracy theory."

The reality is that no one has done more than Grassley to make people wonder whether he was recruited to help Trump stay in power.

The starting point for Franken's questions was Grassley's widely-quoted statement to reporters on January 5, 2021: "Well, first of all, I will be — if the Vice President isn’t there and we don’t expect him to be there, I will be presiding over the Senate."

Grassley's staff quickly walked back that comment, saying the senator meant only that he would preside if Pence was not present for some portion of the Senate debate. But documents released later showed that Trump's allies had been counting on "Chuck Grassley or another senior Republican" to refuse to count electoral votes from some states Joe Biden carried.

Taylor Foy, communications director for Grassley's U.S. Senate office, referred me to campaign staff for political reaction, but noted, "Maybe Mike should read Bleeding Heartland’s coverage on this issue!" (On several occasions I have quoted the official denials from the senator or his staff.)

Campaign spokesperson Michaela Sundermann replied to my inquiry as follows:

You have reported on this before and included statements from Senator Grassley’s office noting that Senator Grassley was never approached about a plan for January 6. You know the answers to these questions as well as I do. Moreover, this has been widely debunked, including by New York Times writer Nic Fandos and Washington Post writer Aaron Blake. Even a former Obama administration staffer called on Roll Call to delete the dishonest tweet in real-time to combat the fake news from which this conspiracy theory started. It's interesting that either Mike Franken doesn't read your reporting, or ignores it. What's even more interesting is his motive behind spreading this conspiracy theory: Is he intentionally lying to voters? Or is he truly that lazy that he doesn’t do his homework?

Actually, I don't know the answer to Franken's fourth question. I don't recall Grassley ever clarifying how he would have presided over the electoral college count, had Pence been absent. He had told reporters on January 5 that objecting to electoral votes was a "legal process," and he would be "listening to what all of my colleagues have to say during that debate" before deciding how to vote.

I have always given Grassley the benefit of the doubt when reporting on explosive evidence that has emerged during the January 6 investigation: John Eastman's memo, a PowerPoint shown to some Republican senators on January 4, an a December 2020 email from attorney Kenneth Chesebro to Rudy Giuliani.

But it's no surprise Franken (and many others) are skeptical that Grassley was "never approached" by coup plotters who specifically mentioned him in some of their road maps.

Why is it hard for many to believe the senator wasn't in on Trump's scheme? Here are a few reasons; this list could easily be twice as long.

1. Grassley didn't refute Trump's lies about the 2020 election during the weeks leading up to January 6.

2. He didn't condemn Trump's efforts to pressure state officials to change the outcome in his favor, such as his January 2 phone call with Georgia's secretary of state.

3. Grassley didn't denounce plans to reject electoral votes from some Biden states. On the contrary, he indicated on January 5 he hadn't decided how he would vote during the Senate debate over challenged electors.

4. Before and after January 6, Grassley carefully avoided saying that Biden legitimately won every state that awarded its electoral votes to him.

5. In letters to constituents sent in early 2021, Grassley drew false equivalencies between Trump's efforts to stay in power and isolated Democratic complaints following the 2000, 2004, and 2016 presidential elections.

6. Grassley denied mountains of evidence showing Trump had pressured senior Justice Department officials to help him overturn Biden's election victory. Instead, he gave cover for that abuse of power by having the Senate Judiciary Committee's GOP staff make this astounding claim last October: "The available evidence shows that President Trump did what we’d expect a president to do on an issue of this importance: he listened to his senior advisors and followed their advice and recommendations."

7. Also in October 2021, Grassley accepted the former president's endorsement at a Des Moines rally where "The bulk of Trump’s speech was devoted to his baseless claim that the 2020 election was stolen."

8. In a rare moment of truth-telling, Trump said of Grassley at that Des Moines rally, "When I’ve needed him for help he was always there. […] He was with us all the way, every time I needed something."

So spare me the indignation from a campaign spokesperson, who asks why Franken is "spreading this conspiracy theory" and suggests he is "intentionally lying to voters." One American above all others spreads conspiracies and lies: the man who has given Grassley his "Complete and Total Endorsement!"

Top image: Screenshot from Grassley campaign ad that aired in May and June 2022.