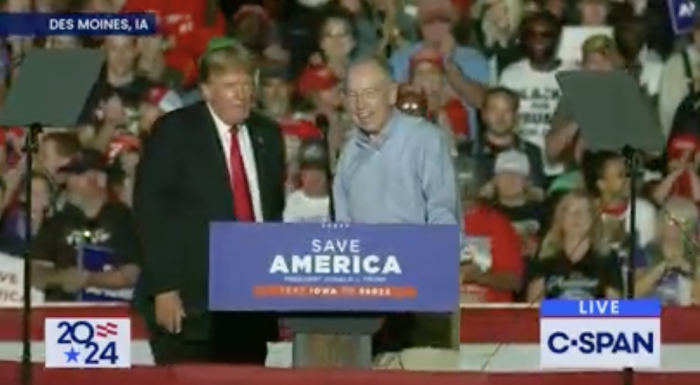 The one truthful thing Donald Trump said in Des Moines

Former President Donald Trump made at least one undeniably accurate statement during his latest lengthy rant filled with lies, xenophobia, and appeals to white grievance.

He was with us all the way, every time I needed something. You know, he's very [persnickety] sometimes, right? He's tough. But when I needed him, he was always there.

Grassley was there for Trump when he kept a U.S. Supreme Court seat vacant for nearly a year, so a Republican president could fill it.

He was there for Trump when he helped spin the firing of FBI Director James Comey, when he ran the White House's talking points at a Senate hearing on Russian election interference, and when he opposed appointing a special prosecutor to investigate the Trump campaign's ties to Russian operatives.

He was there for Trump when he brushed off the president's disclosure of "highly classified information" to Russian officials in the Oval Office. And when he used his Senate Judiciary Committee position to develop "a counter-narrative to the Trump-Russia storyline," leading investigations that "seem designed to minimize the culpability of Trump and his aides [...]."

Grassley was there for the president when he depicted special counsel Robert Mueller's investigation as illegitimate, and dodged questions about Trump aides indicted in that probe, and claimed the real abuse of power was charging former national security adviser Michael Flynn with lying to the FBI.

He was there for Trump when he cheered the attorney general's intervention to reduce the Justice Department's sentencing recommendation for Roger Stone, convicted of "seven felony counts including lying to authorities, obstructing a congressional investigation and witness intimidation."

The self-styled patron saint of whistleblowers was there for Trump when he made excuses for obvious retaliation against witnesses in Trump's first impeachment inquiry. And when he put up only token opposition to the removal of inspectors general at several federal agencies last year. And when he kept his mouth shut as U.S. attorneys were purged.

Grassley was there for the president during the first impeachment trial, blocking efforts to subpoena relevant documents and hear witness testimony. And when he voted to acquit, saying nothing negative about Trump's conduct on the Senate floor (though he did slip some mild criticism into the written record).

He was there for Trump when he refused to say Joe Biden legitimately won every state that delivered its electoral votes to him. And when he feigned genuine concern about "election irregularities." And when he refused to denounce Trump's Big Lie, and suggested that the coup attempt on January 6 was not much different from the handful of objections to electoral college votes in 2001, 2005, and 2017.

He was there for the now-former-president in the second impeachment trial, saying the Senate lacked "the authority to try a private citizen" and House managers failed to prove Trump incited an insurrection.

Grassley was there for Trump when he promoted alternate realities, in which Ukraine (not Russia) interfered in the 2016 presidential election, and Trump did not pressure the Justice Department to help overturn his 2020 loss to Joe Biden.

That last act of service happened just this week.

State Senator Jim Carlin is challenging Grassley in the upcoming Republican primary for U.S. Senate. He's positioning himself as a more pro-Trump Republican than the supposedly "moderate" longtime senator. Carlin has promulgated the Big Lie on the Iowa Senate floor and recently signed a letter demanding phony audits in all 50 states, with a view to reversing Biden's victory.

But those gestures are of no importance compared to the ongoing cover Grassley has provided at every perilous moment during Trump's presidency and beyond.