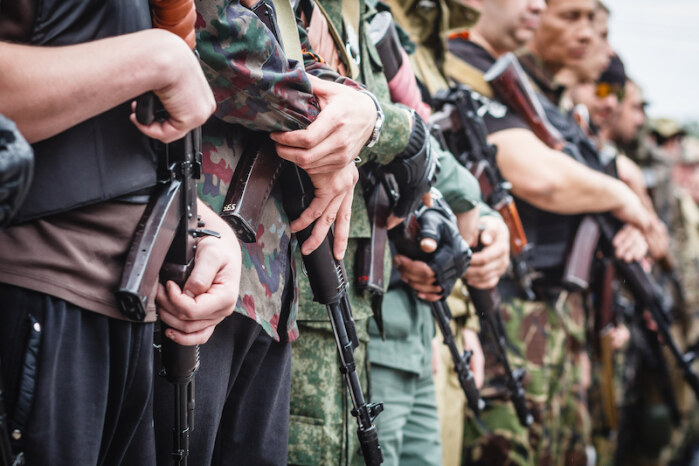 Ira Lacher offers a modest proposal for dealing with the issue of firearms.

In Chicago, a concealed-carry-holder in Chicago shoots a 19-year-old armed with a knife.

In Des Moines, a woman walks into a Hy-Vee, is assaulted by another woman, pulls out a gun and shoots her.

Clearly, we are on to something here.

With every report of a shooting, whether one-on-one or a mass execution, such as Uvalde, the media go ballistic, liberals lament the end of civilization, conservatives offer thoughts and prayers, and Congress does—well, whatever Congress usually does, which is, it doesn't.

But I will admit when I've been wrong. I may have been totally anti-gun in the past, but I consider myself open-minded enough to know that when reality bites, wear thicker clothes.

So I offer this modest proposal for dealing with the issue of firearms:

Consider this proposal akin to how the U.S. and the Soviet Union fought the Cold War, through the policy known as "mutual assured destruction." The great powers averted nuclear holocaust because each knew the other possessed gazillions of thermonuclear missiles capable of ending life on earth, and continually let each other know about it through war games, drills, and military exercises.

Similarly, if each of us knew every one of us were armed, and also knew each other's level of expertise, we'd be foolhardy to risk death by threatening someone with a gun, especially if we weren't rated as highly as our target.

Does everyone get a gun? Well, OK; we can exempt preschoolers. But if Native American children were given weapons by the time they were teenagers, it should be appropriate enough for a 13-year-old to receive a gun at confirmation or bar mitzvah. It is estimated that four in ten Americans—about 72 million of us—already have exercised this requirement.

Those who don't will be required to obtain a gun at what the IRS calls a "qualified life event," such as when we are married or divorced, have a child, change jobs, or move to another state. (Voting, while not a qualified life event, also could be an ownership touchpoint.) Americans who somehow skate through life without arming up at any of those events will be required to when they apply for Medicare or Social Security.

Now, I can hear the screams: "If everyone has a gun, everyone will be in danger of being shot!" Yes, there has always been a fear that someone who hasn't been trained to use a gun, and that's four in ten owners, will fulfill the proverbial adage of shooting themselves in the foot . Or elsewhere: a considerable number of accidental shootings occur in restrooms.

At other times, a gun noob might leave the safety off when loading or unloading a weapon, cleaning it or dealing with a jam. And stories of people shooting themselves with their own weapons while inebriated in bars are legend.

So, we must require training, and not just to prevent accidents. We must include expertise in markspersonship so each of us can demonstrate to others that we are not to be messed with. Training starts from the day you first obtain your gun; young people can learn in Boy Scouts and Girl Scouts, youth sports, and religious organizations. Older Americans can turn to affinity groups such as unions, Rotary clubs, lodges, business groups, and chambers of commerce. The oldest Americans can get training from AARP.

To make sure levels of expertise are regarded universally, I propose establishing a series of colored sashes indicating accomplishment, like belts in karate. These sashes must be worn in all public places. Now, I realize "mandate" has a nasty connotation. But this is far from requiring us to wear masks to prevent you from dying of COVID-19: this is about wearing a sash to prevent you from dying by foolishly challenging someone who can shoot your privates off. Wear a black sash, and you communicate to everyone you're a dead-eye. Ain't no one want to mess with a black sash.

Who will organize and administer this training and verification? I worry that assigning this to private enterprise will leave us with the fractionalization typified by a million different types of digital credit card readers. Fortunately, we already have in place an organization with the expertise to step right in: the National Rifle Association. I propose we nationalize the NRA and draft them into the Department of Homeland Security, or make them a military service such as the Space Force.

Of course, all this has skirted the inevitability that mandatory gun ownership will come from . . . the government. And that immediately will threaten this imperative, because a good portion of the populace is sure to reject any government imperative as a threat to individual freedom.

Given that eventuality, I suppose we might find ourselves in a society where the libertarians who believe arduously in Second Amendment rights but equally arduously in freedom from government oppression, will have to be pro-choice: their guns or their freedom.

Top photo by Denis Kornilov, "Weapons in hands of fighters during a ceremony on June 21, 2014 in Donetsk," available via Shutterstock.