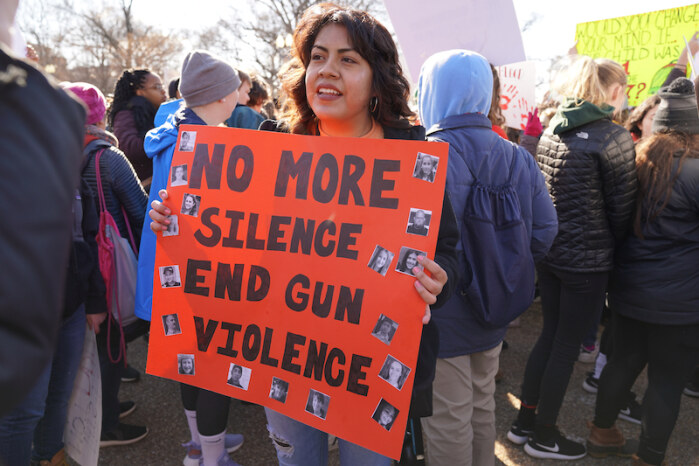 On June 15, as many as a dozen Kansas City area schools shut down summer classes when a generalized threat was posted on Snapchat. A 19-year-old suspect has been charged with making a terrorist threat.

The Kansas City Star's editorial board commented, “If lawmakers won’t do what most Americans want and pass some real, effective and warranted restrictions on gun access, then we are left with drilling children on how to react when a gunman comes into their school.”

That’s just where Governor Kim Reynolds wants Iowa schools to be — battened down, armed, drilled, quivering, guarded, and under desks.

Under Iowa law, teachers are allowed to carry weapons at school. What parent wants to send her kid to a classroom where the teacher is packing heat?

The Des Moines Register's editors recently called for voting against a proposed Iowa constitutional amendment. If enacted, it would make all firearm restrictions subject to “strict scrutiny”—meaning that if any gun regulations were challenged in court, the state would need to prove the law was narrowly tailored to further a compelling government interest. That's a difficult bar to clear.

Iowa voters will have a chance to vote yes or no on this amendment in the 2022 general election. If the majority vote yes, the following language will be added to the state constitution:

The right of an individual to acquire, keep, possess, transport, carry, transfer, and use arms to defend life and liberty and for all other legitimate purposes is fundamental and shall not be infringed upon or denied. Mandatory licensing, registration, or special taxation as a condition of the exercise of this right is prohibited, and any other restriction shall be subject to strict scrutiny.

Under a “strict scrutiny” test, the Register explains, even if the people's elected representatives thoughtfully balance competing interests and arrive at a solution with the aim of saving lives, their efforts could be cast aside for not meeting every prong of the (extreme) judicial test.

Incredibly, Reynolds, a grandma, supports this dangerous amendment. The Register asks voters to reject it. So do I. Get ready for November 8. Tell your friends.

PS: The podcast ”The Weeds” (Vox) recently posted a segment with host Dylan Matthews and co-host Dara Lind, joined by Vox politics reporter Nicole Narea, to talk about gun violence. They discuss the findings of three different research studies related to firearms, which gun control policies are effective, the outcomes of specific violence interventions, and how state legislatures respond to mass shootings. Excellent for those interested in preventing gun violence.

White paper 3: “The Impact of Mass Shootings on Gun Policy”

PPS: Read. It will be on the test‼️ We Need Hope to Combat Violence. That Won’t Arrive Without Action.

Top image: "March for Our Lives” protesters demonstrate outside the White House on March 24, 2018. Photo by Phil Pasquini available via Shutterstock.