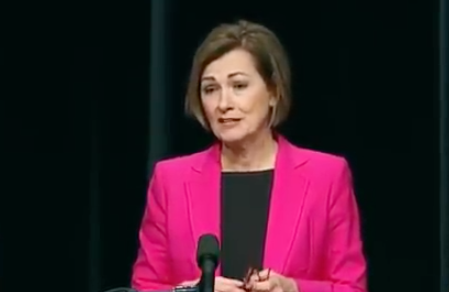 Kim Reynolds bets big on the conservative base

It was certainly a good Friday for Iowans who want to buy handguns but can’t pass a background check.

Although Reynolds had postured as undecided on the permitless carry bill, telling reporters her staff would review the legislation carefully, I didn’t talk to any political insider in either party who had any doubt she would sign it. The only question was when. The answer turned out to be, right before the Easter holiday weekend, when fewer people would notice.

Republican lawmakers helped the governor out, waiting nearly two weeks to send her the gun bills, so she wouldn’t have to sign them while mass shootings in Georgia and Colorado were still dominating the national news. (While the Iowa legislature is in session, the governor must decide within three days whether to sign or veto bills on her desk.)

Making it easier for Iowans to buy guns with no screening or training might seem like a risky political move, given the overwhelming popular support for mandatory background checks and Reynolds’ past claims to support permits. The governor is clearly betting that pleasing the gun lobby–just about the only supporters of this legislation–will pay off in the next election.

The governor’s written statement on signing House File 576 previewed the misleading tropes we will likely hear from her campaign next year.

“Today I signed legislation that protects the 2nd Amendment rights of Iowa’s law-abiding citizens while still preventing the sale of firearms to criminals and other dangerous individuals. This law also takes greater steps to inform law enforcement about an individual’s mental illness helping ensure firearms don’t end up in the wrong hands. We will never be able to outlaw or prevent every single bad actor from getting a gun, but what we can do is ensure law-abiding citizens have full access to their constitutional rights while keeping Iowans safe.”

As Bleeding Heartland discussed in more detail here and here, “criminals and other dangerous individuals” will have little trouble buying firearms under the new law. By not obtaining a permit, they will avoid the background checks Iowa sheriffs currently conduct. They won’t need to show they are permitted to possess firearms before buying from private sellers or at gun shows. They won’t need to complete even the most basic online training course on gun safety.

I don’t know what Reynolds means by “greater steps to inform law enforcement about an individual’s mental illness.” (The governor’s spokesperson didn’t respond to an April 2 email seeking clarification.) One part of the bill requires informing the Iowa Department of Public Safety about court orders finding a person ineligible to acquire a pistol or revolver, and calls for the state agency to forward that information to the FBI for inclusion in the national background check system database.

But that won’t “ensure firearms don’t end up in the wrong hands,” because people found incapable of safely possessing firearms can simply turn to a private seller. The Iowa Police Chief Association registered against this bill, and not one law enforcement group lobbied for it.

“By full background check I mean… the check that is done by the sheriff’s department for the permit to purchase and the permit to carry that has a mental-health background screening that they have to investigate, where the FBI regular NICS check does not,” Young said.

Reynolds admitted on April 2 that this law won’t “prevent every single bad actor from getting a gun.” Nevertheless, she insisted, “what we can do is ensure law-abiding citizens have full access to their constitutional rights while keeping Iowans safe.” Which Iowans will be safe? Not people at serious risk of harming themselves. Research has shown that “Ready access to a gun is a major risk factor for suicide.”

Also less safe: Iowans who might be targeted by gun owners with criminal records or a history of domestic violence (a common factor in mass shootings). When the Iowa Senate debated this bill, Democratic State Senator Zach Wahls pointed out that Iowa’s permitting system blocked 14,921 illegal gun sales between 1998 and 2019. Such purchases will be able to proceed after July 1. As long as prohibited people don’t attempt to buy weapons through federally licensed gun dealers, no background check will turn up any red flag.

Should Reynolds be worried about making it easier for dangerous people to acquire and carry handguns? The National Rifle Association and its Iowa affiliate were thrilled by today’s news. Those groups were already going to be heavily engaged in the 2022 election, when Iowa voters will consider a state constitutional amendment banning almost any regulation of guns. Reynolds just guaranteed that the gun lobby will mobilize support for her as well.

In any event, Republicans have a structural advantage in Iowa midterms. Just look at the turnout rates by partisan affiliation for Iowa’s last five general elections in non-presidential years. 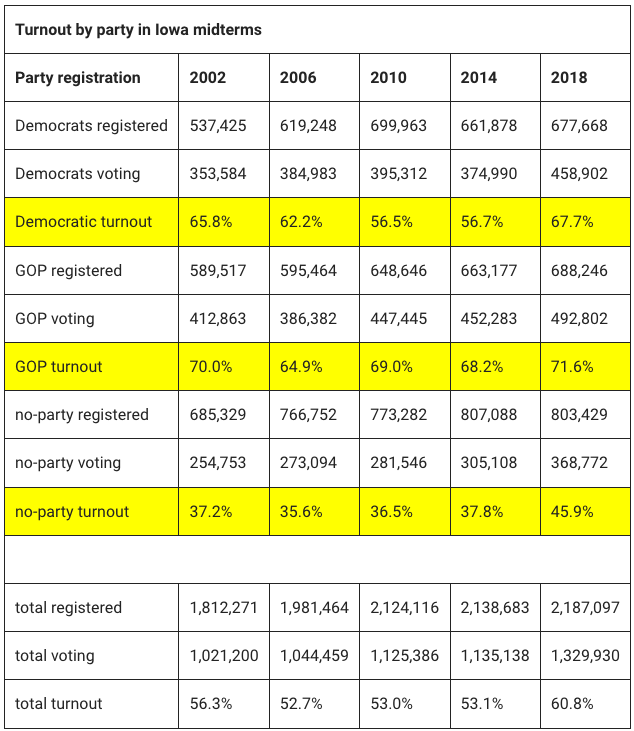 Even though Democratic and no-party turnout increased substantially in 2018, Republican turnout was still higher, both in absolute votes cast and as a percentage of Iowans registered. That GOP turnout secured Reynolds’ victory over Fred Hubbell, who gained more votes than most Iowans who have been elected governor.

So I doubt Reynolds will lose any sleep over the bills she signed on this Good Friday.

Top image: Screenshot taken near the end of Governor Kim Reynolds’ televised news conference on March 31, when she answered a question about the pro-gun bill.