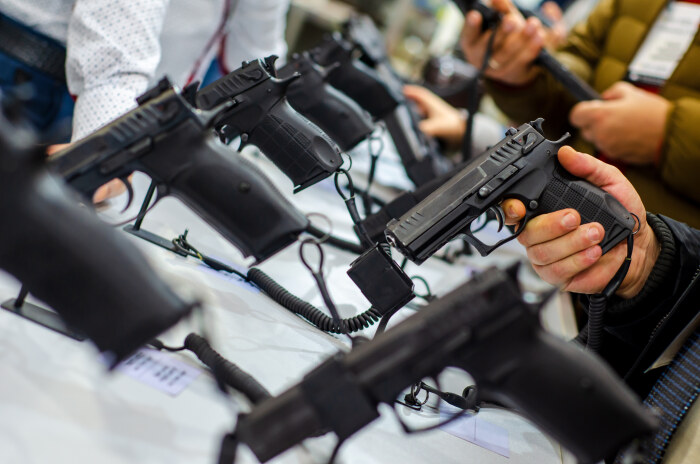 Any day now, Governor Kim Reynolds is expected to sign the latest pro-gun bill to reach her desk. The most controversial provisions in House File 756 eliminate permit requirements for Iowans who want to purchase or carry pistols or revolvers. Since a background check is part of the current process for obtaining a permit to carry concealed weapons, gun safety advocates have warned the bill would make it easy for Iowans who can't pass a background check to buy handguns.

Iowa House Speaker Pat Grassley put it this way on the latest episode of the Iowa PBS program "Iowa Press."

I think it's very important for us to remind you, before this bill is signed into law, currently you can get a permit for five years and in that five year period you don't have to have any sort of background check or anything. But this making it optional I really believe will increase the amount of background checks that are going to happen because now if I walk in and I choose not to have the permit, every time I go in to a dealer, wherever that would be, I'm going to have to fill out that same background check.

This bill DOES NOT eliminate background checks as many are being mislead to beleive and there are still restrictions as to where you can carry as a citizen. This bill is actually likely to increase the amount and frequency of back ground checks on gun purchases. If you continue to carry your five-year permit in the state, one background check is suffecient (and upon every renewal of the permit), if you choose not to carry a permit (constitutional carry), you will have a background check with every gun purchase you make at store or gun shop.

Similarly, State Representative Garrett Gobble has been telling constituents House File 756 "does not make background checks optional," claiming, "Whether you have a permit or not, you will be subject to the federal background check system (NICS)."

It's not surprising Republicans want Iowans to believe they didn't undermine the background check process. Surveys in Iowa and nationally show large majorities--often more than 80 percent of those polled--favor requiring background checks for all gun purchases.

But the GOP claims about this bill don't withstand scrutiny.

First, only sales at federally licensed gun dealers would involve a mandatory background check if House File 756 becomes law. Private sellers at gun shows or any other location would no longer need to confirm the buyer has a permit to possess a handgun. Any unlicensed seller would need only to have a "reasonable" belief the buyer was not prohibited from owning the weapon.

A fact sheet prepared by Everytown for Gun Safety, enclosed in full at the end of this post, explains that anyone could be an private seller--an acquaintance of the buyer, or a stranger. "Iowa’s current permit requirement - which applies to both licensed and unlicensed handgun sales - regularly stops felons, domestic abusers, and other prohibited people who attempt to buy handguns from obtaining them only because they are stopped by a background check."

While many Iowans would continue to buy firearms through federally licensed dealers, those who couldn't pass a background check would have new incentives to buy on the unlicensed market. Everytown's fact check noted,

An investigation into Armslist.com -- the largest online gun marketplace -- found that nearly 1 in 9 prospective buyers who respond to ads from unlicensed sellers would not pass a background check, a rate seven times higher than the denial rate in other contexts where background checks are required.

Amber Gustafson has pointed out that no state has seen an increase in background checks after enacting a permitless carry law.

To purchase and carry a handgun in Iowa today, you need a permit from a local sheriff’s office, which would run a background check and — if your record clears — issue you a five-year permit. But if the proposal currently in place becomes law, those background checks could fall on gun dealers.

The change would mean Young would have to make the call to the FBI to conduct the background check himself. He said that would only cost him five minutes of time, but that he would prefer the sheriff’s departments continue to do the full background checks.

“By full background check I mean... the check that is done by the sheriff’s department for the permit to purchase and the permit to carry that has a mental-health background screening that they have to investigate, where the FBI regular NICS check does not,” Young said.

That is probably why then State Representative Jeff Kaufmann mocked a permitless carry proposal as the "crazy, give-a-handgun-to-a-schizophrenic bill" when the Iowa House considered similar legislation in 2011.

House File 756 passed on a straight party-line vote in the Iowa Senate and mostly along party lines in the House, where State Representative Wes Breckenridge was the lone Democrat to vote yes. In both chambers, Republicans voted down Democratic amendments that would have required background checks for all Iowa handgun purchases.

Amber Gustafson laid out other concerns in her recent post on why Reynolds should veto this bill.

Appendix: Everytown for Gun Safety's fact check of claims made by proponents of House File 756 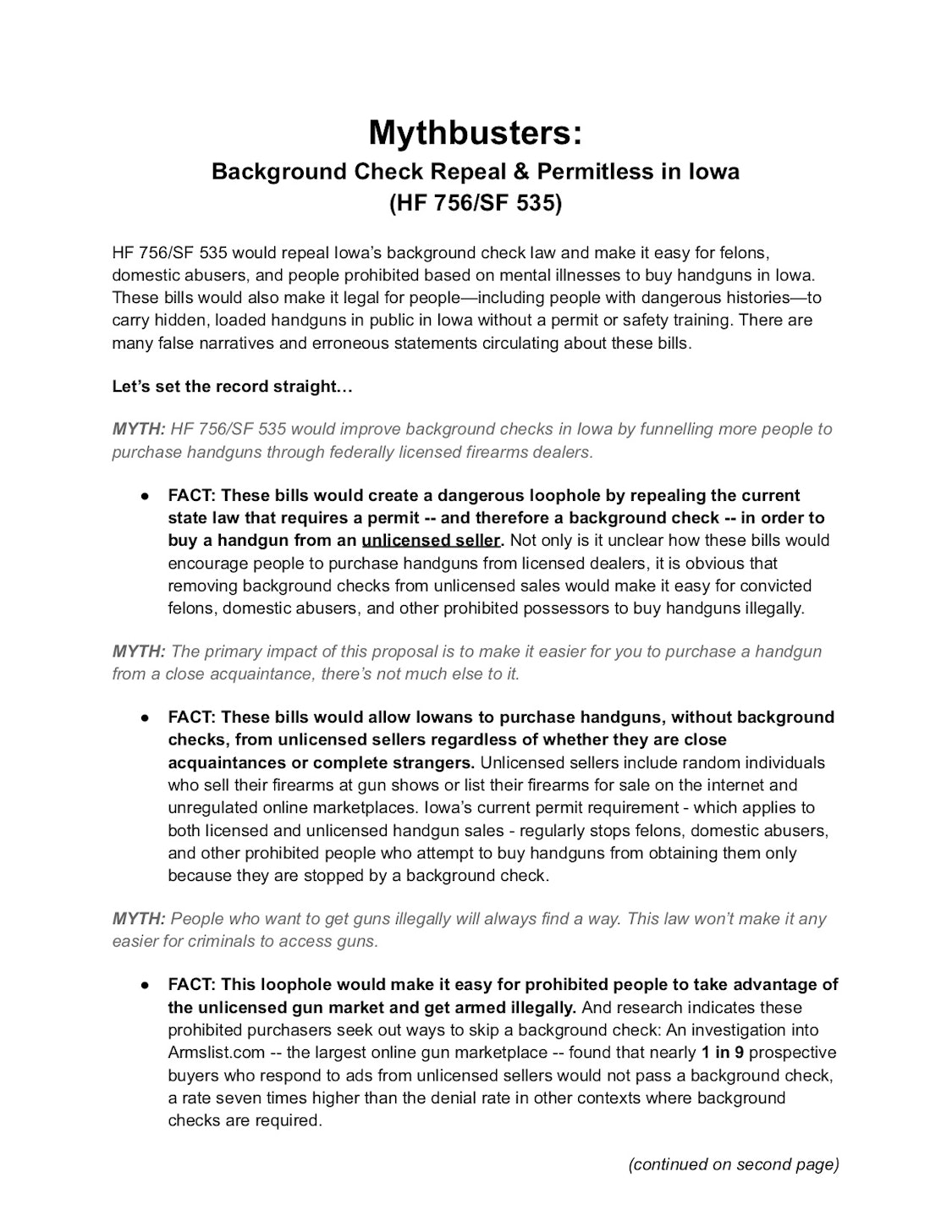 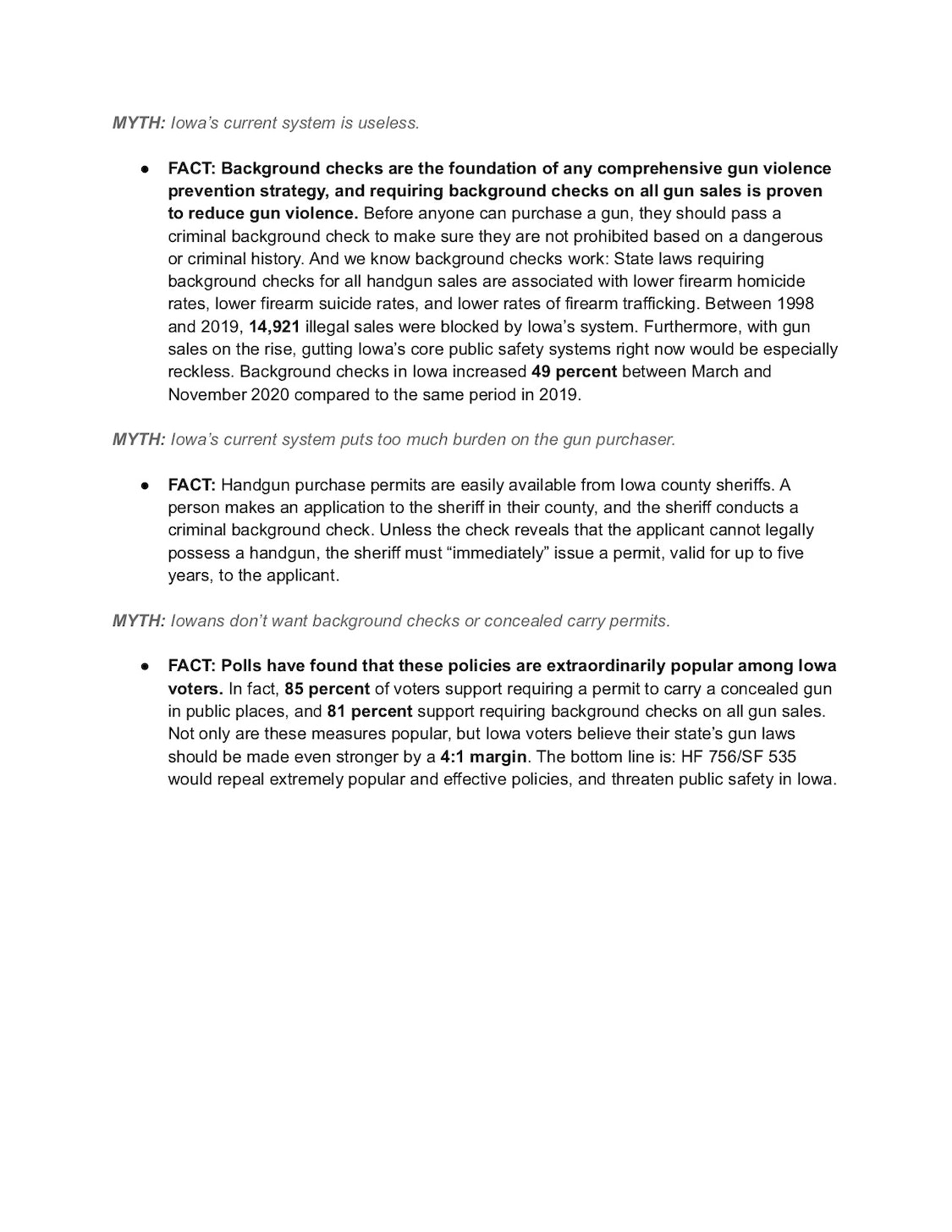 Top image: Photo of pistols for sale by Oleksandr Lutsenko, available via Shutterstock.