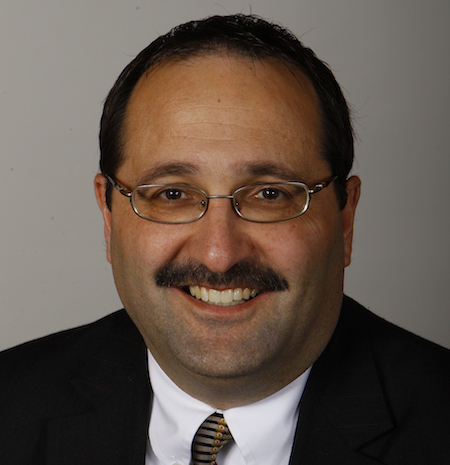 During a pause in a contentious floor debate over a bill stripping public employees of collective bargaining rights, Kaufmann was caught on a live mic, bantering with then House majority whip Erik Helland and assistant majority leader Steve Lukan. Two days earlier, Helland had chaired a subcommittee meeting on a proposal commonly known as the "Alaska bill" because that state was the first to abandon mandatory concealed carry permits.

After Helland joked that he was going to be stuck running the collective bargaining bill, Kaufmann speculated that maybe Helland would get out of moving the Alaska bill. Lukan asked, "what's the Alaska bill?", to which Kaufmann replied, "The crazy, give-a-handgun-to-a-schizophrenic bill."

At that point, someone warned the Republican lawmakers, "This microphone is live," and the feed went dead. The Des Moines Register published the video, and the Iowa Democratic Party posted it on YouTube.

Kaufmann apologized the next day for what he called a "poorly worded joke," saying he was pointing out "what some people have said about the bill." He added, "I think in terms of what the bill does or doesn't do, I think it's an issue that we need to talk about." That was an apparent reference to how the proposal would make it easier for unstable people to obtain handguns, without any background check.

The Des Moines Register's Jason Clayworth quoted advocates for people with serious brain disorders who said Kaufmann's comments had promoted misconceptions about mental illness. Kaufman said he was sensitive to those issues and mentioned that his grandmother suffered from what might have been schizophrenia. He went on: "I think the comment, although poorly worded, actually showed some sensitivity that people with mental health, that we need to take that into account in any bill we have."

Gun safety advocates have pointed out that the bill Republicans approved this year, like the one Kaufmann called "crazy" ten years ago, "would allow private handgun sales to proceed without that permit or its requisite background check and safety training, creating a loophole through which convicted felons, domestic abusers, and those adjudicated mentally ill would be able to buy guns and use them the same day."

The permitless carry bill didn't advance in 2011; Helland cut short the subcommittee meeting on the legislation without a vote, after noticing a Democratic staffer was recording the discussion. A similar bill introduced in 2014 was not even assigned to a House Judiciary subcommittee, indicating that GOP leadership didn't back the measure. Advocates' efforts to force a floor vote on what they call "constitutional carry" failed.

After each election, more Iowa Republican lawmakers signed on to this piece of the gun lobby's wish list. By 2018 and 2019, half the GOP state Senate caucus co-sponsored a bill similar to what Reynolds is considering now: no permit required to carry firearms, and many Iowans would be able to bring guns onto school grounds.

State Senator Jason Schultz (a longtime supporter of the idea) chaired the subcommittees that considered the 2018 and 2019 bills. The proposal didn't clear the full Judiciary Committee. However, Stephen Gruber-Miller reported for the Des Moines Register two years ago that Schultz said the permitless carry concept "becomes more normalized each time it comes up."

Indeed, this concept--considered too toxic for many Republican legislators only a few years ago--passed the Iowa House and Senate this month without a single dissenting GOP vote. Schultz floor managed the bill in the upper chamber.

We will soon see whether Reynolds has changed her mind since she endorsed Iowa's current system of permits and background checks in 2018 and 2019. While the governor has said she is carefully considering the bill, I share the view David Yepsen voiced on the most recent edition of "Iowa Press": it's "hard to believe" a Republican legislature would send a high-profile bill to the governor "without getting some okay, some signoff from her that yeah, this is fine, send it on down."