U.S. Senator Joni Ernst was among fifteen Republicans who joined the entire Democratic caucus on June 23 to advance a package designed to reduce gun violence.

Neither Ernst nor Grassley has released a statement on today's vote or mentioned it on their social media feeds.

The "boyfriend loophole" was one of the most contentious issues in the years-long battle over the Violence Against Women Act. Ernst was a central figure in those negotiations and in 2019 was unwilling to go against the gun lobby on the boyfriend loophole language. This year, Jennifer Bendery reported for the Huffington Post that Ernst unsuccessfully advocated for including the provision in the Violence Against Women Act reauthorization, which finally passed in March.

Grassley and Ernst were not involved in negotiating the new gun package and said earlier this month they would wait for specifics before deciding how to vote. But in a campaign fundraising appeal sent to thousands of Iowans after the June 7 primary (enclosed below), Grassley said, "I WILL NOT BUDGE ON OUR GUN RIGHTS—AND THEY KNOW IT!" He added that he has "never wavered on our God-given right to self-defense against the liberals' gun-grabbing agenda."

A final Senate vote to approve the bill is expected sometime by the evening of June 24. Most of the senators who supported the cloture motion will vote for final passage, but some may oppose the substance of the bill after allowing debate to end. UPDATE: On the evening of June 23, both Ernst and Grassley voted for a GOP effort to table the gun bill. But when the Senate passed the bill by 65 votes to 33 a few minutes later, Ernst was one of the fifteen Republicans who voted yes.

Ernst bashed the "radical Left" in a news release explaining her vote.

“As a lifelong supporter of the Second Amendment, proud gun owner, and combat veteran, I’m adamantly opposed to any infringement on our Constitutional Rights. This bill does not take away the rights of any law-abiding American. Every American wants to keep our kids and our schools safe and provide folks access to mental health treatment, and this proposal helps do that without placing new restrictions on law-abiding gun owners. I have been disgusted by the radical Left’s longstanding attempts to exploit horrific tragedies to pursue their partisan agenda, pushing a false narrative that the only way to stop murderers is to infringe on law-abiding citizens’ rights. They are wrong, and this bill shows that.”

Senate Minority Leader Mitch McConnell has opposed most gun safety legislation but voted to advance what he called "a common-sense package," because "Its provisions are very, very popular. It contains zero, zero new restrictions, zero new waiting periods, zero mandates and zero bans of any kind for law-abiding gun owners.”

McConnell’s support came despite the opposition of prominent gun rights groups, including the National Rifle Association, which said this week that the bill “does little to truly address violent crime while opening the door to unnecessary burdens on the exercise of Second Amendment freedom by law-abiding gun owners.” [...]

The conservative Wall Street Journal editorial board endorsed the legislation Thursday, as did the National Sheriffs’ Association, which has close ties to GOP leaders.

House Speaker Nancy Pelosi has indicated that she will move the legislation quickly through the lower chamber of Congress. President Joe Biden has praised the package and said in a June 23 statement, "Our kids in schools and our communities will be safer because of this legislation. I call on Congress to finish the job and get this bill to my desk."

UPDATE: During a June 22 conference call with some Iowa reporters, Grassley explained why he had voted against a procedural motion to begin debate on the bill. Sarah Watson reported for the Quad-City Times,

Grassley said he thought the definition of a dating relationship in the bill was "too vague."

The bill defines "dating relationship" as a "relationship between two individuals who have or have recently had a continuing serious relationship of a romantic or intimate nature."

The bill also clarifies that "A casual acquaintanceship or ordinary fraternization in a business or social context does not constitute a dating relationship."

"I'm trying to get the best legal advice on it, but so far, it seems to me the text is pretty vague to be enforced in the definition of what a dating relationship is," Grassley said. "And then in regard to due process, respondents in courts won't be able to determine who's subject to law. Since these definitions are vague, and I think that needs to be clarified."

SECOND UPDATE: The House approved this bill on June 24 by 234 votes to 193 (roll call). Although fourteen Republicans joined all Democrats to sent the package to Biden's desk, Iowa's delegation split along the expected party lines. Democrat Cindy Axne voted for the bill, while Republicans Ashley Hinson, Mariannette Miller-Meeks, and Randy Feenstra opposed it.

Appendix: Front and back pages of a fundraising letter Senator Chuck Grassley's campaign mailed in June 2022 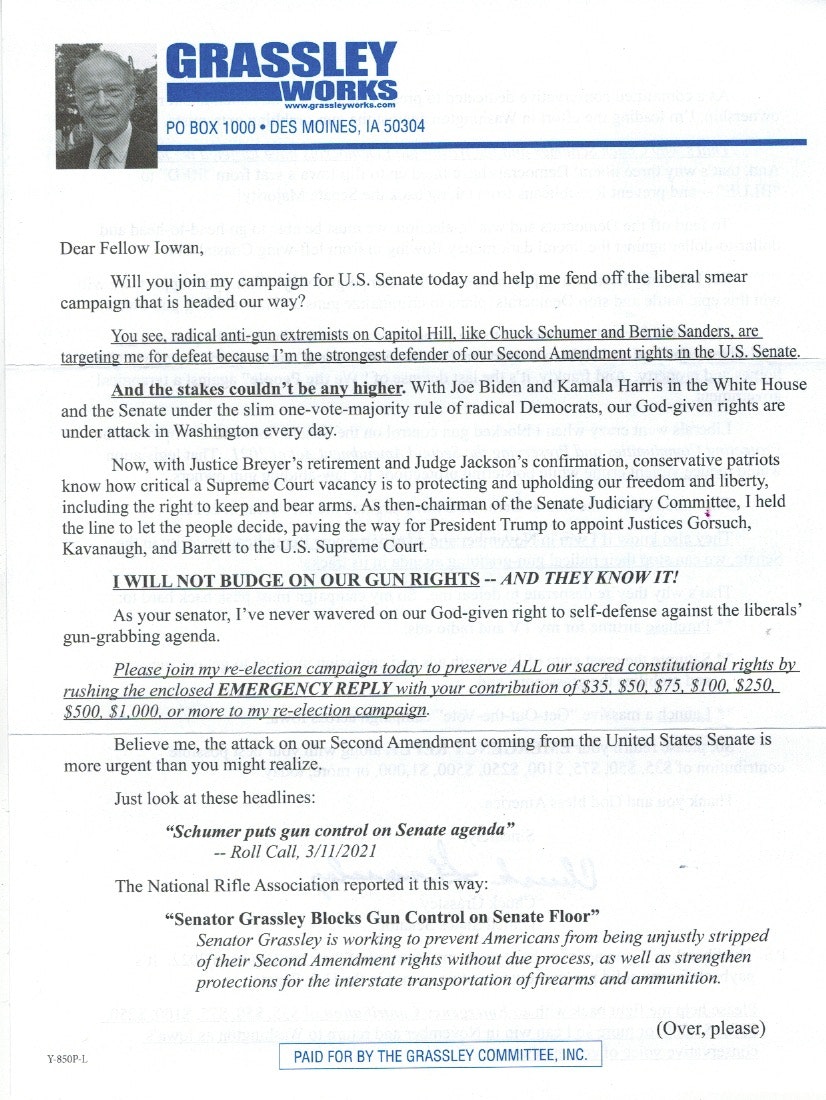 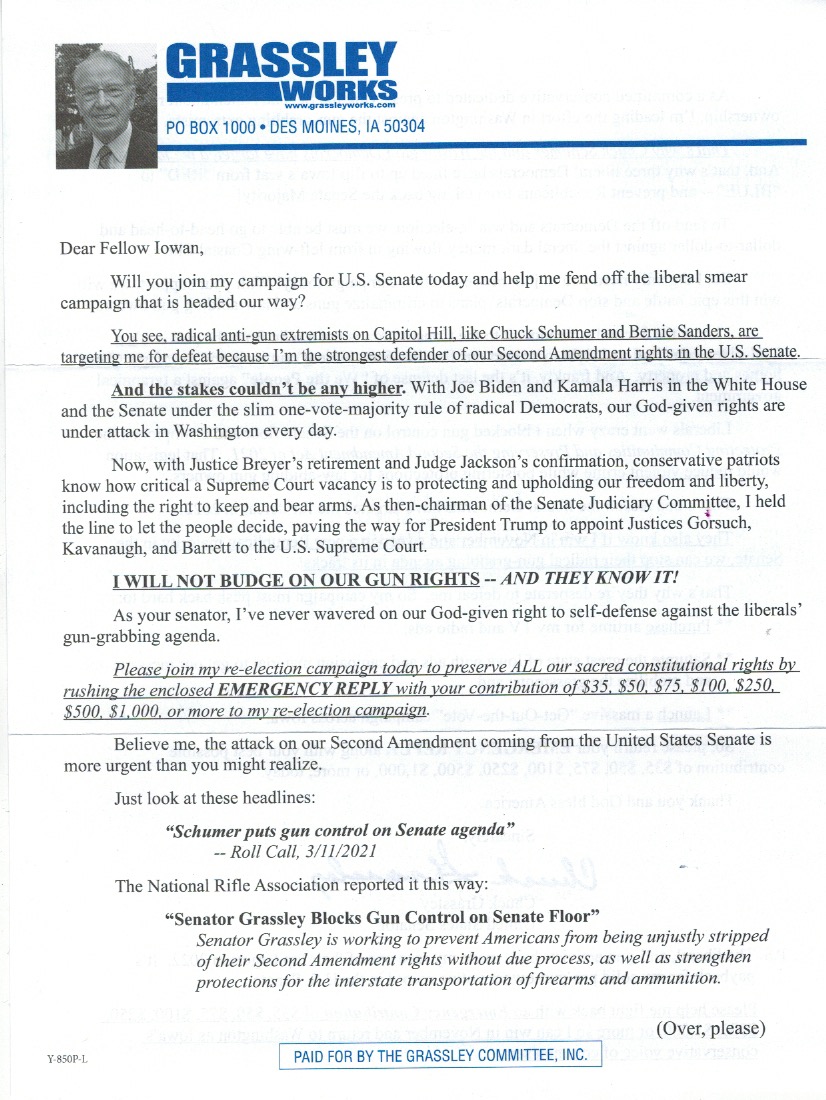 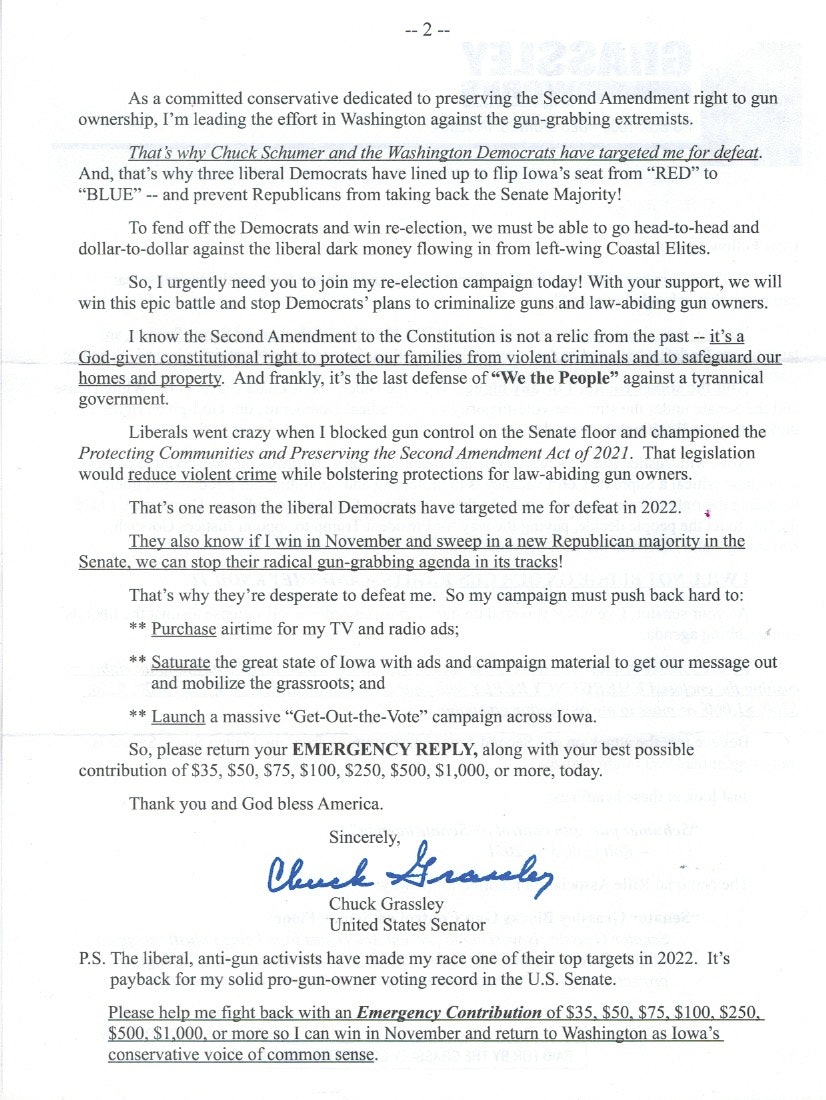 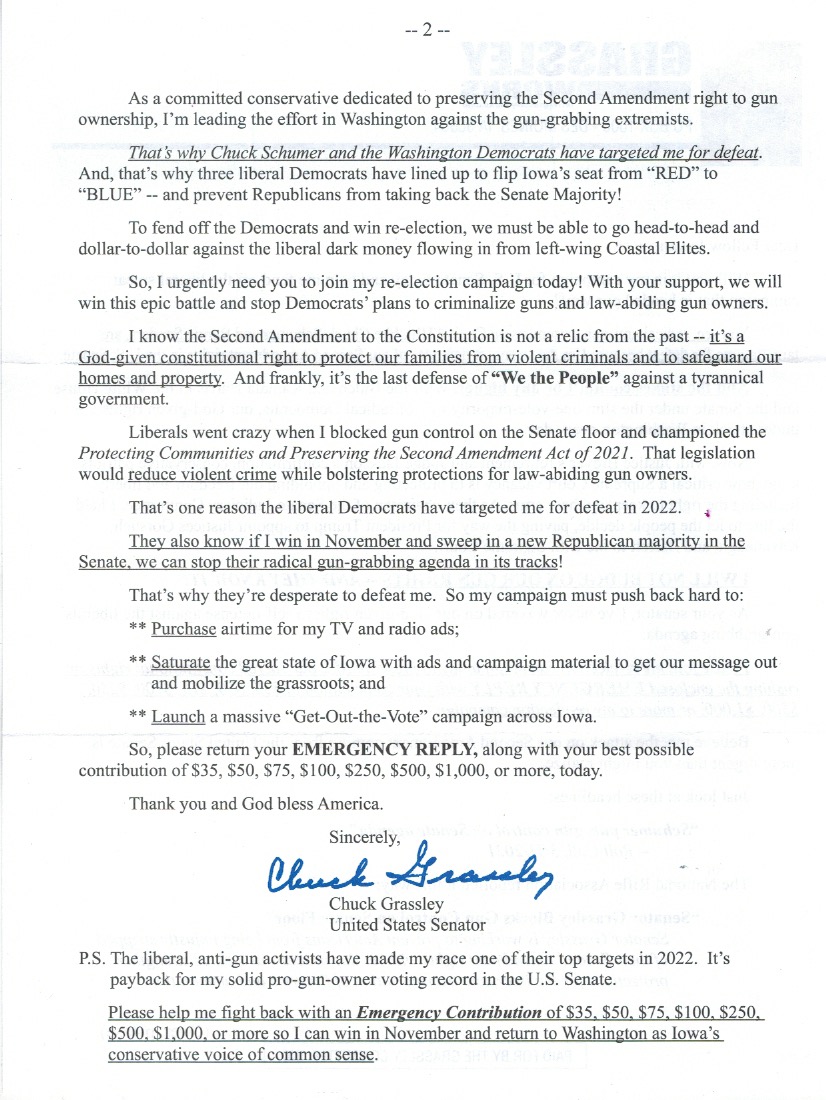