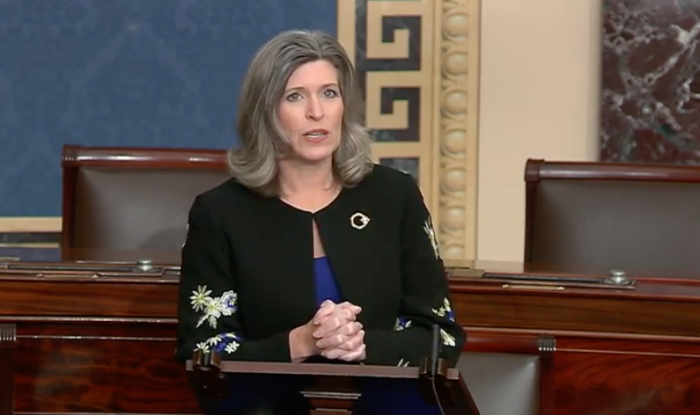 Months of work on reauthorizing the Violence Against Women Act, which lapsed in February, "came to a screeching halt" this week, U.S. Senator Joni Ernst announced on the Senate floor on November 7.

For 25 years, that federal law has supported "criminal justice and community-based responses to domestic violence, dating violence, sexual assault and stalking in the United States." Congress has reauthorized it three times, each time with improvements. By Ernst's telling, "Democrats are putting politics ahead of people," rejecting a bipartisan approach to revive the law in favor of "non-starter" legislation the U.S. House approved in April.

Some salient facts were missing from Ernst's narrative. The House bill to reauthorize the Violence Against Women Act was bipartisan: 33 Republicans voted for it.

Here's the full video of Ernst's November 7 Senate floor speech about the issue.

Her office released a transcript, which began reasonably enough.

“One of my top priorities has been to reauthorize and modernize the Violence Against Women Act.

“A survivor myself, I recognize that VAWA provides the right resources to tackle head-on domestic violence and sexual abuse in our communities – in Iowa and throughout the United States.

Ernst has consistently said this bill was among her priorities for 2019, her first year as a member of the Judiciary Committee. Back to her speech on Thursday:

“My good friend and colleague, Dianne Feinstein, Ranking Member on the Judiciary Committee, agreed to work with me on this important topic.

“For months, Senator Feinstein and I, and our staffs, have worked closely and in good faith with one another with this shared goal in mind. We’ve met numerous times, held discussions, and negotiated in a way that has produced real progress.

“But, just this week, after months of work and mountains of effort toward a bipartisan bill, it all came to a screeching halt.

“Once again, the Democrats are putting politics ahead of people – and have decided to move forward on the House-passed VAWA bill. The House bill is a non-starter and is chalk full of partisan political talking points that take us further away from, rather than closer to, a bill we can get over the finish line.

Again, the House bill attracted 33 Republican votes. Ernst didn't give any examples of "partisan political talking points." Most of the GOP caucus voted against the bill because of a new provision that bothered the NRA. From Sheryl Gay Stolberg's report for the New York Times in April:

The measure closes the so-called boyfriend loophole by barring those convicted of abusing, assaulting or stalking a dating partner or those subject to a court restraining order from buying or owning firearms.

Jennifer Baker, a spokeswoman for the N.R.A., said that for “many of those ‘offenses’ — and I’m using air quotes here — the behavior that would qualify as a stalking offense is often not violent or threatening; it involves no personal contact whatsoever.” She argues that the new provision is “too broad and ripe for abuse.”

If the House bill is a non-starter, it's only because the NRA has a stranglehold on what Senate Republicans will consider. Like most of their GOP colleagues, Ernst and Iowa's senior Senator Chuck Grassley have voted repeatedly against gun regulations that most Americans favor.

Ernst is among the Senate's top ten recipients of NRA funds. The country's most powerful gun advocacy group has spent more than $3 million to boost her political career, including about $1.9 million against Bruce Braley, her 2014 opponent.

Back to Ernst's November 7 speech.

“Mr. President—I’m all too aware of how this town works. Election year politics are in full swing. And the grim reality is Democrats cannot afford to be seen giving Republicans a win. The far left agenda of the House has hijacked the process.

“It sounds petty. And it sounds unbelievable. But, folks, that’s the reality.

“You would think that supporting survivors and preventing abuse would be placed ahead of petty politics.

Why is it "petty" to insist on preventing abuse by stalkers and current or former dating partners? Research compiled by the Giffords Law Center shows that "Firearm access helps to fuel domestic violence."

Back to Ernst on the Senate floor.

“I want to be clear: I remain hopeful that we can continue to work in a bipartisan way and get this law reauthorized.

“Soon, I plan to respond with a good faith proposal of my own. This bill will support survivors and hold abusers accountable. It’s also a bill that I believe can pass the Senate and get the President’s signature. I invite my colleagues across the aisle to join me in this very, very, important effort.

Nothing says commitment to bipartisanship like a press release titled, "Ernst Calls Out Democrats on Senate Floor for Putting Politics Before Sexual Assault and Domestic Abuse Survivors."

Ernst's staff rarely reply to my e-mail inquiries and have never allowed me to ask a question on her conference calls with Iowa reporters. Journalists with access should seek to clarify the senator's position on this issue. A few places to start:

1. What specifically is wrong with the House bill? If it's too partisan, why did 33 Republicans vote for it?

2. Will the senator run her bill by NRA leaders or lobbyists before releasing the draft to the public?

3. Is NRA approval a precondition of Ernst's support for any version of the Violence Against Women Act? (She and Grassley have sometimes sought cover by voting for watered-down GOP alternatives to gun legislation the NRA opposed, such as universal background checks.)

4. Does she agree in principle that stalkers and current or former partners who have committed domestic abuse should lose their right to possess firearms? If not, why not? According to peer-reviewed research cited by the Giffords Law Center, "More than half of all intimate partner homicides are committed by dating partners."

5. If evidence of domestic abuse is compelling enough for a court to issue a restraining order, shouldn't those subject to such orders forfeit their right to own or buy guns? If not, why not? A separate peer-reviewed study found "states that restrict access to guns by abusers subject to domestic violence restraining orders have seen a 13% reduction in firearm intimate partner homicides."

UPDATE: In response to Bleeding Heartland's inquiry, the Iowa Coalition Against Domestic Violence provided this statement on why the organization supports the House-approved bill. (emphasis in original)

The Violence Against Women Act (VAWA) is at the heart of our nation’s response to domestic violence, sexual assault, human trafficking and stalking. VAWA supports comprehensive, effective, and cost-saving responses to these crimes. Importantly, VAWA gives states and communities tools to help victims based on local and statewide needs and priorities. We support the bi-partisan House-passed VAWA reauthorization bill (HR 1585) because it reflects the needs of victim service programs like ours to assist survivors.

Each VAWA reauthorization bill provides an opportunity to improve our nation’s response. We support a strong VAWA reauthorization with key improvements. We strongly oppose any rollbacks of protections gained in previous VAWA reauthorizations. Changes to VAWA should expand access to, and eliminate barriers to, justice, safety and services. Key things important to Iowa service providers include:

Economic security: Financial abuse is behavior that controls a person’s ability to acquire, use or maintain economic resources and occurs in virtually every case of domestic violence. It remains one of the most powerful methods of keeping a person trapped in the relationship because violent partners are acutely aware of the link between a victim’s financial independence and her access to safety. Survivors face discrimination in employment and often need time off to address domestic violence, and we urge the VAWA reauthorization bill to enhance these protections.

Ensure Access/Non-discrimination to VAWA services: Ensure compliance with VAWA non-discrimination requirements and guarantee equal access to VAWA protections for all victims regardless of gender.

Increase Avenues for Justice: Allow communities to implement alternative justice responses that are focused on victim autonomy, agency and safety in order to provide resolution and restitution for victims.

Tribal jurisdictions: We support expanding the Tribal Special Assistant U.S. Attorneys Program that would enable tribal prosecutors to pursue DV-related crimes such as sexual assault, child abuse and trafficking on tribal lands. Currently the definition is limited to DV-specific crimes.

Homicide reduction: Iowa has a proud history of protecting domestic abuse victims from gun violence, requiring background checks for all handgun sales and enacting legislation in 2010 to ensure individuals convicted of domestic abuse surrender firearms. American women are as likely to be killed by dating partners as by spouses, and that is why we urge the Senate bill to maintain the provisions in the House-passed bill that closed the boyfriend loophole.