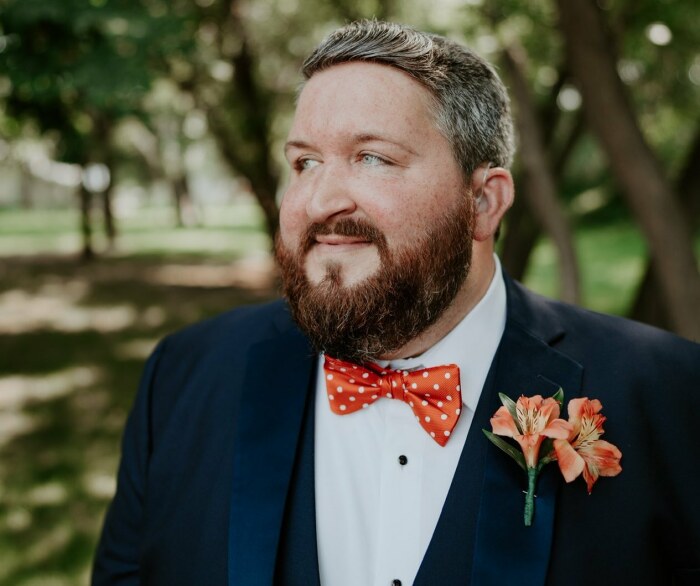 Republicans want to kill us. Democrats need to talk about it

When my husband and I walk into a restaurant in rural Iowa and sit down, nobody assumes there’s something going on between us. I’m a heavyset, cisgender white guy with a beard. More than once, people have assumed we were brothers or–to my chagrin–that I was his father (only six years separate us, by the way, but at 32, I’m blessed by genetics with salt-and-pepper hair).

Because of this dynamic, I know that I enjoy an immense amount of privilege to be able to live authentically and thrive in rural western Iowa. I know this, too, from listening to the experiences of Black, brown, transgender, and non-binary folks, who tell me how they fear for their safety when they visit my part of Iowa (we’re not yet two years removed from having been represented by Steve King). Their experiences are valid, and none of us is safe while any of our lives are threatened.

As chair of the Iowa Democratic Party’s Stonewall Caucus, a constituency group of LGBTQ+ folks who guide the party’s positions on issues that affect our community, my job is to elect Democrats–specifically, Democrats who support LGBTQ+ people and act as allies in our continued fight for equality and justice.

As evidenced by our platform, approved by Democrats in 2020 at the Democratic National Convention, the Democratic Party is the party that supports the rights of LGBTQ+ people, including transgender folks, to live free from discrimination and danger. No-brainer, right?

Imagine my surprise when I opened my Twitter feed to find our party’s 2016 nominee for president pooh-poohing the gall of transgender Americans’ existence in the name of "winning." From an interview Hillary Clinton gave to Edward Luce of the Financial Times earlier this month:

“My espresso has arrived. Clinton asks for more iced tea. I cannot allow the lunch to end without questioning the direction of her party. I say that Democrats seem to be going out of their way to lose elections by elevating activist causes, notably the transgender debate, which are relevant only to a small minority. What sense does it make to depict JK Rowling as a fascist?

To my surprise, Clinton shares the premise of my question. “We are standing on the precipice of losing our democracy, and everything that everybody else cares about then goes out the window,” she says. “Look, the most important thing is to win the next election. The alternative is so frightening that whatever does not help you win should not be a priority.”

There’s a lot to unpack here.

Mrs. Clinton’s message seems cut-and-dried. Sure, Republicans want us all dead. Let’s not talk about that. The cycle is always the same: right-wingers imagine an issue, media pick it up and run with it, and Democrats ignore it and cede ground in the political arena. Don’t believe me? I’ve got a kitty litter box for you to clean at a school near you.

LGBTQ+ people are neither a debate to be had, nor are we political currency to be spent or tucked into a bedside table. Not sure if anyone noticed, but police in Idaho just arrested a group of white supremacists who planned to incite violence at a pride festival last week. Trans women of color have borne the brunt of violent attacks against LGBTQ+ people in this country since the beginning. And pastors in Idaho and Texas openly called for the execution of LGBTQ+ people earlier this month.

Trans women are women. So, if you don’t mean all women when you say “human rights are women’s rights, and women’s rights are human rights, once and for all”, I don’t know what the hell you’re talking about. If you want to be an ally, ditch the performative nonsense and push back against the hateful garbage.

In stark contrast to Secretary Clinton’s admonishment that trans people and their allies should sit down and shut up, Iowa’s Democratic nominee in the fourth congressional district, Ryan Melton, didn’t mince words when he boldly devoted the entirety of his allotted five minutes in front of our state convention last weekend to call for bold support of LGBTQ+ people. In a rousing and emotional appeal for solidarity, he brought the crowd to its feet for a prolonged standing ovation. That moment made me proud to be a Democrat. Like many other queer activists, I am tired, but Mr. Melton’s courage gave me fuel to keep going.

One has to wonder where that courage will be found in milquetoast, consultant-driven campaigns in the very few toss-up U.S. House districts across the country this year. What’s increasingly clear is that losing rights is a powerful thing, and LGBTQ+ people are one hell of a voting bloc. Quite simply, the Democratic Party cannot win without us.

While the dismissive tone from some national Democratic leaders have set off alarm bells for activists like me, Democrats in Iowa haven’t gotten it all wrong: earlier this month, we nominated a record number of out, queer candidates and people of color for state and local offices, including Elle Wyant, who has the chance to break new ground as the first openly-trans person elected to the Iowa House this fall; Representative Liz Bennett, who will be the first out LGBTQ+ woman to serve in the Iowa Senate; and V Fixmer-Oraiz, who will be the first out nonbinary/trans county supervisor in Iowa history.

Most Democratic candidates in Iowa and across America are wonderful people, devoted to public service and making life better for LGBTQ+ people. But in 2022, your faded equal-sign bumper sticker just won’t cut it. Love is love must give way to a serious reckoning with the fact that our lives are in danger.

So, don’t tell us to wait. Don’t whine about the optics. And don’t you dare blame us if our party loses another election cycle by sticking to carefully-crafted talking points designed not to offend anybody.

When our community is grieving, self-righteously telling LGBTQ+ folks to vote for Democrats does nothing to soothe our pain. Instead, next time ask a trans person in your life what they need–money, shelter, food, emotional support–and give what you can. Allyship, done correctly, requires mutual aid as much as voting the right way at the ballot box.

With fascism on the march in the United States, Republicans and their allies on the far right are openly calling for violence against their political opponents. It’s not just queer people under attack: any straight, cisgender ally who dares to express solidarity with queer people is pilloried as a “groomer” by gun-toting, MAGA-hat-wearing bigots on social media–a dangerous and sinister turn in our political discourse.

The only way to win against fascism is to recognize that they won’t stop with marginalized people. They’ll come for us all eventually. Democrats’ pitch to voters must be more than, “we don’t want to kill you, just shut up until November.”

Because for many of us, there are worse things to endure than no longer being alive.

Top photo of C.J. Petersen provided by the author and published with permission.