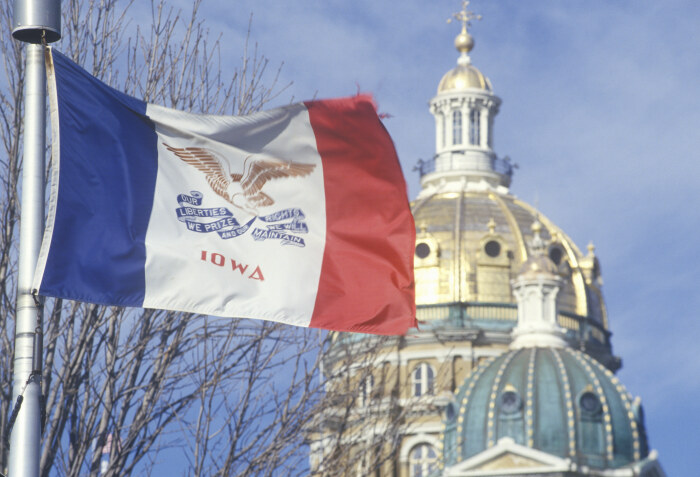 Worse things could befall Iowa and the nation than the Iowa caucus losing its “first-in-the-nation” status in presidential election years.

For example, it might be worse if the state kept that status and was viewed as a bellwether in the 2024 election.

Let’s face it. Iowa has little left of the virtues that had the state press routinely boasting about Iowa being “the center of the political universe” when it came to January and February every four years.

For an art-becomes-life perspective, consider a 1947 movie that kind of foretold the story of the Iowa caucuses.

That flick was Magic Town — about a pollster, Rip Smith, who discovered a town that somehow was a mirror of national opinion.

Polls in Magic Town didn’t even have to have a margin of error — a statistical measure of how inaccurate a random survey might be. Magic Town never was inaccurate.

As a film, Magic Town had Iowa angles. It co-starred Jimmy Stewart and Jane Wyman, who at the time was married to a former WHO radio sports announcer, Ronald Reagan. And the “Magic Town” was a community named Grandview — close enough to our Grand View University to warrant mention.

But the Grandview folks blew it all when it came to light that they were the source of Smith’s incredible polling accuracy.

Today we have farmers’ markets. Back then the Magic Town folks tried to cash in on their prediction celebrity. So they had kind of opinion markets where, for a fee, they would tell you what they thought.

Pretty soon even a margin of error of 75 percent could not preserve the opinion-polling status of Magic Town.

Folks there pretty much frittered away, as Iowa has, what it had to offer national decision making.

Iowa’s credentials for first-in the-nation status were great in the 1970s and into the 1980s.

We had Bob Ray as governor, public schools ranked among the best in the nation, a friendly and bipartisan legislature, an independent judiciary, involved citizens who made the best of opportunities to take the measure of presidential candidates, a lot of news media that were locally owned and highly regarded — almost kind of a Magic State in our own eyes.

2022? We have Governor Kim Reynolds, who tacitly endorsed the “stolen-election” lie. Our governor desperately wants to divert money from public schools to private schools—even if some wealthy folks use state funds to help pay for their kids’ college education.

We have a hate-driven Republican legislature that made a mockery of the words “Iowa nice” and passed some legislation targeting transgender kids, among the most marginalized groups.

Both Reynolds and U.S. Senator Chuck Grassley were ecstatic to have Donald Trump endorse their re-election bids, even as a House Select Committee unearths more and more evidence of the former president's illegal and unconstitutional involvement in the January 6, 2021 insurrection.

Trump’s endorsement of Grassley recognized the senator's key role when, as chairman of the Senate Judiciary Committee, he helped shape the federal bench and U.S. Supreme Court. Thanks to three justices appointed by Trump, the Supreme Court just abolished 50 years of constitutional protection of women’s rights to manage their health and maternity decisions.

And, thanks to Reynolds, gone too in Iowa are the days of nonpartisan, local school boards free from meddling by the legislature and state government.

Do we really want to place all of that in the national spotlight with Iowa at risk of being “the center of political dysfunction”?

To read and view news reports about the caucuses, one would think Iowa businesses would lose a lot of money should we be deprived of first-in-the-nation status. But David Swenson, Iowa State University economist, has found that the monetary impact is minimal. That’s seldom mentioned in caucus-related news.

Fortunately, democracy has provisions for self healing.

Instead of focusing on “first-in-the-nation” status, we’d be better off to focus on the November 8 general election. There's far more at stake for Iowa in the outcomes of the races for U.S. Senate, governor, and the state legislature than there is in the caucus question.

Top photo by Joseph Sohm of the Iowa state flag and the state capitol available via Shutterstock.