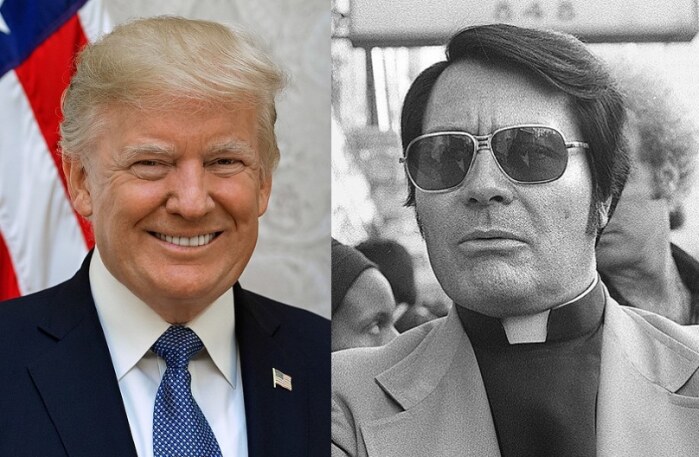 Herb Strentz: Iowa is now governed by a disgraceful Trump cult, masquerading as the once respected Republican Party.

The phrase “Iowa nice” used to be an annoyance to some of us, when used to express the idea that Iowans are nicer than other people. Those of us who have lived in other states, or have family and friends elsewhere, know Iowa has no monopoly on nice people.

But now, instead of being annoyed, there is good reason to mourn the loss of “Iowa nice,” thanks to Governor Kim Reynolds and the Republican-controlled state legislature.

A friend, retired Drake philosophy professor Jon Torgerson, pointed out that the “Iowa nice” label was more inclusive than merely having good neighbors. The phrase recognized our public and private institutions and the people who led them.

“Iowa nice” even included elected officials. We had our own version of the mythical Kennedy Camelot, with a real life, caring Camelot under Bob Ray and a bipartisan legislature.

Unfortunately, Iowa is now governed by a disgraceful cult, masquerading as the once respected Republican Party.

TIME magazine's Washington correspondent Philip Elliott reinforced this view of the Iowa GOP in his commentary for the latest issue. Taking stock of Governor Reynolds’ selection to deliver the rebuttal to President Joe Biden’s State of the Union Address, Elliott sees Reynolds as "an acolyte of Trump’s reboot of the GOP” and as “Sarah Palin 2.0, a conservative avatar" who revels in the "culture wars" and believes "the norms of polite politics are meant to be shredded."

Elliott argues that "In picking Reynolds, the Republican Party seems to affirm that Trumpian politics are durable and remain the de facto position of the base."

A harsh but appropriate analogy comes to mind: what was called the “Peoples Temple,” founded by Jim Jones in Indianapolis in 1955 and moved to San Francisco during the 1970s. More than 900 Temple members took their own lives in “Jonestown,” Guyana by gulping down cyanide-laced Kool-Aid in obedience to Jones in 1978.

Trump's cult doesn't overtly encourage followers to kill themselves, but pushes misinformation about COVID-19 and the vaccines developed to combat it, which has led to many thousands of preventable deaths.

GOP elected officials have used the former president's lies and outrageous statements to justify laws that suppress votes and undermine democracy. That is the Trump cult's answer to the first Republican president’s passionate hope “that government of the people, by the people, for the people, shall not perish from the earth.”

With the Trump cult, the lies, ironies and hypocrisy never end. Recall the nickname of that first Republican president, “Honest Abe.” (Trump once boasted that Republican U.S. Senator Orrin Hatch called Trump the greatest president ever, better than even Lincoln. Hatch’s office promptly issued a denial.)

And recall that a tally of the Trump cult leader showed he told some 30,000 lies while in office.

Reynolds bragged in her State of the Union response that in Iowa, "We take care of each other, and yes, we are as they say, Iowa nice." But here in Iowa, the governor’s and the legislature’s list of nice people apparently does not include public school teachers. According to Iowa Senate President Jake Chapman (the chamber's second-ranking Republican), teachers are pushing a “sinister agenda” and "wish to normalize sexually deviant behavior against our children, including pedophilia and incest." And Republicans passed yet another education spending bill that gives public schools less state aid than they need to keep up with rising costs.

For the legislature and governor, only straight white conservatives seem to deserve the "Iowa nice" treatment. Consider what Laura Belin characterized as “cheerful cruelty”: the new law banning young transgender women from being on athletic teams in Iowa public schools, colleges and universities.

While members of the Trump cult claim keeping transgender students off the playing fields and athletic teams is about "fairness," Democratic State Senator Sarah Trone Garriott had a better perspective in her March 7 newsletter:

The reality is, most students just want to play and be part of a team. As an extension of the classroom, sports provide educational and social opportunities that are crucial to the health and wellbeing of children. This is something that transgender kids need just as much as any child.

But such children are now outside the pale of “Iowa nice” as are their school teachers.

In the way of hopes to cling to, there are questions as to whether the transgender ban is constitutional. And following legislative redistricting, Democrat Trone Garriott and Chapman are November re-election opponents in the new Senate District 14.

Of course, some Republican legislators may object to being called members of a Trump cult.

If so, their renunciation of Trump and much of the legislation passed and pending in Iowa would he refreshing. It would be in accord with an observation attributed to many, including the Anglo-Irish statesman Edmund Burke, 1729-1797: “The only thing necessary for the triumph of evil is for good men to do nothing.”

While too many good people do nothing, the Trump cult continues its devastation in Iowa.