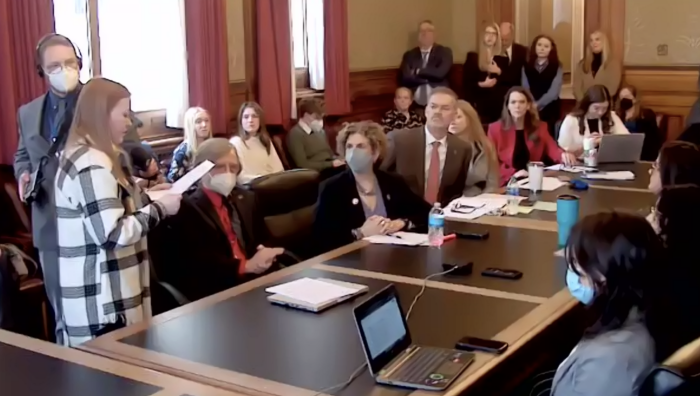 Iowa Republicans have sought to undermine LGBTQ equality for more than a decade, but in recent years, their myriad attempts to discriminate didn't make it past the legislature's first "funnel" deadline.

However, this year Republicans moved bills out of Iowa House and Senate committees that would prohibit transgender girls and women from participating in school sports. The bills are eligible for debate in both chambers.

The legislation is a priority for Governor Kim Reynolds, who declared during a Fox News town hall last spring that she was committed to acting on the issue. She has repeatedly claimed preventing trans girls from competing is a matter of "fairness," a talking point echoed by Republican lawmakers who defended the bills last week.

Their stated concerns don't extend to Iowa's transgender girls and women, who would find yet another door slammed in their face.

The House bill, now numbered House File 2416, is modeled on a law recently adopted in South Dakota. Public and private school sporting events would be designated for "females, women, or girls," "males, men, or boys," or coeducational. Only female students based on their "biological sex" would be allowed to participate in women's or girls' sports.

If a school allowed transgender participation, other students would have grounds to sue the school district, and the Iowa Attorney General's office "shall provide legal representation at no cost" to any school district or employee named in such a suit.

Supporters of the bills couldn't point to one Iowa girl who was denied a spot on a varsity team, let alone a college scholarship or a chance to compete in the Olympics, due to competition from a transgender athlete. Iowa's Civil Rights Act has prohibited discrimination on the basis of sexual orientation and gender identity since 2007; presumably such problems would have emerged by now.

“The State of Iowa has a very strong interest to step up and defend girls sports and ensure that they have a level playing field,” Wheeler says, “and we’re not going to destroy their opportunity to compete at varsity sports, to get scholarships and to get the fame that they deserve.”

A string of high school students echoed those talking points during the Iowa Senate subcommittee meeting on February 17 (less than 24 hours after the bill was published). When it comes to doomsday scenarios, no one could match Tessa Erzen. In addition to being a Carlisle High School athlete, she is leader of a Turning Point USA chapter and a daughter of conservative radio host Steve Deace's producer and co-author Todd Erzen.

Tessa Erzen explained that she isn't as fast as her sister Ainsley Erzen, who also testified at both the House and Senate subcommittees. Tessa placed 22nd at the state cross country meet last year, but she would have placed 133rd if she had run at the boys' state meet.

The younger Erzen said she won't win championships or set records, and might not even run in college. But if "biological boys" are allowed to compete, "Girls like me, we will never run in the state meet, never receive all-conference honors, nothing. There will be nothing left. [...] Girls' sports as a whole, they're going to be gone."

Where will these hordes of boys come from, pretending to be transgender only to take up all the varsity spots? Erzen did not explain.

The lack of logic didn't trouble committee Republicans. State Senator Chris Cournoyer said at the subcommittee that she had benefited from Title IX as a four-sport athlete in high school. "I think we can all agree on the benefits that sports brings to us," she observed, adding that she still plays sports for mental health, exercise, and fun. She expressed a desire to provide a "level playing field" and acknowledged, "This is a very complex issue." She voted to advance the bill because "I want to continue the conversation."

Subcommittee chair Tim Goodwin touted his experience as a former teacher, coach, athletics director, Division I college athlete, and father of an active 16-year-old daughter. "I want you to know that I believe this bill is about fairness, safety, preserving the competitive integrity of female sports," Goodwin said. He asserted that the state's high school athletics associations as well as many athletics directors are "looking for guidance, plain and simple."

To Goodwin, the bill is about "showing our young female athletes that we see you, we hear you, and we will stand by you on this issue." His unspoken message to trans youth in Iowa: we don't see you, hear you, or acknowledge your value as human beings.

Senate Education Committee chair Sinclair, who introduced the bill at the last minute, did not speak on its behalf during the February 17 subcommittee or full committee meetings. I wonder why she wasn't "loud and proud" about leading the charge to exclude trans girls.

Despite the short notice (which was clearly designed to limit opponents' ability to provide public input), several LGBTQ and straight youth opposing the bill testified at the House and Senate subcommittees. So did a few parents of transgender children and trans adults.

One of the high school students told state senators that trans kids have varying athletic abilities, just like other kids. No evidence has shown that males are transitioning to have an unfair advantage over females in sports. Gavy Smith, a trans teen from Decorah, described how much she looks forward to playing sports with her friends. A mother of a trans daughter noted that no girl in Iowa has ever been prevented from getting a scholarship or breaking a record because of competition from a trans girl.

Amrei Blasing, a mother, combat veteran, and transgender woman, provided compelling testimony before the Senate panel. She noted that a girl who loses a volleyball game to a team with a trans player is not likely to take her own life. But a trans girl barred from playing may feel she has nothing to live for. Blasing said she had attempted suicide before. Soccer has pulled her back from dark places; without being able to play, she thinks she might be dead.

Health care professionals also urged lawmakers not to pass the bill. A therapist who works with trans and nonbinary youth spoke about the higher levels of anxiety, depression, and self-harm seen in those groups. Such feelings often lead to suicidal thoughts and behaviors.

A pediatrician explained that support from families and schools is very important to prevent poor physical and mental health outcomes for trans kids, including suicidality. Sports can be an important part of feeling accepted at school.

Side note: Reynolds has occasionally expressed concern about suicides or children's mental health as a way to justify loosening COVID-19 mitigation practices. Nevertheless, the governor is determined to keep trans kids from playing sports despite ample evidence that laws discriminating against LGBTQ people increase suicidal ideation in affected teens.

Democrats assigned to the House and Senate committees spoke passionately against banning trans girls from sports. State Representative Mary Mascher said during the House panel's meeting, “I am adamantly opposed to this bill, because I think it is state-sanctioned bullying."

We talk a good game up here about protecting students, and making sure that their rights are upheld and that we honor and give them dignity in terms of their participation in school, activities and sports. And at the same time, we are setting up a system that will allow the state to sanction bullying in our schools.

When it was time for legislators to speak at the Senate subcommittee meeting, Democratic State Senator Claire Celsi stated, "Trans girls are girls," and the bill "would catastrophically affect" them from the youngest sports teams to the college level.

Celsi pointed out, "I didn't hear Governor Reynolds complain at all last year when the University of Iowa, bereft of football income, unceremoniously chopped the women's diving and swimming teams" in violation of Title IX. The state of Iowa paid $400,000 to settle a lawsuit over that decision and had to bring back women's swimming and diving and institute women's wrestling at the university.

Celsi also reminded colleagues of President Joe Biden's executive order issued in January 2021, which states, "Children should be able to learn without worrying about whether they will be denied access to the restroom, the locker room, or school sports." The order called for a broader application of the U.S. Supreme Court majority opinion in the 2020 case Bostock v. Clayton County, which mandated that LGBTQ people are protected from sex discrimination in the workplace. Biden called for the Supreme Court ruling to apply to Title IX, the federal law that prohibits discrimination in federally funded schools.

That context is why the lobbyist for the Iowa Association of School Boards warned lawmakers that passing this law would put school districts in an "impossible position" of having to choose between complying with state or federal law.

Democratic State Senator Herman Quirmbach used his platform during the Senate subcommittee and full committee meetings to appeal to reality. Trans youth are subject to a lot of harassment, abuse, isolation, threats, sometimes physical abuse, and a higher suicide rate than their peers. The idea that boys would transition to being female solely to get a spot on a sports team is "utterly irrational." Youth who go through transition "are simply being true to something in their heart and in their soul."

At a recent news conference, South Dakota's governor was asked why she thinks 90 percent of that state's LGBTQ+ youth are diagnosed with anxiety or depression.

Playing dumb, Noem told reporters, “I don’t know. That makes me sad, and we should figure it out.”

Gov. Kristi Noem (R-SD), who just signed the first anti-trans bill of 2022 into law, is asked why she thinks 90% of LGBTQ+ youth in South Dakota are diagnosed with anxiety or depression:

“I don’t know. That makes me sad, and we should figure it out.” pic.twitter.com/WbKr2Tlujs

Reynolds can avoid repeating that charade by recognizing that she doesn't need to sign this kind of bill. She doesn't need to punch down on marginalized youth to score points with the Republican base. For once, she can show some empathy for Iowans who don't share her worldview, which elevates the concerns of straight white conservative Christians above others.

Top image: Screenshot from video of February 17 Iowa Senate subcommittee meeting on a bill that would discriminate against trans girls and women in sports.