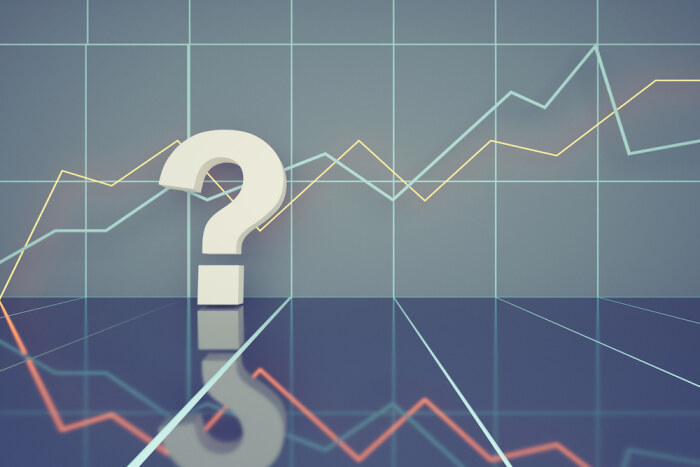 Data show no clear trend for Iowa suicides during pandemic

While defending her approach to the COVID-19 pandemic last year, Governor Kim Reynolds repeatedly asserted that Iowa was seeing an "uptick" in suicides, and listed suicides among the mental health problems that were "exponentially increasing."

Preliminary data on Iowa deaths by suicide in 2020 paint a more complex picture. An estimated 557 Iowans took their own lives last year, the highest number recorded in two decades. However, many of the increased deaths occurred during January and February, before COVID-19 was identified in Iowa and well before any restrictions were imposed to slow the spread of the novel virus.

IOWA SUICIDES HAVE TRENDED UP FOR YEARS

In response to Bleeding Heartland's request, the Iowa Department of Public Health provided this table showing monthly deaths by suicide during the past 20 years. Small print near the bottom notes that figures for 2020 and 2021 "are preliminary and will change as records are registered." Experts on suicide have long observed that it can be difficult to distinguish deaths by suicide from other causes, such as accidental overdoses. 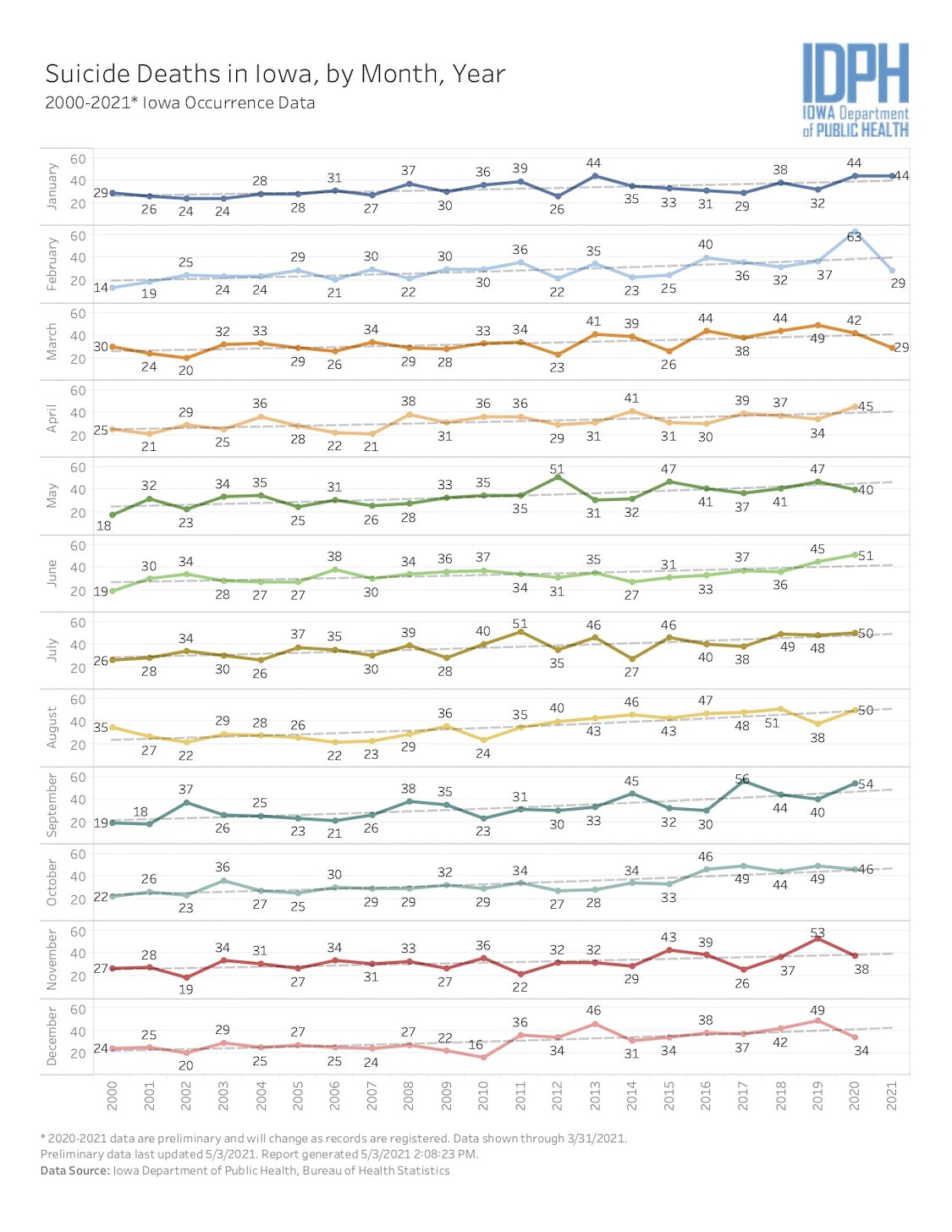 While the chart contains a lot of useful information, it doesn't convey well the broader trend toward more Iowans taking their own lives since 2000, especially over the past decade. I created this graph using the state's figures. 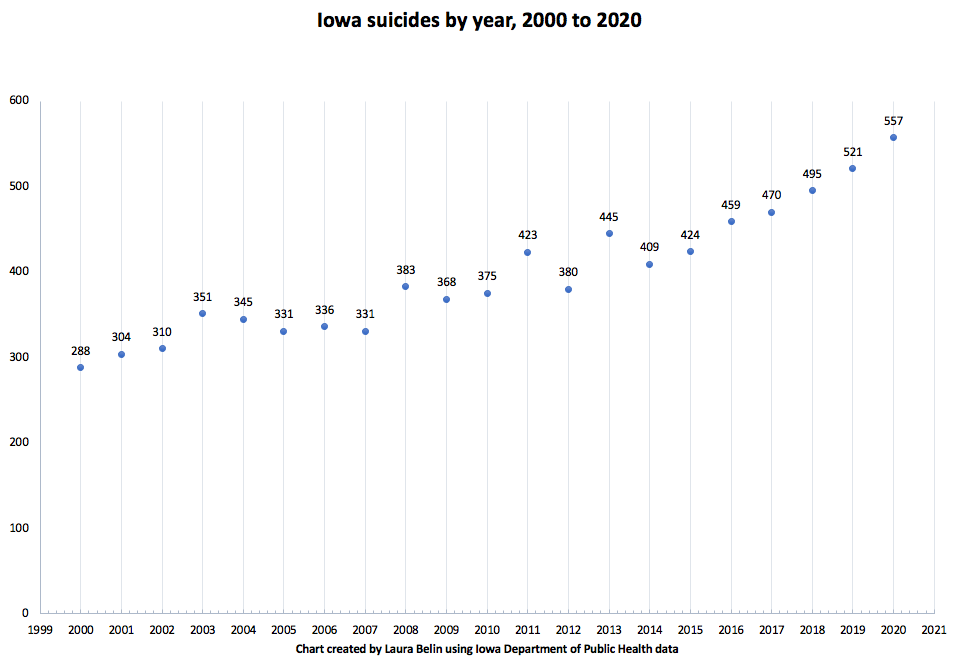 Our state's recorded suicides for 2020 were almost 50 percent higher than the number identified in 2010. That trend isn't specific to Iowa; all over the U.S., suicides have gone up substantially since 1999, for reasons that remain unclear. The suicide rate for farmers and farm workers was particularly high during the 2010s, exceeding numbers recorded during the 1980s farm crisis.

The 7 percent increase in Iowa suicides from 2019 to 2020 is disturbing, given that the U.S. as a whole recorded a surprising 5 percent decrease in suicides last year. Experts disagree on why that number dropped and whether some of last year's suicides were wrongly classified as COVID-19 or accidental deaths. Many mental health conditions associated with suicide attempts increased in 2020, and some survey data indicated more Americans were thinking about taking their own lives during the pandemic.

The American Association of Suicidology commented on the preliminary national data for 2020,

We should be cautious in celebrating this decrease too early as the data points from 2019 and 2020 do not necessarily indicate a trend. We may see a delayed increase in suicides in 2021 or 2022 similar to what we witnessed following the financial collapse in 2008.

Several factors could contribute to future suicides that are indirectly related to COVID-19. Many who have lost loved ones to the virus may continue to experience trauma for years. University of Denver Professor Stacey Freedenthal noted that suicide has been correlated with poverty and homelessness. Once the federal government lifts a moratorium on evictions for non-payment of rent, many Americans could face additional stressors. Tens of thousands of jobless Iowans are among some 1.9 million nationally who will soon lose their federal unemployment benefits.

The Iowa Department of Public Health data doesn't show the race or ethnicity of those who died by suicide. Researchers in some staes have found that Black people were more likely to kill themselves during the pandemic, even where the suicide rate declined for white residents.

Intuitively, Iowa's recent increase in suicides might suggest a connection to COVID-19. However, a comparison of figures from 2019 and 2020 reveals that a large share of the additional deaths occurred prior to the pandemic. In fact, more Iowans died by suicide in February 2020 than in any other month during the past two decades. I created this table to highlight month to month changes.

It's hard to discern any pattern related to the trajectory of the virus or changing mitigation policies. The highest monthly increases in suicides occurred before COVID-19 was found in Iowa. Suicides also increased during the late summer, months after Reynolds had lifted most restrictions on gatherings and business operations.

Conversely, fewer Iowans died by suicide in November and December 2020, when Iowa's COVID-19 deaths were skyrocketing and hospitals became so crowded that the governor imposed new mask requirements and more limits on restaurants and bars.

I sought comment from the Iowa Department of Public Health on whether their staff have any hypothesis about why larger numbers of Iowans took their own lives in the months preceding the pandemic: October, November, and December 2019, and January and February 2020. Spokesperson Sarah Ekstrand replied, "Suicide deaths are rarely attributed to one factor alone," adding that public health employees are "deeply engaged in suicide prevention efforts and resources."

Free, confidential support is available 24/7 for people who have considered taking their own lives. Anyone can call the National Suicide Prevention Lifeline at (800) 273-8255 or contact the Crisis Text Line by texting TALK to 741741. Iowa operates its own free crisis hotlines at all hours and every day of the year, for those seeking help with any mental health issues (including thoughts of suicide) as well as gambling or substance abuse problems. Visit YourLifeIowa.org online, call (855) 581-8111, or text (855) 895-8398.

If a loved one is showing warning signs of suicide, try not to leave the person alone. Try to remove weapons, drugs, or objects that could be used to take one's own life, take the person to an emergency room, or call the National Suicide Prevention Lifeline at (800) 273-8255.

Along with the data on suicides, Ekstrand sent me a document about "Reporting on Suicide during the COVID-19 Pandemic." The International Association for Suicide Prevention prepared the piece for journalists in April 2020. A sampling from the many useful tips:

Reynolds was either not aware of this guidance or ignored it. She repeatedly led the public to believe in a simplistic causal effect: the pandemic was prompting more suicides. She often fell back on that crutch when challenged about her decisions to relax mitigation strategies.

This clip is from May 20, 2020, when the governor had announced plans to reopen movie theaters, museums, bars, and swimming pools. At the time, I reached out to Iowa Public Health and the governor's office for evidence supporting Reynolds' claim about an "uptick" in suicides. I never heard back.

In early October, as case numbers, hospitalizations, and deaths had begun to rise sharply, Reynolds defended her decision not to impose new restrictions such as a statewide mask mandate or capacity restrictions for restaurants and bars, which the White House Coronavirus Task Force and others were recommending. She said she would continue to talk about the importance of wearing masks.

As conditions worsened in November, reporter Caroline Cummings pressed Reynolds on why she wasn't doing more to reduce spread in risky environments like restaurants and bars. The governor repeated a common refrain about balancing "the health and safety of Iowans" against livelihoods that would be threatened by business closures.

Research doesn't support the idea of a zero-sum game where stronger COVID-19 mitigation practices fuel more suicides and lax policies reduce suicides. But even if the governor could prove that doing less to combat virus spread had improved Iowans' mental health, the excess Iowa deaths caused by the pandemic far surpassed any suicides that might have been prevented.

I created this table using the state's newly-released suicide figures and COVID-19 death totals published at Coronavirus.Iowa.gov, which records fatalities by the date on the death certificate. As mentioned above, the suicide numbers are subject to revision following case investigation.

Protecting Iowans against unchecked spread of COVID-19 should never have been pitted against suicide prevention efforts, which are as important as ever.

Those grieving loved ones who took their own lives--an extremely difficult loss to overcome--can find support through the National Alliance on Mental Illness, the Suicide Prevention Lifeline, or Suicide Awareness Voices of Education (SAVE). Some Iowa communities have suicide bereavement support groups as well.