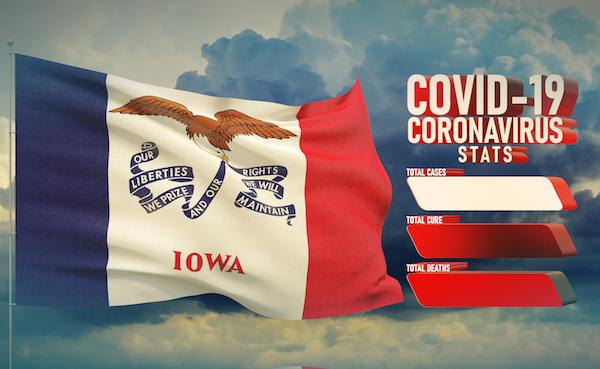 Ian Miller looks for clues on how many of Iowa’s COVID-19 fatalities might have been missed in official counts. -promoted by Laura Belin

Since the onset of the pandemic, I have been skeptical about official statistics on SARS-CoV-2 (COVID-19), particularly numbers of total infections and total deaths, whether from the state of Iowa or from the federal government. I share I.F. Stone’s operating assumption that all governments lie (which is not to say that governments always lie).

Furthermore, Governor Kim Reynolds has done nothing to earn any benefit of the doubt, with her opaque dealings, refusal to take leadership on community PPE use, and general underselling of the pandemic.

It is with this point of view that I saw Laura Belin’s tweet from April 17. In sharing a chart Charles Gaba created, which stated that 1 out of every 355 New Jersey residents had died of COVID-19, Laura wrote:

If it often takes weeks or months for deaths from COVID-19 to be added to coronavirus.iowa.gov, could it be that the 1 in 500 threshold (6,300 out of 3.15 million residents) had already been reached?

Whether or not it had, how confident could we be that 5,881 was anything close to the true number of deaths from COVID-19, when some deaths that happened weeks or months ago still hadn’t been added to the website?

And given the dearth of testing early in the pandemic, how confident could we be that deaths caused by COVID-19 at that time were being recorded as such by the state and the CDC?

I first became aware of using excess mortality as a method for teasing out the impact of the U.S. invasion of Iraq in 2003. While body counts indicated 150,000 to 200,000 violent deaths occurred, excess deaths from all causes–including things like health and sanitation system failures–were estimated at more than a million in 2007.

Similar techniques have yielded estimates of 3 million or more civilian casualties during the Vietnam War, and 500,000 or more in Indonesia in 1965-1966 during the U.S.-backed overthrow of Sukarno.

While there is no reason to believe that Iowa’s actual COVID-19 deaths are orders of magnitude different from the current official number of 5,881, I suspect the true number is higher for the reasons given above. Prompted by Laura’s tweet, I became curious what an analysis of excess mortality might reveal.

Using Iowa Department of Public Health monthly total death statistics, shared by Iowa Public Radio reporter Natalie Krebs, I came up with four-year monthly and annual all-cause mortality averages in Iowa. Here they are, presented with 2020 mortality numbers and the difference between the two:

There were 5,453 excess deaths in Iowa during 2020, as compared with the four year average. At this writing, 4,736 Iowa residents were acknowledged by the state as having died of COVID-19 in 2020, going by dates on death certificates. The difference between state-acknowledged COVID-19 deaths and excess deaths in 2020 is 717.

Does this mean we can confidently assert the pandemic claimed 717 more Iowa lives in 2020 than has been officially acknowledged? No, because there are several confounding factors. Take, for example, January 2021, the last month for which total death numbers from the Iowa Department of Public Health were available.

Here we see that unlike in 2020, when excess deaths were greater than the official COVID-19 death count, more Iowans died of coronavirus in January 2021 than the excess deaths.

There are also confounding factors pushing numbers in the opposite direction. Accidental deaths, including those from alcohol, were on the rise in Minnesota in 2020, a possible side effect of the pandemic and how it has been (mis)managed in the U.S. Furthermore, occasional jumps in numbers may have no obvious explanation. For example, 2,684 Iowas died in January 2016. The following year, 2,985 Iowans died in January, an increase of 301, or 11.2 percent. Numbers of people dying in a given month will fluctuate from year to year.

A further confounding factor is that deaths from heart disease and stroke went up in 2020. Some of those deaths could be linked to people delaying medical care due to coronavirus concerns, and/or stress from the fallout of the pandemic or its management by the government. In that sense, COVID-19 could have indirectly increased fatalities even among some who did not become infected. That is, some Iowans who died likely would not have passed away at that time, had the pandemic never occurred or been better controlled.

In conclusion I would say that, while there is no smoking gun indicating exactly how many COVID-19 deaths were not officially counted, an analysis of excess mortality statistics generally supports my suspicion that the official death toll likely underestimates the impact of SARS-CoV-2 and its management by the state of Iowa and the federal government.

The 5,453 excess deaths in Iowa in 2020 was 15 percent higher than 4,736, the current official death count of COVID-19 in Iowa from March through December 2020. That’s a difference of 717 deaths. Surely not all of them stemmed directly from COVID-19, but some likely did, and other lives ended earlier than if had there been no pandemic, or if Iowa had better managed spread of the virus.

Ian Miller is the author of The Scything Handbook (New Society Publishers, 2016) and an owner/operator of a taxi company in Decorah. His writing has appeared in Mother Earth News, the apparently-now-defunct Permaculture Magazine and Seed Savers Exchange publications. He a former semi-professional musician, having recorded and toured with bands such as Splayed Innards, Varsity Drag, and Destroyed but Not Defeated. Originally from Dubuque, he has lived in San Francisco and Austria and now resides in Decorah with his wife and two children.