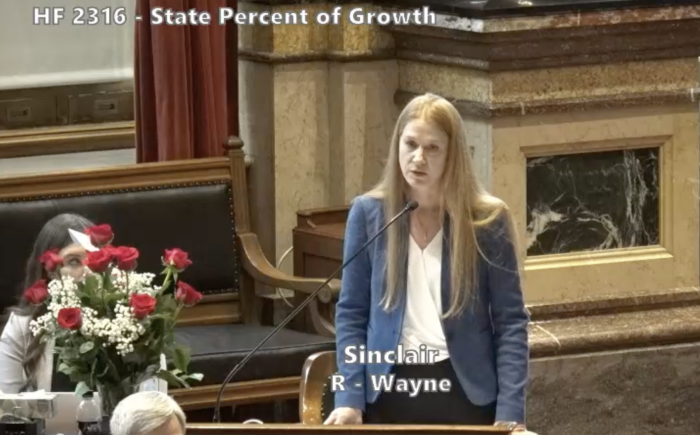 Iowa House and Senate Republicans have yet again approved school funding at a level that will fail to meet the needs of K-12 school districts.

House File 2316 increases Supplemental State Aid by 2.5 percent (or $181 per pupil) for the coming academic year, the level Governor Kim Reynolds requested. Total state funding for public school districts and Area Education Agencies will increase by $172 million to about $3.58 billion, according to analysis by the nonpartisan Legislative Services Agency.

GOP lawmakers bristle at accusations that they have underfunded K-12 schools, when state aid has increased nearly every year. Republicans "have never once" cut funding to education, Iowa Senate Education Committee chair Amy Sinclair said during the February 14 floor debate.

But a 2.5 percent increase is tantamount to a funding cut in real terms, because it will not keep pace with rising costs for school districts.

Moreover, a review of school funding over nearly 50 years shows that this Republican trifecta has been far less willing to support public schools than past Iowa legislatures.

The bill passed both chambers on party-line votes after Republicans defeated several Democratic amendments, including a proposal to increase state funding by 5 percent. Democrats have noted that this level would cost the state about $300 million, the same price tag as a corporate tax cut the governor has proposed.

Sinclair defended the plan, saying "Republican senators establish rates of growth that are sustainable, predictable, reliable and funded." During her closing remarks on the bill, Sinclair said it was "patently false" to claim Republicans have cut education funding. She noted that since 2017, Republicans have approved more than $400 million "new dollars" for school districts.

The Legislative Services Agency published a document showing how much state aid to K-12 schools increased in each year since Iowa adopted the current school funding formula in the early 1970s. If the numbers are hard to read on your screen, you can access a pdf version of the analysis here. 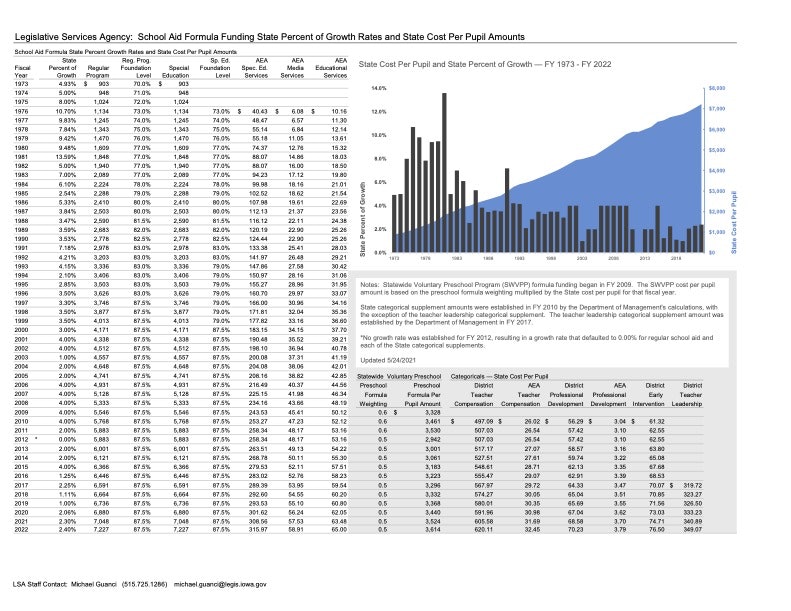 Here's a closer view of the graphic: For decades, state aid typically increased by more than 3 percent per year. From 1973 through 2010, there were only six years that the state legislature approved a school funding increase below 3 percent.

In contrast, state aid has grown by more than 3 percent only once since 2011. The legislature has been particularly stingy since Republicans gained an Iowa Senate majority after the 2016 election, giving them full control of state government.

Over the past decade, the legislature approved the following increases in state aid for schools:

To illustrate how this underfunding has affected schools over time, assume you received $100 in 2010, and that amount rose each year by the same percentage the legislature increased state aid for schools. You would have received $124.75 for the current fiscal year, which would rise to $127.87 following the 2.5 percent increase Republicans just approved.

You would need to cut expenses substantially or raise revenue from other sources (such as property taxes) to balance your budget. That's why so many schools have reduced staff or eliminated programming in recent years.

Randy Bauer, who served as Governor Tom Vilsack's budget director for six and a half years, commented on Twitter, "The issue that gets overlooked is Iowa controls school budgets, so the lack of allowed budget growth versus the rate of inflation gets compounded year over year. It's a ticking timebomb to mediocrity."

Following passage of the school funding bill, Quirmbach (a longtime economics professor at Iowa State University) gave a personal point of privilege in which he described what economists call the "money illusion."

Money illusion means that you look at the dollars without looking at the cost of what you need to buy with those dollars. [...]

That's exactly the story of the last five years of education funding that has been engineered by our friends on the Republican side of the aisle. They have indeed increased the dollars a little bit each year.

But to call that an increase is to engage in money illusion. You're not looking at the cost of goods and services that those dollars have to buy.

No matter how much Reynolds and other Republicans brag about "new money" for K-12 education, public school districts will face many difficult choices as they set their budgets for the 2023 academic year.

UPDATE: I forgot to mention that 81 Iowa school districts will not receive any state funding increase in the coming year, because their enrollment has declined by enough to counteract the 2.5 percent increase in state aid per pupil. The Legislative Services Agency listed those mostly rural school districts in this document.

The state's "budget guarantee" process allows school districts in that position to spend 101 percent of the previous year's funding. But that increase (estimated at $8.9 million across the 81 districts) will be financed through local property taxes.