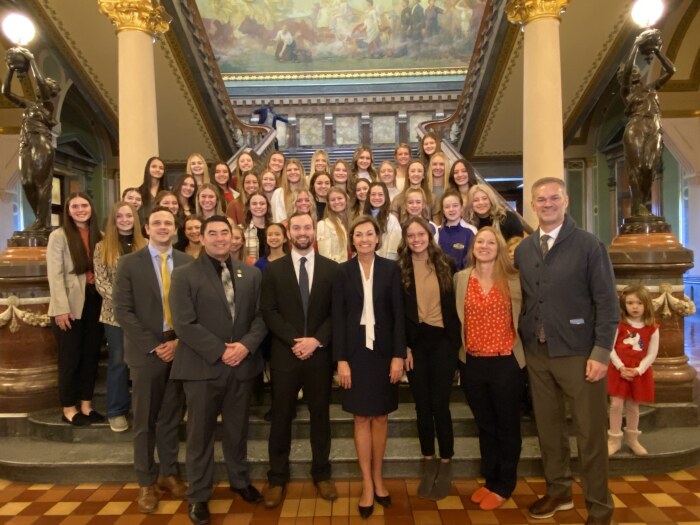 So it was that just this week, Reynolds asserted in an interview with the Des Moines Register that mental health "has been so important to me." The governor lamented the pressures kids have faced over the past two years, "the depression, the anxiety," adding, "We've seen suicide rates among young girls up over 50 percent" during the COVID-19 pandemic. She bragged about "working on mental health for five years" and "standing up a children's mental health system."

You'd never guess she just signed a bill that is guaranteed to increase depression, anxiety, and suicidal ideation among some of Iowa's most vulnerable youth.

Governors reserve public bill signings for important legislation: bills they're most proud of, which they believe will bolster their case for re-election. Reynolds gathered Republican lawmakers and several dozen straight white conservative Christians in the capitol rotunda on March 3, when she signed a bill banning transgender girls and women from sports competition in K-12 schools, state universities, and community colleges.

I can't make a stronger case against House File 2416 than LGBTQ advocates did when speaking at legislative subcommittee hearings and in written statements I've published at the end of this post. Democratic lawmakers also raised many compelling points against this "state-sanctioned bullying" during the Iowa House and Senate floor debates.

As I wrote last month, for all of their talk about "fairness," Reynolds and other supporters of the legislation couldn’t point to one Iowa girl who was denied a spot on a varsity team, let alone a college scholarship or a chance to compete in the Olympics, due to competition from a transgender athlete.

But let's say for the sake of argument that a handful of cisgender girls might do less well in their chosen sport if trans girls were allowed to play. Is that goal important enough to justify treating all transgender students like second-class citizens, depriving them of the physical and mental health benefits of participating in sports?

I question whether this law will survive an inevitable challenge in federal court over constitutional guarantees of equal protection and Title IX protections for women and girls. The Des Moines Register's Stephen Gruber-Miller and Ian Richardson explored the legal issues here. If the law is subjected to heightened scrutiny, the state will need to demonstrate in federal court that there is an important government interest in prohibiting all transgender girls from playing on teams that align with their gender identity.

Side note to those who claim trans girls remain free to compete on boys' teams in Iowa: once upon a time, people on the wrong side of history argued in court that the Defense of Marriage Act didn't discriminate against gays and lesbians, because like straight people, they were allowed to marry partners of the opposite sex. That concept didn't hold up in the Iowa Supreme Court or in the U.S. Supreme Court.

But back to the main point of this post: Reynolds' cheerful demeanor as she confirmed the rights and happiness of LGBTQ Iowans mean nothing to her. Unlike most bills, which go into effect on July 1, House File 2416 was written to take effect immediately. So trans girls who already play on their school teams can't compete in any spring sports.

Look at how joyful the governor appears in this picture posted to her official Facebook page. She's surrounded by cisgender girls who are equally thrilled about punching down on their most marginalized peers, in the name of "protecting girls' sports." 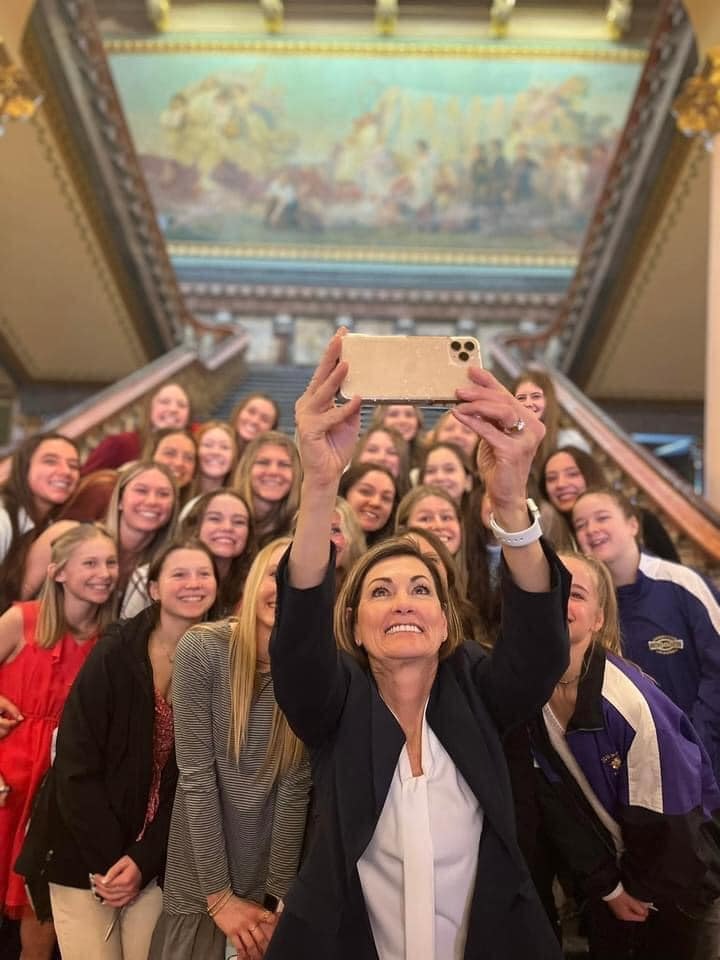 The governor loves to talk about mental health when doing so serves some other part of her political agenda. For instance, she periodically cited a supposed "uptick in suicides" during the pandemic (which did not really occur) to justify lifting restrictions designed to slow the spread of COVID-19.

And while delivering the Republican response to President Joe Biden's State of the Union address on March 1, Reynolds declared, “What happened — and is still happening — to our children over the last two years is unconscionable. Learning loss. Isolation. Anxiety. Depression. In so many states, our kids have been left behind and many will never catch up.”

How depressed and isolated do Iowa's transgender children feel now, knowing their governor sought extensive media coverage as she crushed their spirit?

GOVERNOR UNWILLING TO MEET WITH THOSE SHE HURT

One Iowa Action board chair Angus Raymond said in a March 3 statement,

We repeatedly requested through every available channel that Governor Reynolds or her staff meet with impacted students and their families to hear their concerns but were ignored or rebuffed at every turn. Considering her remarks just two days ago that Americans are ‘tired of politicians who tell parents they should sit down, be silent, and let government control their kids’ education and future,’ this move feels like cruel irony at best or intentional hypocrisy at worst.

Reynolds was also too cowardly to meet with transgender Iowans before signing a 2019 law that deprived Medicaid recipients of coverage for gender-affirming surgery. Nearly three years later, some Iowans are still suffering due to that discriminatory law.

If the governor had been brave enough to face families directly affected by House File 2416, she would have heard from people like Gavy Smith of Decorah.

Gavy has played on girls' teams since 5th Grade.

Here's another clip from Starting Line's interview with Gavy Smith, the Decorah teen who had been advocating against the now law that bars trans girls and women from competing in school-sanctioned athletic events.

Incidentally, the only Iowa Republican lawmaker to vote against this bill was State Representative Michael Bergan, whose district includes Decorah. Perhaps listening to Gavy and her family gave him some empathy the rest of his GOP colleagues lacked.

Instead of passively listening to the governor pontificate about her alleged concern for children's mental health, journalists should press Reynolds on why she ignored warnings that House File 2416 would devastate kids who already face more mental health challenges than their straight peers.

From One Iowa Action Board Chair Angus Raymond:

“Despite overwhelming opposition, and a plethora of medical and mental health experts giving testimony to how this will cause harm, Gov. Reynolds is telling Iowa’s transgender children and youth that they are less-than, and unimportant to her state in blatant disregard for Title IX. We are profoundly disappointed in the legislature and the governor’s office.

We repeatedly requested through every available channel that Governor Reynolds or her staff meet with impacted students and their families to hear their concerns but were ignored or rebuffed at every turn. Considering her remarks just two days ago that Americans are ‘tired of politicians who tell parents they should sit down, be silent, and let government control their kids’ education and future,’ this move feels like cruel irony at best or intentional hypocrisy at worst.”

“My heart is breaking for trans youth in Iowa who now will not have lifesaving access to sports,” said Anne Lieberman, Athlete Ally’s Director of Policy & Programs. “HF2416 is one of the many bills around the country singling out transgender young people, increasing bullying and harassment, and preventing them from participating in the sports that they love. What these bills signal is that lawmakers do not believe trans youth deserve to be safe and included in every aspect of their lives. We will never stop fighting this cruelty.”

"It’s incredibly disappointing and frankly disgusting that there are members of the Iowa Legislature who have equated being transgender to cancer and referred to LGBTQ people as "mentally ill".

The supporters of this bill covertly strategized to ram this bill through to passing to avoid any confrontation, question, or challenge against this discriminatory bill.

This is state-sanctioned bullying, and we are greatly disappointed in the adults in the state capitol that openly voted to discriminate against children.

These votes will be remembered as an embarrassing attempt to score cheap political points, at the expense of innocent children. Iowans deserve better, and transgender children deserve better."

"This cruel law violates the civil rights of transgender girls and women in our state. We should all agree that it’s important for our schools to value, support, and protect our kids and young people who are transgender.

But the sad reality is that enacting this law does the opposite. Our legislators and the governor heard from vulnerable Iowa kids and their families, and about how important participation in school sports is to them in living fully as themselves in all aspects of their lives.

Elected officials have ignored their pleas and have instead passed a law that actively marginalizes and isolates these kids. They are scoring political points at the expense of transgender girls who just want to play team sports along with other girls."

Top image: In photo posted to her official Facebook page, Governor Kim Reynolds poses with Republican lawmakers and girls who support barring transgender girls from participating in sports teams that align with their gender identity.