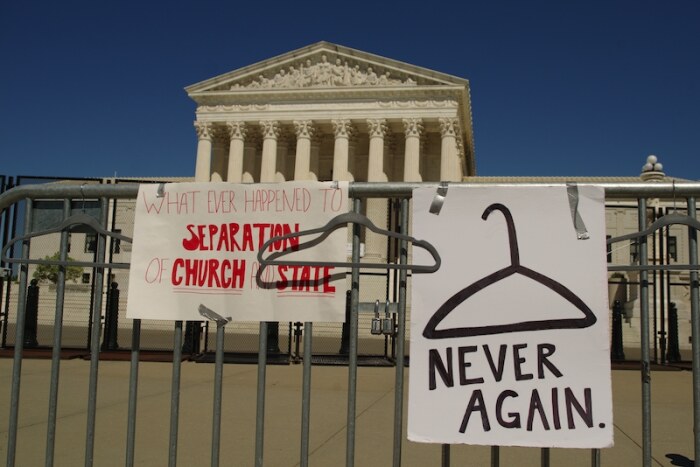 Separating the ethic from the dogma

A Kentucky circuit court recently granted a temporary injunction to halt the implementation of Kentucky's "trigger law" that would ban abortion in response to the recent Dobbs Supreme Court decision. The judge spelled out perhaps the clearest rationale to date why the most extreme of the anti-abortion laws are blatantly unconstitutional according to the Kentucky state constitution (regardless of what the current Supreme Court says):

"This is not a particularly close call. As discussed above, by ordaining that life begins at the very moment of fertilization, the General Assembly has adopted the religious tenets of specific sects or denominations. The General Assembly ignored the contending positions of other faiths regarding the origins and beginnings of life. It is true that the General Assembly has sweeping authority to legislate for the public good, but expressly encasing the doctrines of a preferred faith, while eschewing the competing views of other faiths, is an arguable violation of Section 5's prohibition on the establishment of religion." (EMW Surgical Center v. Daniel Cameron, p. 19)

That does not mean that this current U.S. Supreme Court, one of the most openly-sectarian ever, or lower courts packed with religious fundamentalists, won't attempt to overturn this injunction. But it is a clear statement that some lawmakers and judges in the United States today have lost an important legal and theological distinction in their recent decisions.

There is a difference between a religion-based ethic generally recognized in a society and religion-based dogma, those points of doctrine on which the myriad of Christian denominations have staked their independence from each other. Not to mention the millions of American citizens who profess faiths other than Christianity, and those constitutionally equal citizens who profess no religious faith at all.

In this context, ethics refers to the general principles regarding "how people should get along with each other." Contrary to the religious literalists who are convinced that the idea of "right versus wrong" was invented in the Bible, ethical precepts often preceded literate societies and their sectarian scriptural expressions.

On the positive side of ethical behavior, hospitality to the stranger and relief to the downtrodden certainly show up in the words attributed to Jesus (e.g., Matthew 25:37-40), but similar sentiment is also found in the Muslim scriptures and other religious traditions as well. Religious and non-religious people often agree on basic ethics.

On the punishment side, all societies place some sort of ethical prohibition on murder, but the definition of that term, and the appropriate consequences when citizen jurors are faced with the "edge cases" frequently differ, even within a single community. And historically in America, the color of your skin has long had a direct correlation with your punishment or lack thereof, even (or especially) in the most religiously-observant regions of the country.

Dogma, on the other hand, describes the "finer points" of religious doctrine that often literally define denominations vis-à-vis their historical cousins, and is given institutional imprimatur for particular sectarian adherents. Dogma includes prescribed belief in specific versions of past events, such as the six-day creation depicted in Genesis, as well as faith in future events, for instance what will happen to you when you die.

Religious purges have been waged for centuries over dogma, and currently today the United Methodist Church, one of the largest Christian denominations in the country, is splitting in two over the basic dogmatic question of the equal humanity of LGBTQ+ people in God's eyes. Congregations and their members are being forced to choose sides based on dogma, while the more inclusive ethic of "Christian love" is being set aside.

From the court-side view...

Aside from some very general language in the First Amendment, the Constitution of the United States stays pretty clear of religious questions. The language of "separation of church and state" is commonly attributed to President Thomas Jefferson's letter to Baptists in Danbury, Connecticut, who were a minority denomination, and discriminated against, in the northeast in 1802. Connecticut actually had a “state church” (and not a Baptist one) until 1818. Jefferson wrote:

Believing with you that religion is a matter which lies solely between Man & his God, that he owes account to none other for his faith or his worship, that the legitimate powers of government reach actions only, & not opinions, I contemplate with sovereign reverence that act of the whole American people which declared that their legislature should “make no law respecting an establishment of religion, or prohibiting the free exercise thereof,” thus building a wall of separation between Church & State.

Ironically, pastors representing the Southern Baptist Church are today often at the leading edge of the "Dominionist" movement, which seeks to force a very Evangelical interpretation of narrow religious dogma into all centers of governmental power, from local school boards up to the Presidency, intentionally excluding "non-believers" and "the wrong kind of believers."

In a very recent case, the Supreme Court found in favor of a fundamentalist football coach who insisted on public prayer on the 50-yard line after games, even after Justice Sonia Sotomayor presented convincing evidence of the coercion of teenager players to participate. And this despite very clear instructions to the contrary from Jesus if one truly believes in a literal reading of the New Testament as fundamentalists claim:

“And when you pray, do not be like the hypocrites, for they love to pray standing in the synagogues and on the street corners to be seen by others. Truly I tell you, they have received their reward in full. But when you pray, go into your room, close the door and pray to your Father, who is unseen. Then your Father, who sees what is done in secret, will reward you." (Matthew 6:5-6 NIV)

The ongoing debate over abortion actually demonstrates very well the difference between the concepts of "community ethic" and "religious dogma." Most Americans, religious or not, believe in "some kind of line" at which a woman should be compelled to carry a viable unborn fetus to term. The reality is, however, that this line is very much a statistical continuum, for reasons reasonably articulated as well as by religious faith and "gut feel."

As the Kentucky judge above correctly noted, a "life begins at fertilization" standard is on the far extreme of that continuum, with Christian fundamentalist and conservative Catholic adherents comprising the plurality holding that position.

Most of the country, however, including millions of religiously observant people, hold to a very different ethical line on abortion. Politicians who impose such a radical line, and the judges who enable them, are literally preaching and enforcing sectarian religious dogma. And that is unconstitutional. It is as simple as that.

Top image: Pro-choice protesters leave signs on a fence in front of the U.S. Supreme Court on May 9, 2022. Photo by Philip Yabut, available via Shutterstock.