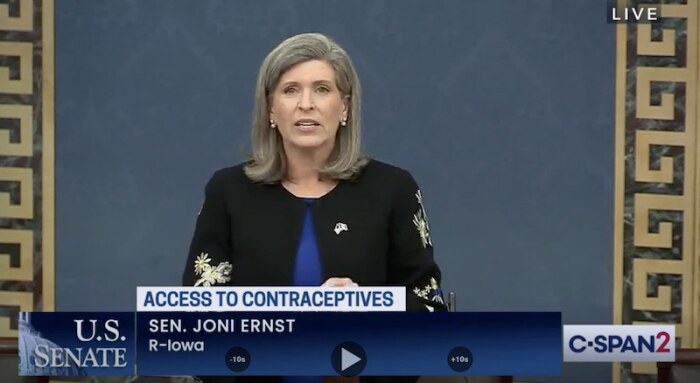 U.S. Senator Joni Ernst has blocked a Democratic bill that would provide a federal guarantee of contraception rights.

Democrats sought to pass the bill, which cleared the U.S. House mostly along party lines, via unanimous consent during Senate floor debate on July 27.

Ernst rose to object and advocated for a measure that would speed up an over-the-counter designation for oral contraception pills. The bill is a companion to a bill that U.S. Representative Ashley Hinson introduced in the House last week. Representative Mariannette Miller-Meeks and Senator Chuck Grassley are co-sponsoring the measure.

Senator Mazie Hirono of Hawaii introduced the Democratic bill. After quoting some Republicans who waved off concerns about birth control access as "hysteria," she explained the threat stemming from the U.S. Supreme Court's Dobbs decision overturning Roe v. Wade. A pending bill in Ohio "would effectively ban all abortions from the moment of conception, and potentially other forms of birth control, like IUD's."

Senator Ed Markey spoke next, depicting the bill as a necessary response to "an illegitimate, stolen, and radicalized United States Supreme Court," which "is putting the fundamental rights of Americans in jeopardy." In a concurring opinion to Dobbs, Justice Clarence Thomas argued that other longstanding precedents should be overturned, including the 1965 Griswold decision that established a right to contraception.

Republicans in some states are following Thomas' "call to action" by "continuing to attack and to restrict the right to contraception." For example, they cut off public funding for contraception, define abortion broadly to encompass some forms of contraception, and allow health care providers to cite religious beliefs in refusing to provide contraception services.

The Democratic bill would recognize a federal right "to obtain and use contraception," and would "guarantee a health care provider's right to prescribe contraceptive products and services. In addition, it would "protect a range of contraceptives that are legally marketed under the federal Food, Drug and Cosmetic Act" and would establish a private cause of action against state policies or individuals interfering with birth control access.

Ernst rose after Markey asked for unanimous consent. I pulled this clip from C-SPAN's live feed, showing the tail end of Markey's speech and the exchange between him and Ernst that ensued.

Ernst characterized the Democratic proposal as a "sympathetically titled bill" that would go "far beyond the scope of contraception." She asserted that its provisions "could guarantee the funding of abortion providers" and defines contraceptive so broadly "that it could include drugs to induce an abortion weeks or months into a pregnancy."

In reality, the House-approved bill mentions emergency contraception that prevents pregnancy, not drugs used for medication abortions up to about 10 weeks of pregnancy. After Ernst voiced the same objections during a Senate session last week, the Washington Post noted that "federal Title X funds are prohibited from being used on abortion services for family planning."

Ernst did admit that "routine use contraceptives should be more easily available," and said the current situation most adversely affects women living in rural areas, far from a doctor. Rural women don't need "a platitude-filled messaging bill like we have here."

The Republican bill creates incentives for manufacturers to seek approval to sell birth control pills over-the-counter, and allows "priority review" for such applications. "With my bill, women 18 and older can walk into the local pharmacy, whether that be in Sidney, Iowa, or the deepest parts of Manhattan, and get the routine use birth control they need. Madam President, when your doctor is 30 miles away and gas is $6 a gallon, you don't need a messaging bill. You need access."

Like Hinson during the House floor debate, Ernst did not acknowledge that hormonal birth control is not appropriate or desirable for everyone wishing to prevent a pregnancy. What if rural women can't find a local provider willing to insert long-acting reversible birth control methods? What if they need emergency contraception after a sexual assault, or if a condom breaks?

Nor did the senator admit that the Republican bill does nothing to guarantee access to Americans under age 18 who need birth control pills, either as contraception or for some other purpose, such as managing irregular or painful periods.

Markey raised some of those points when he objected to Ernst's bill. Not only would the GOP alternative fail to codify a constitutional right to birth control, "her bill would actually restrict access to birth control for individuals under the age of 18 requiring a prescription, even if the Food and Drug Administration has approved an over-the-counter option."

The Democrat added that Ernst's bill "does nothing to address the reality that for many women, true access means being able to afford birth control as well." (Health insurance typically does not cover products purchased without a prescription, so 100 percent of the cost would come out of the individual's pocket.)

Markey criticized Republicans for failing to acknowledge that an over-the counter option "doesn't help patients if their states are chipping away at their right to birth control."

He vowed that Senate Democrats will keep trying to pass the Right to Contraception Act. However, the bill doesn't currently have support from 60 senators, the number needed to overcome a GOP filibuster. Igor Bobic reported for the Huffington Post, "It’s unclear whether the bill protecting contraception will get a vote on the Senate floor amid the busy calendar, with many other competing priorities on the Democrats’ agenda."

“Supporting manufacturers in their efforts to allow women to purchase birth control over-the-counter and without the requirement of a prescription is an important and commonsense step in expanding health care choices and removing unnecessary hurdles, especially for those in rural areas who may need to travel long distances in some cases just to see their doctor,” said Senator Ernst. “Thanks to each of my colleagues in the House and Senate for their support on this measure.”

“We need to ensure all women, including in rural areas, can easily access safe, effective and affordable contraception. I appreciate Senator Ernst and Congresswomen Hinson and Miller-Meeks for leading on this important issue,” Senator Grassley said.

“As a physician and former Iowa Director of Public Health, I recognize the need for increased access to contraceptives and am a strong supporter for increasing women’s access to contraception. As an Iowa State Senator, I was proud to introduce a bill to allow women over the age of 18 to access over-the-counter contraceptives in the state of Iowa. I would like to commend Senator Ernst on championing this legislation in the U.S. Senate and I am proud to work with my Iowa colleagues in the House in introducing the Allowing Greater Access to Safe and Effective Contraception Act,” said Congresswoman Miller-Meeks.

“Allowing adult women to access over-the-counter birth control at their local pharmacy is commonsense policy. This is particularly important in rural Iowa, where women often have to drive long distances to get to their doctor’s office. I am grateful for Senator Joni Ernst’s leadership on this important issue in the Senate and look forward to working with her to ensure adult women can conveniently access FDA-approved birth control,” said Congresswoman Hinson.

The Allowing Greater Access to Safe and Effective Contraception Act works to make routine-use contraceptives available OTC to patients without a prescription. The bill grants priority review by the Food and Drug Administration (FDA) to any supplemental application made by a drug manufacturer to move its routine-use contraceptive product from prescription to OTC for individuals over the age of 18. A priority review designation means the FDA’s goal is to take action on an application within six months. It also waives any FDA fees that would be associated with such an application.