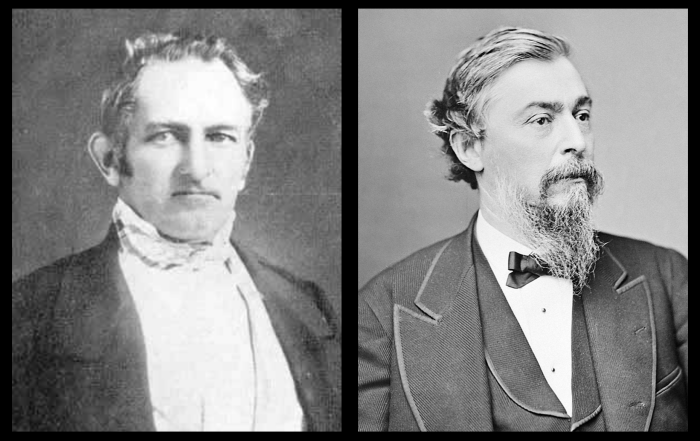 This is column 19 of a series about people and events related to 19th-century equal-rights champion Alexander Clark. What started as a single column for Black History Month has turned into a weekly project I will continue until I run out of steam, or the editor pulls the plug.

If you’re following along, you know we’re headed toward Iowa’s desegregation drama of 1867-1868, and then on to Clark’s time as U.S. minister to Liberia. As the project grows, I tell more of the “back story”—connecting more dots.

I didn’t start out intending to tarry in pre-Civil War 1850s, but that’s where we learn the context that explains what happens later. We’ve already touched on the so-called Underground Railroad bringing freedom seekers from slavery below our state border. We’ve introduced some antislavery characters who settled here, Congregationalists in particular. Recently I told of Muscatine’s promotional pitch to New Englanders in a Boston periodical.

The city of Muscatine derives its importance, in a commercial point, mainly from its peculiar location. It is situated on the extreme western bend of the Mississippi River, and is thus thrown into the interior, as it were, of the State. It is the landing point on the river for a large tract of country, and in this respect has the advantage over every other city in lowa.

Our advantages for river traffic and inland access argued for the next big thing. Railroads!

The Mississippi and Missouri Railroad—being a continuation of the Rock Island and Chicago road, which crosses the Mississippi River at Rock Island, thirty miles above, is located through Muscatine, on its route westward. It is also the terminus of the Muscatine and Cedar Valley Railroad. A railroad is located also from Muscatine to Keokuk. When these roads are completed, Muscatine will have added to her natural advantages greater railroad facilities than any city in Iowa.

Boosters might be forgiven some wishful thinking and the present-tense description of a bridge that wouldn’t open for nearly a year, having taken three years to complete.

From the Daily Davenport Gazette, February 9, 1855: “The name and the fame of the Bridge City will be world-wide…destiny has designated this as the bridging point of the great Mississippi…a work so national in its importance.”

First, let’s connect dots for a Muscatine family. In column number 5, writing about Justice Robert Allbee (whose excellent biography of Alexander Clark was published in the Drake Law Review), I noted: “The Allbee ancestors settled in Muscatine County in 1856.”

Irving B. Richman tells their story in his 1911 History of Muscatine County, Iowa:

The bridge was raised upon a falsework that rested on the ice that was from three to four feet thick that winter. Gustavus Allbee drove the team that raised all of the falsework. When both ends of the bridge had been constructed from their respective shores to the piers next to the drawpier on each side, two large ropes were stretched from each end to the drawpier, plank were fastened upon them and a handrope stretched above them, thus making swinging bridges over which the workmen might pass to the drawpier from either side. On Saturday evening, at the completion of these swinging walks, Allbee’s boss heard the contractor suggest to the superintendent that they bring their wives down early Monday morning and have them to be the first women to cross the mighty river on a bridge. At Mr. Cook's suggestion he and his wife, accompanied by Mr. and Mrs. Allbee and their son Elbert, at that time six and one-half years of age, repaired to the bridge early Sunday morning. It was a raw, windy morning in March, 1856, the river was full of floating ice, the current swift and the walk swung so frightfully that Mrs. Cook took but a step or two and shrank back refusing to go; but brave little Mrs. Allbee unhesitatingly took the lead, and, followed closely by her husband, leading their little son, walked clear across to the Illinois shore and back to Iowa. Thus she was the first woman ever to cross the Father of Waters on a bridge and her son Elbert the first child ever to do so.

Please return for more about rails westward and the “underground” north to freedom. I’m sorry if digressions frustrate readers, but more dots connect whenever we loop back or detour. There’s no end to these stories!

Top image: Henry Farnam and Thomas Durant headed the firm that constructed the first railroad bridge across the Mississippi River, completed in 1856 between Rock Island and Davenport (Wikipedia).