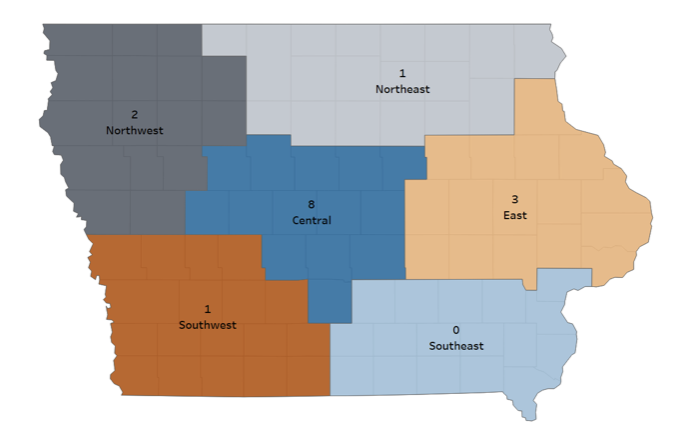 Resources for Iowans concerned about monkeypox

The state of Iowa has opened a call line to answer questions about monkeypox, and continues to limit vaccinations to groups most at risk of contracting the virus.

As of August 17, Iowa had fifteen confirmed monkeypox cases, eight of them in the central region that includes Polk County. According to HHS public information officer Sarah Ekstrand, all known Iowa cases involved adults; "At this time, the risk of monkeypox to children and adolescents in the United States is low."

Monkeypox is primarily spread through skin-to-skin contact, but can also be transmitted through sheets, towels, clothing, or objects that touched rashes or lesions on an infected person.

The U.S. Centers for Disease Control (CDC) produced this video to explain how monkeypox is spread, ways to avoid getting exposed, how to lower your risk during sex, and what to do if you have a new rash, sores, or other symptoms.

VACCINES AVAILABLE TO MOST AT-RISK POPULATIONS

Ekstrand told Bleeding Heartland on August 22 that the state had administered 1,057 doses of the 2,641 doses it received of the monkeypox vaccine, known as JYNNEOS.

For now, Iowa is limiting monkeypox vaccinations to two groups. Those who know they were in contact with an infected person are eligible, because the vaccine has been effective in preventing cases even after a known exposure.

Iowans at the highest risk for monkeypox can also schedule a vaccination. Although anyone can get the virus, most cases so far have been identified among men who have sex with men. For that reason, the state is prioritizing vaccinations for "Gay, bisexual, other men who have sex with men, or transgender people who are at increased likelihood of exposure" for any of the following reasons:

In response to concerns about the vaccination criteria, the Polk County Health Department released a statement on August 18 explaining that when vaccine supplies are limited, public health professionals "concentrate our prevention and control efforts where we are finding the virus." That is why the current focus is on protecting men who have sex with men. The criteria may change if more monkeypox cases are identified among other groups in Iowa.

One data point supporting the state's current approach: confirmed monkeypox cases may have peaked in some large U.S. cities, due to targeted vaccination campaigns and changed behavior in some of the most at-risk populations.

The state has distributed monkeypox vaccines to only a few providers in large metro areas.

Residents of central Iowa can schedule a vaccination through the Polk County Health Department's website, or by calling 515-323-5221. Primary Health Care/The Project, a Des Moines organization established during the 1980s to support Iowans with HIV, is also scheduling monkeypox vaccinations. Call 515-248-1595.

Finally, residents of northwest Iowa can schedule an appointment through the Siouxland District Health Department in Woodbury County. There is a website tool, or eligible people can call 712-279-6119.