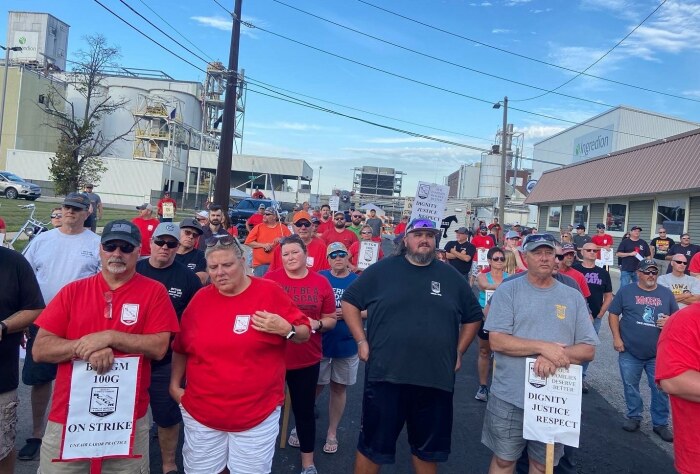 Rally in support of Ingredion workers on strike

Dave Leshtz is a member of AFT Local 716 and editor of The Prairie Progressive.

As a crowd gathered for a rally by Lucita’s Diner in Cedar Rapids on a hot September 1, two people in Union Yes! t-shirts shaded their eyes while looking up at the top of the Ingredion plant across the street.

“See that dust coming off the roof?” said one. “Yeah,” said the other, “that’s what happens when you have people inside who don’t know what they’re doing.”

The “people inside” are management personnel replacing the 120 workers on strike at one of the oldest and biggest factories in this city of 140,000 on the banks of the Cedar River.

Workers were unanimous one month ago in rejecting the proposed contract, which includes twelve-hour shifts, reallocation of overtime, and elimination of five union jobs.

One Republican officeholder was spotted: State Representative Charlie McClintock, a candidate for State Senate. Also in attendance were a live horse and a giant plastic rat.

One BCTGM worker told the crowd, “For two years we were told we were ‘essential.’ Now we can’t get a fair contract to make our payments and support our families.”

Ingredion, Inc. is an international company that makes starches, sweeteners, and other materials commonly used in everyday food and beverages. It appears to be able to provide decent wages and benefits for its workers. President and CEO Jim Zallie boasted in an August 9 press release that the company’s “positive results in the first half of this year position us well to deliver a strong second half. I am extremely proud of how our global teams continue to perform in this inflationary environment.”

The company experienced its strongest quarter since 2017, said Zaille, with a net sales growth of 16 percent. Prior to the strike, workers were offered annual wage increases between 3.5 percent and 7.4 percent.

The company stopped employee insurance payments, and workers have now missed their first paychecks. “My kids are going back to school next week,” said employee Luke Gronewold, who has been on the picket line every day. “We deserve more, and we’ll be out here until we get it.”

Another worker choked back tears as she described her 27 years with Ingredion. “We didn’t have a problem with management” until Ingredion bought the 128-year-old company in 2015 from what was formerly Penford Corporation.

Rick Moyle, executive director of the Hawkeye Labor Council, and Charlie Wishman, president of the Iowa Federation of Labor, praised the Cedar Rapids community and exhorted the crowd to keep fighting. Moyle said, “This is a union town. This is what we do. We stand up for each other.”

“One thing about the labor movement,” added Wishman, “we stand up to bullies.”

The rally ended with the crowd forming a block-long circular picket line in front of the factory. They sang "Solidarity Forever" as dust drifted down from the roof.