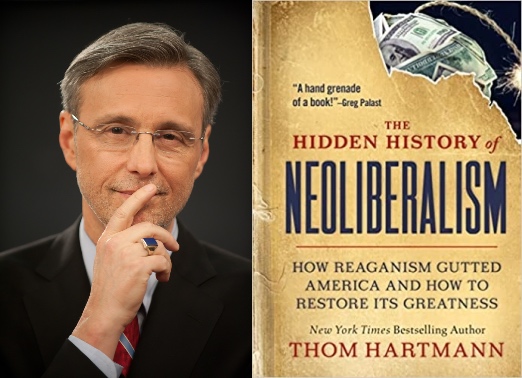 Paul Deaton is a lifelong Democrat living in Johnson County whose first political work was for Lyndon Johnson's presidential campaign.

Thom Hartmann's latest in the Hidden History Series, The Hidden History of Neoliberalism: How Reaganism Gutted America and How to Restore Its Greatness, is scheduled for release on September 13. Well-written and timely, it takes a deep dive into neoliberalism with direct application to life in Iowa.

As the guardrails are removed from our democratic republic, it is important to examine how so many Americans came to believe that government should have only a minimal role, if any, in our economic life. Hartmann's new book fills that need. Not only does he explain what neoliberalism is, he explains why it is time for us to turn our backs on it.

My focus is on Iowa and the recent Republican rout of Democrats by taking the governor's office and large majorities in both chambers of the legislature. Without saying what they were doing, Governor Kim Reynolds and her GOP allies embraced the neoliberalism principles about which Hartmann writes.

Their policies include reducing taxes, gutting government spending, reducing licensing requirements, and other tactics to minimize the impact of regulations on business and enable the invisible hand of the global free market to work its magic. For goodness’ sake, Grover Norquist even co-authored an opinion piece in the Cedar Rapids Gazette in June to celebrate the latest regressive Iowa tax cuts!

Reading Hartmann brought this aspect of the Republican culture war into focus. It is neoliberalism at its zenith.

If Iowa Republicans had their way, society as we know it would be dissolved, leaving scattered family units headed by white, male patriarchs. Such families would have many children. Women might well take a subservient role to men in public life.

If you listen to Republican rants from the state capitol, they already believe their chosen tribal relationships are in place. If Republicans declare war on trans people, or others who don’t lead what they consider to be a traditional life, they will fight until every one of them has been run out of the state or marginalized. It’s a crusade.

Like all the books in the Hidden History series, The Hidden History of Neoliberalism is a great weekend read with depth of thought hard to find on television or radio. I’ve been reading Hartmann’s series for the last couple of years, and each time his explanations and historical research bring something new to my attention.

For example, I lived through the U.S. plot to overthrow Chilean president Salvador Allende, the C.I.A.-backed military coup by Augusto Pinochet, and the restructuring of Chilean society by Milton Friedman and his gang of Chicago school neoliberals. Hartmann highlights the relevance of Friedman's work during this fifty-year-old event to today’s Republican governance. "The blank slate of a new Chile offered the perfect laboratory for Milton Friedman's Chicago Boys to try out their exciting new neoliberal experiment," Hartmann wrote. Neoliberals have been hard at work creating a radical, right-wing culture that seeks to dominate our politics.

According to Hartmann, America could go one of two ways: continue down the road to neoliberal oligarchy, as supported by the GOP, or choose to return to FDR's Keynesian economics, raise taxes on the rich, reverse free trade, and create a more pluralistic society. The Hidden History of Neoliberalism is a primer on how the United States got to this point.

In a June 29 interview, I asked Hartmann what progressives should do about the clear and present danger of neoliberalism.

"The best way to combat what they are up to is expose it," he said. If Democrats would speak more loudly, in a consistent enough fashion, they could easily organize people against the Republican policies of supporting great wealth, and white, male supremacy. Hartmann acknowledged getting Democrats to focus on a single thing is complicated.

Hartmann is essential progressive reading and I recommend The Hidden History of Neoliberalism. While readers await the new book, the others in the series can be found at HiddenHistorybooks.com.

Thom Hartmann is a four-time winner of the Project Censored Award, a New York Times bestselling author of thirty-two books, and America’s #1 progressive talk radio show host. His show is syndicated on local for-profit and nonprofit stations and broadcasts nationwide and worldwide. It is also simulcast on television in nearly 60 million U.S. and Canadian homes.

To buy a copy of the Hidden History of Neoliberalism: How Reaganism Gutted America and How to Restore its Greatness, click here. The book will be available starting September 13, 2022.