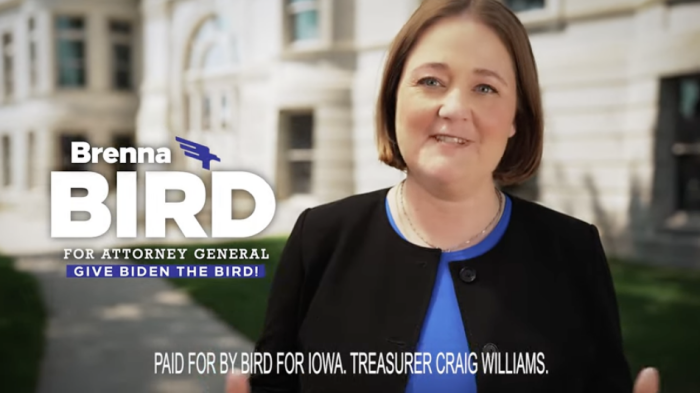 Brenna Bird's tv ad is over the top

The old saying, “Imitation is the sincerest form of flattery,” seems true. TV executives find the formula for a hit medical show and then order five more imitators. If one Marvel movie superhero captures our imaginations, why not dig a little deeper into the comic book vault for a dozen more?

Political commercials also imitate. For example, how many right-wing politicians shooting guns can the voters watch? How many east or west coast politicians running for president do Iowans need to see dressed in flannel shirts sitting on bales of hay proclaiming their undying love for ethanol? If it worked once, consultants repeat, repeat, and repeat again.

One political imitation ad recently caught my attention. It tries to catch the vibe of Joni Ernst's “Make 'em squeal” ad from her first U.S. Senate campaign in 2014. Shock the viewer with crude humor, but with smiles all around. After all, if it worked for a little-known state senator from Red Oak, maybe it will work for a little-known county attorney from Guthrie County.

I’m talking about the introductory television commercial for Brenna Bird, the Republican nominee for attorney general who will face incumbent Tom Miller.

The spot is running frequently statewide, including northwest Iowa, once represented by Brenna Bird’s boss Congressman Steve King. Her “Give em the bird” ad is both a play on her surname and a message directed at hard-core Trump nation.

Ernst constructed an image as a tough Iowa farm girl who would go to Washington and bring common sense to the halls of Congress. She told stories about keeping her feet dry with bread sacks, she rode a Harley, and she shot a lot of guns. Her attack was on a target far away.

But Brenna Bird isn’t running to make laws and clean up the legislature. She is running to be the person who upholds the laws made by the legislators and adjudicated by the court. It’s a completely different job, that calls for enforcing the law uniformly and fairly. Iowans expect their attorney general to be nonpartisan.

Three messages in the Bird ad made me shiver even in 95-degree weather.

First, the voice-over says, “She is the tough as nails prosecutors that criminals and liberals fear the most.”

Not only does she lump liberals and criminals together, but she also suggests it’s fine for Iowa's chief law officer to be biased against liberals. Will she prosecute liberals more aggressively than her right-wing friends? That’s what the ad implies.

Iowans Bird regards as liberal shouldn’t have to fear the attorney general just because of political ideology. Perhaps some in her party would like to make liberalism a crime, but that hasn't happened yet.

The voice over also says, “She’ll protect Iowans from the Biden agenda.” Last time I checked, that’s not the attorney general's primary role. Then again, maybe attacking liberals and stopping President Joe Biden's agenda is what Governor Kim Reynolds meant when she said, in a rare moment of candor, “I want my own AG.”

Judging by this ad, Bird will not hesitate to be the governor’s lawyer instead of upholding the law for all Iowans. That makes me wonder if Bird is really mimicking Donald Trump's AG Bill Barr, rather than Ernst.

The ad's narrator also says, “She’ll stand with law enforcement and always back the blue.” Really, she’ll back the blue even if an officer decides to put his knee on a suspect's neck for more than nine minutes? Police officers deserve our respect, and I understand Iowa's chief law enforcement officer needs to work with them. But demagoguery like “Back the Blue” (or for that matter “Defund the police”) isn’t good public policy.

Prosecutors must use fair and independent judgement about how and when to prosecute a suspect. If the Attorney General's office rubber stamps the police no matter what, we’ll have even more miscarriages of justice.

Finally, the ad is crude and too cute for a political party that pretends to be the party of family values. If Bird wins, and her victory is attributed in any way to this ad, no one will ever be able to utter the phrase “Iowa nice” with a straight face again. Frankly, the ad reminds me of some of the antics from sophomore high school students trying to be cute.

Yes, there is a stark contrast between Miller and Bird’s personalities and policies. But this ad doesn’t seriously address either.  Instead, Bird would rather pretend she is running against Joe Biden. In this hyper-partisan environment, it might be easier. Biden seems vulnerable, while ten-term incumbent Miller is hard to peg as an evil partisan.

This commercial makes Bird seem like the kind of person who spends her days shouting at the moon because it isn’t as bright as the sun.

Miller is the opposite. Even though he might be regarded as bookish and bland, he has won election after election, even in some Republican wave years. It’s because of his quiet professionalism and competence.

If Bird were an ice cream flavor, she’d probably be something like horseradish and pickles, while Miller would be a single scoop of vanilla.

Let me clarify something, so readers don’t think I’m a snowflake who’s easily offended. I believe negative political advertisements are fair if they are attacking an opponent on what they’ve done, what they believe, or what they’ve voted for—as long as the attack is accurate. Defining your opponent based on those things is a time-honored tradition in American politics.

Negative ads that aren’t ethical are those that are outright lies and based on nothing the opponent has said, done, or believes.  Those are usually ads reserved for the last hours of a campaign when it’s too late for an opponent to answer. That’s dirty and it says more about the candidate doing it than the candidate being attacked.

Iowa deserves an attorney general who will independently uphold the law. We don’t need a chief law officer who will do the governor’s bidding and spend her days fighting the president. If Brenna Bird wants to do that, she should run for the U.S. Senate or House, not for attorney general.