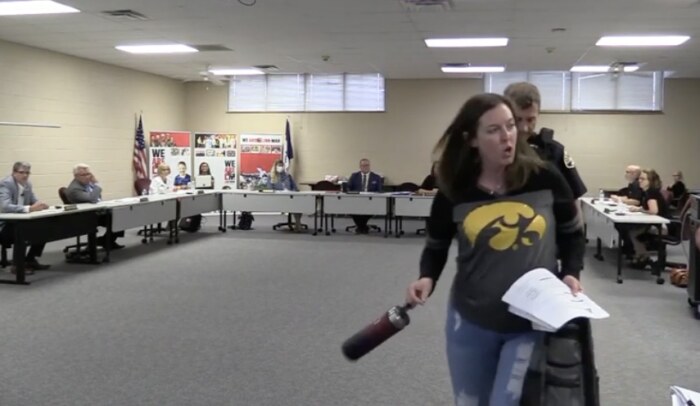 When "reasonable" takes a turn that is not

But events in recent weeks show government officials are not always following what many Iowans would think the term means. And when government officials deviate from “reasonable,” they should not be surprised if their standing or the stature of their agency suffers in the public’s eyes.

A Marion woman sued the district last week after she was prohibited from attending Linn-Mar school board meetings for the next 12 months. She also was informed Marion police have been notified of her ban—a not-so-subtle caution that she could be arrested if she ignores the ban.

What was Amanda Pierce Snyder’s infraction? Her “disruptive and disrespectful behavior,” Superintendent Shannon Bisgard and school board president Brittania Morey said in a letter notifying her of the punishment.

Snyder spoke up at the board’s public meeting on August 29 when members began talking about a contract with a consulting company, TILL360 LLC. The company was being hired to provide students with programming focused on social and emotional learning.

What got Snyder in hot water was asking an uncomfortable question of the board: How are parents to know if they want their children to sit in on the presentations by the company's speaker if parents would not learn about the specific content until after some of the presentations occurred?

Morey then ordered Snyder to stop talking. Snyder persisted, saying, “You are not listening to me.” Morey banged her gavel and responded, “You have to leave now, ma’am. You have disrupted the meeting, per Iowa law.”

Editor's note from Laura Belin: Here is the relevant portion of the school board meeting. It starts around the 1:31:00 mark of this video.

Yes, Iowa’s public meetings law gives a government board the authority to enforce “reasonable rules for the conduct of its meetings.” Yes, while the public has a right to attend those meetings, people do not have a right to speak there.

But is a year-long ban on attending future meetings reasonable?

Nothing in the law requires a board president to direct a police officer to remove a spectator for speaking without first being recognized. Nothing in that law prevents the board president from hearing an audience member’s question and answering it—especially in a school district that has been wrought up over a policy on supporting students who identify as gay, lesbian, or transsexual.

In the past couple of years, some of Iowa’s K-12 school districts have become boiling cauldrons of controversy over COVID-19 mitigation policies, mask-wearing, LGBTQ issues, school library books, and how race and equity issues are addressed in classes.

With that backdrop of issues, it is not surprising officials like those serving on the Linn-Mar school board have frayed nerves when they are faced with another parent upset over another topic. But it also should not surprise school officials these controversies have energized parents and grandparents who are demanding to be heard.

Given the highly emotional topics school boards have been dealing with, prohibiting a parent from attending meetings for a year seems extreme. Is a ban likely to help heal the divisions within a school district? When a school board takes such harsh action, it merely serves to heighten the feelings of some parents that their school officials are not listening.

That was what Amanda Snyder told the Linn-Mar board. In her lawsuit, her attorney provided context about her concerns: “Despite its benign sounding name, social and emotional learning is terminology for embedding divisive race and gender ideology into all aspects of a school’s curriculum.”

Snyder’s lawsuit brings up the matter of her freedom-of-speech rights and her right to petition her government under the U.S. and Iowa constitutions. Her attorney, Alan Ostergren of Des Moines, wrote, “Government officials cannot discriminate against those who speak or petition the government because of the particular viewpoint of the speaker or petitioner.”

Translated, that means: The Linn-Mar school board cannot gavel a parent into silence or have her escorted from the room by a police officer when she speaks without permission to criticize a planned school program — unless the school board is prepared to take similar action against a parent who rises without permission to praise school leaders for their foresight and skill in crafting the district’s controversial LGBTQ policy.

Ostergren wrote in Snyder’s lawsuit, “A ban on attending future board meetings for a single comment at a board meeting could not, under any circumstances, and no matter the form it was issued, be a ‘reasonable rule’ for the conduct of an open meeting.”

The attorney's logic does not seem unreasonable.