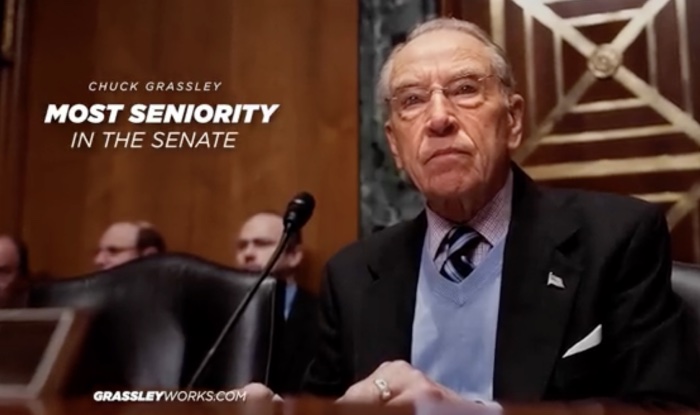 Dan Guild is a lawyer and project manager who lives in New Hampshire. In addition to writing for Bleeding Heartland, he has written for CNN and Sabato’s Crystal Ball. He also contributed to the Washington Post’s 2020 primary simulations. Follow him on Twitter @dcg1114.

Ann Selzer commented on her latest Iowa Poll of the U.S. Senate race for the Des Moines Register and Mediacom: "It says to me that Franken is running a competent campaign and has a shot to defeat the seemingly invincible Chuck Grassley — previously perceived to be invincible."

The gold-standard pollster's statement will shock many political observers. Forecasters that issue ratings on Senate races have uniformly discounted any chance that Chuck Grassley will lose. This race is simply not on the national radar. Since 2016, Iowa has seemingly marched inexorably toward becoming a red state.

But 2022 is a confusing year. The last four mid-term elections have been a disaster for the party that held the presidency. Inflation is at levels not seen in decades. President Joe Biden's approval rating was below 40 percent nationally until recently. Those factors should produce a Republican landslide. That may happen.

Yet polling in Senate races that were close in 2016 and 2018 do not show evidence of that landslide yet. Generic ballot Congressional polling shows the Democrats on average running even, and sometimes taking a small lead.

Why? Certainly part of the answer is the U.S. Supreme Court's decision in Dobbs, which has energized the Democratic base. The best evidence for this hypothesis came from the rural areas in Kansas, where the future of abortion rights was on the ballot in early August.

More broadly, it may that the status quo just is not popular. Americans are unhappy with their politics and the state of their nation (the later can be seen in questions about the direction of the country).

The table below contains the recent Senate polling in Iowa.

Comparing the Selzer poll from July to the one released this weekend, Grassley's number showed very little movement (down 1). Franken went from 39 percent support to 43 percent now. That is almost certainly a result of him becoming better known.

Can he win? One has to wonder how much Franken can grow, given that his 43 percent is close to what Biden received in Iowa in November 2020.

It isn't hard to see these two things as connected. The obvious line of attack is for Franken to paint Grassley as out of touch—a powerful argument to make against an incumbent.

For Grassley, the response is obvious. The Des Moines Register has not released Biden's approval rating in the new poll yet, but Selzer's previous surveys found the president well below 40 percent.

Even here, Grassley's ability to use Biden as a foil may be limited. Emerson found Biden's approval rating among independents was 31 percent, with 51 percent disapproving. Yet in the Emerson polling of the Senate race, Franken ran basically even among independents (39-41). Selzer found Franken ahead among independents (46 percent to 35 percent for Grassley).

Two pollsters shown in the table above are partisan. Cygnal works for Republicans. The firm had a pretty good record in 2020 but has not polled Iowa before this cycle.

Emerson was among the better pollsters in Iowa in 2016 and was more accurate than Selzer in 2018. Emerson's last Iowa poll from 2020 missed badly in both the Senate and presidential races.

Iowa's experience in 2016 and 2020 was an unusual one from a polling perspective. In both years the race looked close but was not in the end.

Could that happen again, with what looks like a close Senate race now? To answer this question I looked at Selzer's polling history. What it tells us: 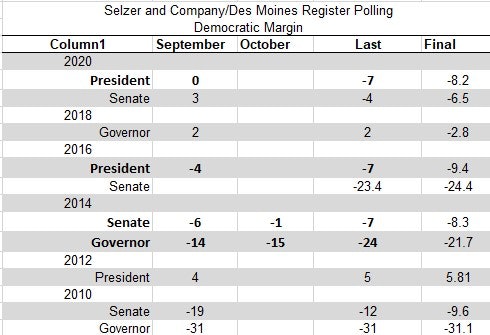