Senate Democrats are running ahead of Biden. Will it be enough?

Dan Guild is a lawyer and project manager who lives in New Hampshire. In addition to writing for Bleeding Heartland, he has written for CNN and Sabato’s Crystal Ball, most recently here. He also contributed to the Washington Post’s 2020 primary simulations. Follow him on Twitter @dcg1114.

This post will present the state of play in the U.S. Senate races as of November 4. The data includes all polling available at 7:00 am Eastern; polls are released so frequently that it is impossible to analyze the situation without stopping.

Before we get to the survey numbers, though, we need to consider the environment in which these elections are taking place.

For the first since the early 1980s, inflation has become a salient campaign issue. Few things are as toxic to the in-power party as inflation, and as we will see in a minute, that presents a significant headwind for Democrats.

The chart below (based on work I did for Sabato's Crystal Ball) explains just how strong this headwind is. In the ten Senate races since 2006 involving an incumbent or open seat held by the president's party, where the president's approval rating was under 40, nine have lost.

Surprisingly though, if the president is above 40 percent job approval, the incumbent candidate is more likely to win than lose.

What is astonishing is how closely they track the 2020 numbers. Biden's nationwide approval is 42 percent in my data, 9.4 percent lower than his 2020 vote share nationally. The state job approval numbers are amazingly consistent with this, and with the exception of Ohio (where is not a lot of data) shows just how much this race is being dictated by national shifts.

I want to focus on the last two columns. For the most part, Democratic Senate candidates are running ahead of Biden's approval rating by between 5 and 7 points. That is consistent with what I found when I wrote for Crystal Ball about Senate elections from 2006 to 2018.

But the far-right column is most eye-opening. Republicans are running well behind Biden's disapproval rating. Two weeks ago, that was largely because some candidates (Blake Masters in Arizona, Mehmet Oz in Pennsylvania, Herschel Walker in Georgia) had failed to consolidate the GOP base. That has changed, though J.C. Vance's weakness as a candidate in Ohio is apparent.

Note too that the lowest gap is Wisconsin, where an incumbent Republican is running. Not surprisingly, Ron Johnson has consolidated the anti-Biden vote the most. But the question lingers: has he exhausted that vote? The race in Wisconsin is still close.

Why do candidates run ahead of their president? About 3 percent is attributable to Democrats who disapprove of Biden but are supporting the Democratic candidate. That includes almost all of the gap between Biden's national approval rating and Democratic generic ballot performance.

The other reason is more complex, and probably holds the key to who wins. This data is noisy, but what is really striking is how bad Biden's job approval among independents is in the battleground states. I went back and looked: Barack Obama's approval rating in 2010 was a full 7 points better than Biden's now.

These races should be easy for Republicans to win. But in the column furthest to the right, you see the impact of bad candidates. The U.S. Supreme Court's decision in Dobbs, which rolled back abortion rights by five decades, is almost certainly a factor here.

There are other keys to next Tuesday. The data suggests Democrats have held onto their margin among those under age 30. Will they show up to vote? In 2014, youth turnout collapsed. But in 2018 it was as high was we have ever seen in a midterm. For every 1 percent increase the share of the 18-29 vote, Democrats increase their share of the vote by two-thirds of a percent.

The Hispanic vote will be key in Arizona and Nevada. Here the data is ambiguous—though for the most part, the Democrats do appear to be holding onto their share of the vote.

This next charts shows the state of play broken out by pollster type.

As I noted in my last Bleeding Heartland piece, pollsters with right-wing leanings have released an enormous number of polls, making up as much as half of the average in some states. The importance of that becomes pretty clear. Right-wing associated pollsters show the Democratic candidate ahead only in Arizona.

By contrast, the non-partisan pollsters show the Democrats with decent leads in Arizona, Georgia, and New Hampshire. Someone is going to be very right or very wrong on Wednesday morning. There is no way to square most of this poling.

One final point. I mentioned this the last time I wrote here, and want to emphasize: we really do not know who is going to win these Senate races. Talk of a "wave" at this point goes far beyond our ability to predict elections. 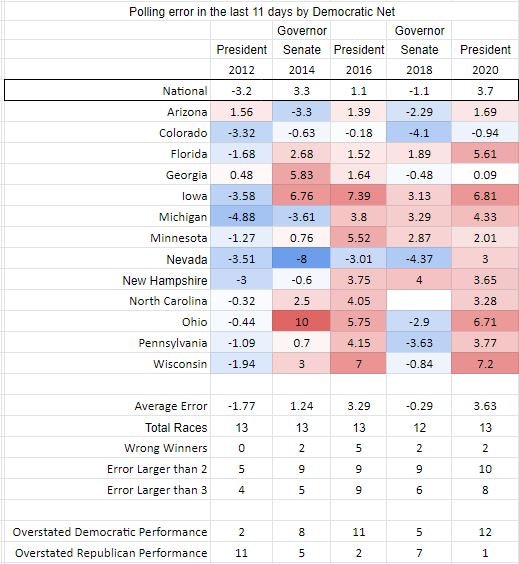 NOVEMBER 7 UPDATE: Here's the final version of the chart, including all polls released before the 2022 election. If the non-partisan polls are right, a runoff in Georgia will decide control of the Senate, after Democrats pick up Pennsylvania and Republicans pick up Nevada.

If the Republican polls are right, Democrats will lose the Senate seats in Georgia and Nevada, and New Hampshire will be a nail-biter.

A good night for the Democrats would involve picking up Pennsylvania and Wisconsin, with Ohio and North Carolina close. 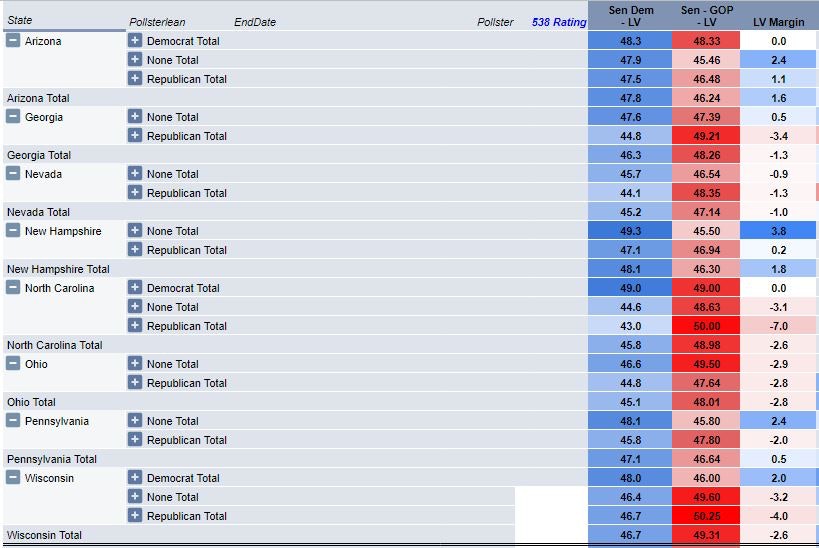 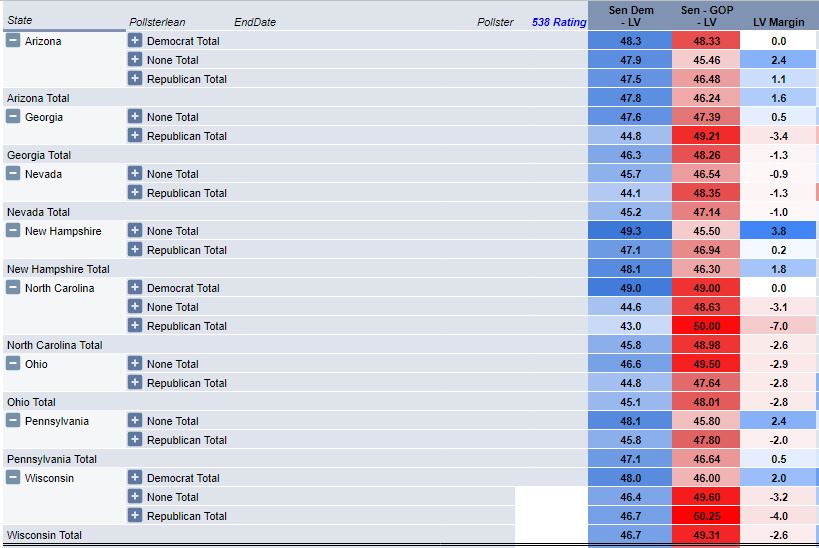