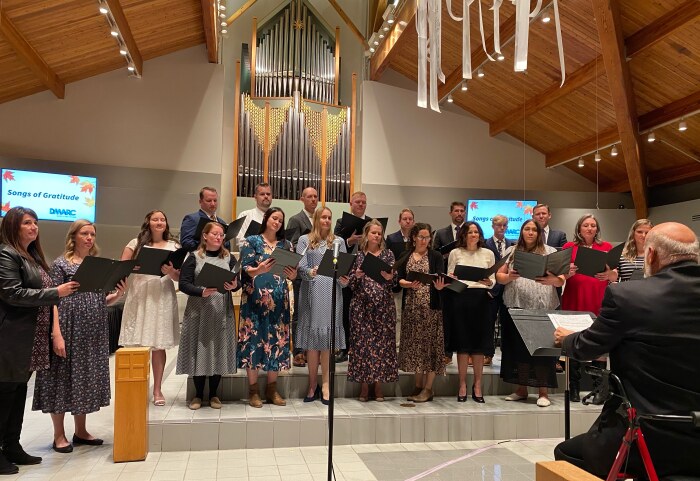 Seeking accord, from "Oseh Shalom" to "Oprosti Ya Rabb"

A program for the Sunday before election day offered “Songs of Gratitude” at an Interfaith Thanksgiving Celebration. Perhaps the subtle theme suggested giving thanks instead of lying about the other candidate.

Regardless of intent, I thought the program could provide some “Pre-Traumatic Stress Relief” to offset the “Post-Traumatic Stress Disorder” that loomed in the aftermath of the midterm elections.

In truth, you could select words from any of their songs and be hard pressed to identify which faith or belief system was the source of such thanksgiving, praise or repentance, and a few thanks again. The West Des Moines Christian Church Ensemble offered the first verse of Psalm 106, peppered as it is with “thanks.”

That seemed to provide some of the relief needed to cope with the anger and hate that so dominated political advertising and campaigns for the past several weeks.

The First Unitarian Church of Des Moines summed up the theme for the evening in “We are one." The words were simple enough: “When we laugh, when we sing, we are one, when we cry, when we run, we are one.”

A Lutheran Church of Hope trio offered, “All people who on earth do dwell sing to the Lord with cheerful voice.” The Immanuel United Methodist Church choir was right on cue: “I will give Joyful Thanks.”

Soloist Benjamin Brodkey from the Jewish Federation offered these words from "Oseh Shalom" (Make Peace): "May the One who makes peace in the heavens descend on us, and the world will say: Amen."

A trio from the Bosniak Muslim Mosque in Granger offered words from "Oprosti Ya Rabb" (Forgive Me, My Lord): “Forgive us, Ya Rabb, Our sins and mistakes. On the right way turn our face ... Mercy, greater than anger, is only Yours.”

Patrick Minor, who works in the Des Moines Area Religious Council's mobile food pantry program, offered a folk song, "93 Million Miles," which refers to the average distance between the Earth and the sun:

Every road is as slippery slope.

There is always a hand that you can hold on to.

Looking deeper through the telescope

You can see that your home’s inside you.

That wherever you go,

You will always get back home.

To remind us of home and the blessings we may ignore or squander, the choir of the Church of Jesus Christ of Latter Day Saints Mt. Pisgah Stake sang “For the Beauty of the Earth."

And to give credit where it’s due, Leah Cope of the Des Moines Stake of Latter Day Saints played the prelude and postlude. Violinist Monday Jefferson of Faith Lutheran played Mozart’s 1775 Violin Concerto in G, his “Turkish” concerto.

The Rev. Sarah Trone Garriott, DMARC’s coordinator of interfaith engagement, organized the “Songs of Gratitude” program. Talk about election stress: she is also State Senator Sarah Trone Garriott, who was embroiled in one of the most competitive Iowa Senate races. (Her legislative involvement was not mentioned during the event, and voters in Senate district 14 elected her two days later.)

Friction abounds between political parties as well as religious faiths. And the healing title “We are one” is not limited to one song. In fact, “We Are One” is also the name of a song from the musical and movie "The Lion King." Although it's not a church hymn, it too offers thoughts to ease pre- or post-trauma conditions.

As you go through life you'll see

There is so much that we

And the only thing we know

The way we planned

But you see every day

That we'll never turn away

When it seems all your dreams come undone

We will stand by your side

We are more than we are