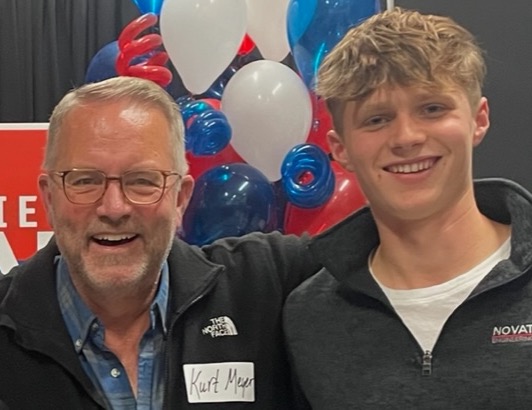 Reaffirming my faith in politics

Some people live in town and have a second home on a lake or in the country. For almost two decades, we’ve reversed these items. Our primary residence is in rural North Iowa – in the country – with a turnkey town home in the greater Minneapolis area. There, for the last ten weeks, we’ve provided “supporter housing” for a political campaign worker in the Twin Cities.

Accommodating this short-term boarder was not demanding duty. We’re often not there, more true recently as delayed travel plans were rescheduled for earlier this fall. Furthermore, providing temporary housing is consistent with a vague “transition strategy” as we seek different ways to support causes we believe in.

Let me explain how this relates to politics.

For two decades, we’ve been grassroots activists… knocking doors, making phone calls, sending emails, and so on. For me, this included two gloriously unsuccessful candidacies and campaigns (sigh) and chairing various political / advocacy organizations. For the next two-plus decades, God willing, we intend to stay involved… but in different ways: hosting events, attending (not necessarily leading) meetings, writing checks, and when possible, providing lodging for candidates and their supporters.

Which brings me to Lou. He’s eighteen years old, from Cambridge, Massachusetts, taking a gap year between high school and college—in his case, Harvard, where he’ll start next fall. Since August, Lou has stayed with us, one of several unpaid “fellows” supporting U.S. Representative Angie Craig’s reelection campaign. First elected in 2018, Craig represents Minnesota’s second Congressional district, which includes southern Twin Cities suburbs and southeastern Minnesota counties along the Mississippi.

So, what did Lou do during his ten-week assignment? He oversaw distribution of 2,000 Craig yard signs. He often served as the candidate’s driver, a rather heady assignment for a recent high-school graduate. And he knocked doors, made phone calls, and assumed myriad mundane tasks of a congressional campaign. While we didn’t watch Lou while on duty, we can vouch for the fact that he’s smart, engaging, and well-mannered. We’ll miss him greatly when he leaves.

When Lou first arrived, I asked about his motivation, why he came to Minnesota to volunteer for ten six-day weeks, twelve-hour days. He said he considered a Senate campaign but realized his impact would be minimal. He preferred a close House race, hoping in some small way he could make a difference. And he’d not yet been to Minnesota; like many young people, Lou was ready for adventure.

In light of disappointing (to me) Iowa results, Lou has helped reaffirm my faith in politics… and in humankind. His easygoing nature is balm for painful losses. His commitment rekindles my desire to stay involved. His maturity reflects positively on an age demographic that will soon have more say about our country’s direction than my cohort.

Having done comparable work when I was a few years older than Lou, upon reflection, the residue from these experiences is meaningful relationships forged by campaigns. Supporting evidence: Paula and I recently drove 400 miles round trip to spend an afternoon with friends we met more than four decades ago through a campaign. Just last week, I was a guest in another friend’s home, an enduring relationship rooted in a 1976 campaign.

Paula and I aspire to be among Lou’s 2022 takeaways, acknowledging he has already gifted us more than we’ve given him. I’m eternally grateful for young men and women who devote themselves to a political campaign. I’ve known many examples over numerous election cycles; they continually motivate and inspire me.

By midnight on Election Day, the outcome in Representative Craig’s race was known. She was reelected by five percentage points, twice her victory margin two years ago. When I asked Lou his first reaction to this just-completed campaign, he answered, “I have hope!”

Me too, Lou, me too. By simply being who you are, you’ve reaffirmed for me so much of what is good about America. And I’m thankful.

Top photo of Kurt Meyer (left) with campaign volunteer Lou provided by the author and published with permission.

Photo of Angie Craig at her victory party, taken from her campaign's Twitter feed. 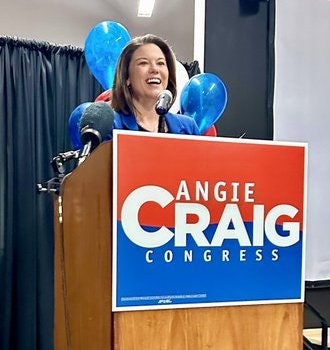 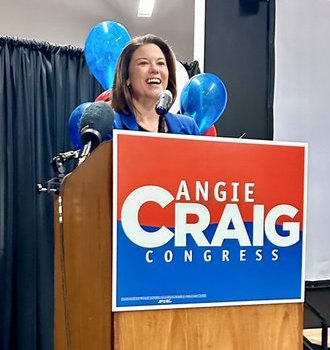