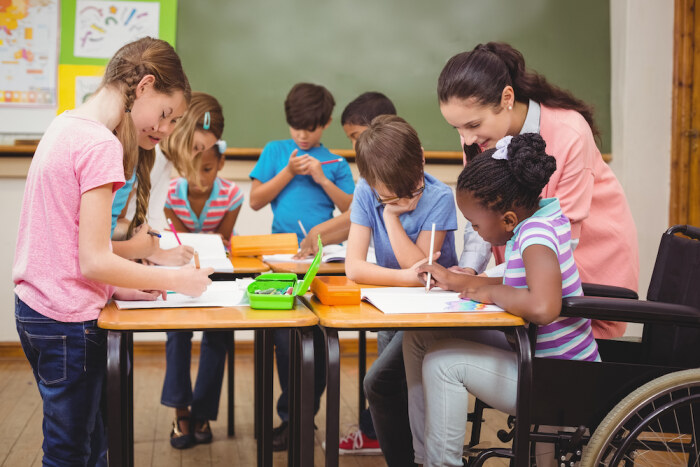 It's a unique profession

Bruce Lear lives in Sioux City and has been connected to public schools for 38 years. He taught for eleven years and represented educators as an Iowa State Education Association Regional Director for 27 years until retiring

There really are some jobs your guidance counselor never imagined. For example, some people work as professional cuddlers for those struggling with loneliness, depression, and trauma. Some are paid to test water slides at resorts and hotels, to make sure they are safe and fun. Specialists ghost write online dating profiles for people short on writing skills, but long on virtual romancing. And there are even professional bridesmaids, for the brides with few close friends but big wedding plans.

All a bit strange, but real occupations held by real people.

Teaching isn't as unfamiliar as those jobs, but it is unique from other professions in at least four ways.

Unlike doctors, dentists, or lawyers, teachers don’t have waiting rooms where they deal with problems one at a time. Teachers often deal with 30 problems aired by frustrated students, and they do it all at once in rapid fire. No time for contemplation or self-doubt.

I remember when I began teaching junior high, I gave the students time to work on their assignment before the bell. I sat down at my desk with my head down grading papers. First rookie mistake.

Soon I was silently surrounded by students holding papers. I was trapped by 7th graders demanding answers. Second rookie mistake.

Researchers say teachers make more than 1,000 decisions a day, more than any other profession. Many of those decisions happen in front of 30 pairs of eyes. If the teacher makes a mistake, there will be many witnesses.

If patients or clients won’t take advice from their lawyers or doctors to stop doing what’s hurting them, society chalks it up to personal choice. If students won’t do assignments, study for tests, or even show up for class, the teacher must be at fault for not motivating them.

I’ve represented hundreds of teachers where the administrator starts by saying, “We want rigor in the classroom.” Then after a few weeks when parents complain about low grades, and homework, that same administrator asks, “Why are so many students failing?”

The rigor lecture is forgotten, replaced by the appeasement lecture that would make Neville Chamberlin blush.

The trend toward letting parents run public schools in Iowa is flourishing, not because it’s positive for kids or even parents; it’s because politicians see this as a political wedge to get elected. It’s easier for “Mama Bears" and their cubs to blame teachers in “government schools” than take responsibility for being partners in their own children’s education.

A pulse is good enough

When we need a plumber, we look for the person who has the best reviews. When we’re sick, we look for a hospital with a good reputation. We only shop at a car lot that our friends tell us will make a fair deal.

Why then, do politicians think anyone with a pulse can teach?

They are making a political decision, not an educational one. Deciding everyone can teach seems to provide a quick, cheap, fix for a complex and expensive problem. Not enough people are entering the teaching profession from college, because the pay is less than they can earn in another career, and the workload is often staggering.

The idea, that because a person is interested in something, they should try it with no training is like saying I watch a lot of medical shows, I think I’ll dabble in surgery and see how it goes.

Do we really think it’s a good idea to turn our kids over to a teacher for seven or eight hours a day who has no training in how students learn, no student teaching, and just decided to take the job because it looked fun and easy?

That’s what both Arizona and Florida have done by allowing teachers with no degree and no experience to be called teachers. My guess is many states, including Iowa, will go this quick fix route, and then argue there’s no need for teacher raises since they don’t even need a college education anymore. Do politicians who pass these absurd laws think the outcome will be great for kids? No, they just want a problem to go away fast.

But it harms students, the teaching profession, and our communities.

It’s hard to be sick

Teaching is one of the few jobs where it’s easier to go to work not feeling well then to explain what a substitute should do. Substitute teachers play a vital role in the education family, but they’re not the same as having the full-time teacher in the classroom following their own plans with their own style.

That’s why substitutes following a teacher’s lesson plans often won’t work. Imagine a non-math person trying to teach high school calculus or a retired shop teacher subbing in a first grade, or someone tone-deaf teaching music. So, it’s up to the teacher who’s sick to find alternative activities a substitute can do. That takes work and creativity while feeling ill. It’s hard.

Teaching is the unique profession that makes all other professions possible. Teachers don’t resist honest, fair accountability. But the legislative oversight by the current majority party isn’t accountability, it’s bullying. If this continues, the word “shortage” won’t be a big enough word to cover the number of classrooms full of kids missing a qualified teacher.

During the pandemic, society learned how important public schools and teachers were to not only students, but to the fabric of our communities. As Iowa lawmakers prepare to convene again in January, they need to consider the value of good public educators. Stop passing laws in search of a problem, and begin honoring a unique and essential profession.